O Brother, Thou Got It! 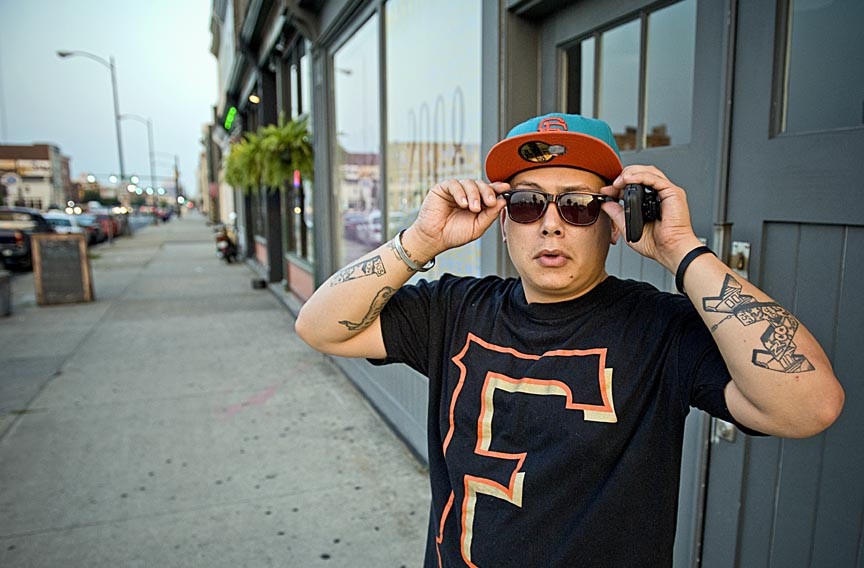 Noah O is in no rush to throw money in the air.

He doesn't need to borrow jewelry, or rent Lamborghinis or Ferraris for his music videos. Having just turned 30, the stocky, Henrico-based rapper would rather keep it real and represent — as in wearing a Richmond Flying Squirrels cap and drinking Pabst Blue Ribbon.

O, whose real name is Noah Oddo, knows how much work it takes to make it in show business, and how few people ultimately do. He's been a student of rap since he was 14, winning regional emcee battles and working a variety of jobs for Clear Channel and local radio. He also started a production company, Charged Up Entertainment, which soon will move into a new location across from the Science Museum of Virginia.

The video for his Virginia-friendly party anthem, "I Got It!" (featuring friends Streetz Deep and J-Nero) is in regular rotation on MTV Jams, without the benefit of a major label. His company sent the results to a group that screens for MTV and paid it to close-caption the video. But it was a random Tweet from one of O's production team members that did the trick: catching the attention of a secretary at MTV who helped push it along at programming meetings.

While his friends are ecstatic, O remains as cool as the other side of Bill Clinton's travel pillow. Sitting on a bench outside of the Camel on Broad Street, the club where the video was shot and where he holds monthly hip-hop nights, O converses about the state of hip-hop in Richmond.

"We're building a scene, a movement right here. The Camel, Strange Matter, Alley Katz — they all cater toward the artists throwing shows versus some nightclubs who just spin hip-hop," he says, taking a drag off a Newport. "You get a different element at live shows. It's not just people who want to get drunk and meet females. The people in my video, they actually know the music."

For two years, O has been pushing "I Got It!," which he wrote and had produced by Big Boyz Entertainment in Atlanta. He promoted the song primarily through nontraditional avenues such as blogs, YouTube and other new media. "I'm using the new model. In the past you had to go to the radio or people wouldn't know," he says. "Now it's grass roots."

O was raised in San Francisco by a Filipino mother, who befriended Sly and the Family Stone and hung out at their garage practices, and a hippie father from Virginia with Sicilian roots. They moved to Richmond when he was in the seventh grade. The young teen immediately started getting in trouble and bouncing around schools — Hermitage, Virginia Randolph, Highland Springs. "It was culture shock. Out in California, in a poor or dangerous area you get all kinds of people. Here, it seemed like it was mostly black folk," he says. "People noticed my race more." At the same time, his mother helped steer him toward creative writing, focusing his efforts on an artistic path.

O has an album's worth of material, "Struggle Muzik," ready to record if he gets a label deal or producers come calling. If not, he says he'll do it himself. Much of the feedback so far has been from other Virginia artists who want to perform in Richmond, sensing a growing scene from the video (which at press time had more than 25,000 views). The video was shot by local videographer and designer Monsee, who's designed logos for Capital One.

Interestingly, the B-side to the video single, "Oh My," features more political lyrics —opening with an Obama sample then O spitting a fusillade: "We need better health care, less dependence on welfare, new energy sources," and later, "they taxin' the middle class and givin' it to the wealthy."

The club track gets attention, O says, but he hopes to offer something more.

"I look at Tupac or Nas — they cover the full range of human emotions. People need that right now. Not just escapist, fantasy stuff," he says. "But it can't be corny or preachy. You can have the most profound thing to say, and if peoples aren't into you, they're not going to hear it. You're like a character in a movie that hooks people and makes them care about the plot."

Charged Up Entertainment, with sponsors Fox Richmond and Clear Channel, also created a community event, VyAy (Virginia Youth are Yearning) Day, which aims to curb youth violence, drug use and gang activity through the use of performing arts.

Ultimately, O would be happy to make enough money so that music could remain his life.

"I'm not in no rush to sign a record label deal," he says. "I'm a grown man, I'm not gonna sell myself short just to be prostituted and pimped and put on TV and everybody is making money except me. I wanna make the music I wanna make ... not sacrifice my art." S