Thirty years ago, the nuclear industry was mired in fear, protests and foreboding predictions. Now there's talk of a "national nuclear renaissance," and Virginia may be joining in. But a few voices are trying to sound the alarm. 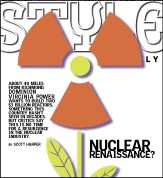 Representing groups including the Nuclear Energy Institute and the North American Young Generation in Nuclear, dozens came to the August hearing at Louisa County Middle School, about an hour's drive from Richmond, to support a dramatic request by Dominion Virginia Power.

The Nuclear Regulatory Commission already has signaled support for the project. But the state Department of Environmental Quality still must give its blessing, based on whether the plans meet coastal zone protection rules.

The domed reactors, which would sit next door to two existing ones, would cost about $3 billion each to construct. The expense could be offset with tax breaks and other incentives offered by the Bush administration, which is encouraging nuclear development.

The federal government is paying half of the tab, or about $6 million, for Dominion to seek an "early site permit," another Bush creation, intended to speed the regulatory process.

If built, the twin reactors would more than double North Anna's electricity output, enough for 1.3 million customers. They also would mean about 700 new jobs for Central Virginia, according to Dominion's estimates.

The permit, if granted, would be the first successful nuclear application from a power company in the United States in 25 years. It also would put Virginia in the lead of what industry advocates hope is a "national nuclear renaissance," untethered to Middle East oil and free of air pollutants.

The project, however, would also create more nuclear waste, which, without a permanent home, would be stored temporarily at North Anna behind security fences and armed guards.

The risk of a terrorist attack might increase, opponents argue. Lake Anna — a 13,000-acre water supply and discharge zone for North Anna where thousands of people swim, fish and live — might be threatened as well, critics say.

Built by Dominion in 1971 for nuclear operations, Lake Anna is classified by Virginia regulators as "impaired," or polluted, and opponents fear ecological consequences if two more reactors are allowed.

"We don't want to see the lake's resources destroyed," says Harry Ruth, president of Friends of Lake Anna, who lives on one of three discharge lagoons near the nuclear plant.

Ruth helped to launch the group last year out of concern over Dominion's plans. Members argue that lake levels are dropping, especially in drought times, and that water temperatures are increasing.

The state environment department regulates the main part of the lake — nicknamed "the cool side" by locals — like any other surface water in Virginia, where pollutants and other ecological indicators are carefully managed. But the state only monitors the temperature of the three wastewater lagoons located below the nuclear plant, called "the hot side" of Lake Anna. People regularly boat, water-ski and recreate in the lagoons, which can eclipse 100 degrees in the summertime.

During a recent tour of North Anna, pleasure boats cruised through the lagoons, which are browinsh in color and feel like warm bath water. The lagoons are connected by a series of dikes, allowing fish to come in and out of the waterway maze.

Dominion's state permit requires that temperatures remain below 89.3 degrees. But the state considers Dominion in full compliance despite triple-digit temperatures, because the utility has conducted a study showing no adverse impacts to fish or plants from the overly hot water, says Hayden, the environment department's spokesman.

Friends of Lake Anna want the state to start regulating the lagoons like the rest of the lake, arguing that public use of them necessitates closer scrutiny. But to do so would require a change in state regulations, Hayden says, and no such amendment has been proposed.

"They can go as high as they want, as long as there is no impact to aquatic life," Hayden says.

The state Health Department two years ago issued a fish-consumption advisory for all of Lake Anna. It cautions against eating too much largemouth bass, striped bass, white catfish, channel catfish and bluegill sunfish because of high levels of PCBs documented in tissue samples.

PCBs — short for polychlorinated biphenyls — are highly toxic compounds often associated with transformer coolants and hydraulic fluids. The state is conducting an investigation to determine the source of the PCBs, but officials say that no conclusions have been reached.

At the public hearing last month, a small gathering of environmentalists and anti-nuclear advocates, many from Charlottesville and Washington, D.C., sat together near the school's stage. In front of them was a handwritten sign that read, "Dominion Please — Clean your coal plants, No new reactors, Invest in renewables, Promote conservation."

John Cruikshank, chairman of the Sierra Club's Piedmont group, had traveled about 40 miles from his home in Albemarle County to speak.

He held up a glossy magazine promoting tourism and real estate around Lake Anna and noted that the magazine never mentions nuclear energy.

"You know why?" Cruikshank said. "Because most people do not want to vacation near nuclear reactors and nuclear waste, and for good reason."

"I've been shocked and amazed at the propaganda of the anti-nuclear groups," said Lisa Stiles-Shell, a Henrico County resident and nuclear engineer.

She said she gave up her job at the Surry nuclear plant, Dominion's other atomic station in Virginia, located on the James River on the rural fringe of Hampton Roads, to lobby for nuclear energy's future. Her comments were met with loud applause.

The majority of the audience either worked for Dominion or was sympathetic to the permit application, according to a show of hands.

The utility is by far the biggest taxpayer and largest employer in Louisa County, and as Ernie McLeod, the county's deputy administrator, said, "People around here pretty much trust what Dominion says."

Virginia lawmakers voted to allow Dominion to build Lake Anna in the late 1960s. The utility purchased 18,643 acres of rolling farmland and forest for the power station and the lake, which was to provide cooling water and a storage zone for hot wastewater for as many as four reactors.

On a recent tour of North Anna, Kemp talked about how his friends ask him, half-jokingly, if he glows from working so long at a nuclear facility.

"I tell them to come to work with me," Kemp says, "and when they do, they cannot believe how clean and orderly everything is. Their stereotype quickly goes away."

In 1979, about the time Dominion started constructing the third and fourth reactors at North Anna, the infamous accident at Three Mile Island near Harrisburg, Pa., occurred, and the U.S. nuclear industry was changed forever.

In the aftermath, Dominion decided to scrap its plans for Units 3 and 4, and the buildings were razed. Their rusting foundations still can be seen.

Probably the most publicized accident at North Anna took place in July 1987. A small amount of radiation was released into the atmosphere after a steam pipe ruptured.

The Unit 1 reactor was shut down, press conferences were held, and it took months and more than $1 million for repairs to be made, according to published reports. No one was injured.

An accident at Surry nuclear station occurred the previous year, in 1986. Four workers were killed when a pipe failed and scalding steam gushed from the break.

The Nuclear Regulatory Commission last fined Dominion for problems at North Anna in 1989, according to agency records — for $25,000, because of improper maintenance of air systems in the instrument and control rooms.

Before Lake Anna was carved from the ground, the North Anna River was a small stream that often went dry in the summer.

After the reservoir was built, it became a free-flowing tributary, which drains downstream into the Pamunkey River, then into the York River and finally into the Chesapeake Bay.

A dam controls the amount of water released downstream from Lake Anna. It is intended to keep the lake at about 250 feet deep. If it should fall to 242 feet, the power plant would lose its cooling capacity and have to be shut down, according to Dominion officials.

That's never happened. The lowest lake depth, 245 feet, was recorded during the drought of 2001-02, officials say.

When Dominion applied for its early site permit in 2003, the utility wanted to again use the lake. But after lake residents and regulators raised concerns about safety and viability, Dominion changed course.

Earlier this summer, it proposed building a $200 million wet-dry cooling tower for the third reactor, a technology seen only in Europe and Japan. Lake levels and temperatures would only be slightly affected, says Richard Zuercher, a Dominion spokesman — a conclusion that project opponents contest.

If a fourth reactor is permitted, Zuercher says, Dominion would construct a dry cooling tower, which would strictly blow air to keep reactor temperatures safe.

Such devices use high amounts of electricity and are "pretty much used only when necessary," such as in the Southwest, where water is expensive and large supplies hard to find, says John Waddill, an engineer for Dominion overseeing North Anna's proposed cooling systems.

If an early site permit is granted, construction would not immediately begin. More permits would be required, and utility executives have said the economics are not yet right to begin such a massive undertaking.

Chewning said that amid growing concerns about global warming and the possibility of government regulation of carbon emissions from coal-fired power plants, utilities must start planning for alternatives now, including nuclear.

"We currently have no plans to build a nuclear unit because the economics aren't right at this time," he said. "That could change down the road if Congress gets serious about reducing greenhouse gas emissions."

An early site permit is good for 20 years; it takes about four years to construct a nuclear reactor.

The earliest that a third reactor could start generating electricity at North Anna would be about 2015, Zuercher says. "And that assumes everything goes our way," he says, "which hardly ever is the case with these things." S

Scott Harper, a staff reporter for The Virginian-Pilot, has covered environmental issues across Virginia for the past 11 years. He can be reached at scott.harper@pilotonline.com.