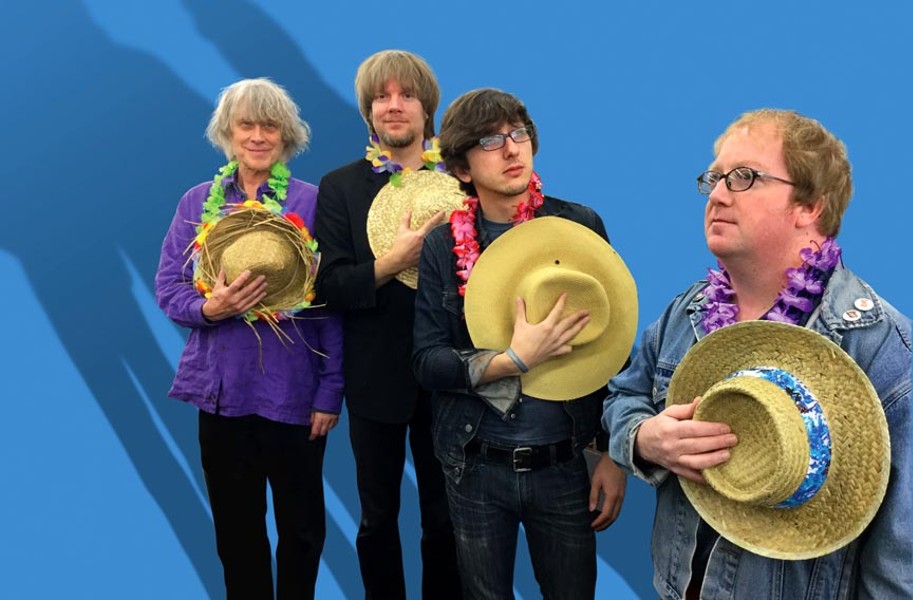 Last year when NRBQ, which stands for New Rhythm and Blues Quartet, performed at a local listening room, the Tin Pan, 24-year-old drummer John Perrin had just joined the band. It was only his second night playing, but it didn’t matter.

Immediately, there was a sense of joyful communication between the musicians, emanating especially from the sole original member and founder, Terry Adams, who was wildly animated behind a bank of keyboards, occasionally popping up from his seat to bask in the warm appreciation of the sold-out crowd.

Long known as one of the country’s greatest bar bands, the group is celebrating 50 years of genre mashing - from rockabilly and boogie-woogie blues to Beatle-esque pop and celestial free jazz - with an impressive new box set, “High Noon" (Omnivore Records) that documents their long career.

Adams decided to keep touring under the NRBQ name after surviving a stage-four throat cancer scare diagnosed in 2004. “Now we’ve got a year behind us [with the new drummer],” he says by phone. “So it’s really happening.”

He adds that any hubbub over his using the NRBQ name was erroneous. “I don’t know where that came from. … I would never even consider hurting [former members]. I’m keeping it going and it’s good for them, too. A lot of their songs are on this new set.”

The five-disc box is filled with rarities, alternate takes of classics and live cuts compiled by an archival team working with Adams. “It’s nice to go back and reconnect, it was good for my soul,” Adams says. “Everyone was putting everything they had into the music and you can feel it.”

Over the years, NRBQ’s music has earned them many fans, including the likes of Bob Dylan, Paul McCartney, Keith Richards, Bonnie Raitt and Elvis Costello. It was even the house band for “The Simpsons” television show for seasons 10 through 12, thanks to head writer and fan Mike Scully. But what makes the group more interesting than many of its peers is the confluence of influences, from Sun Ra and Thelonious Monk to famous show tunes. Also, Adams studied composing as a youth. He remembers his first lesson was to score an original song.

“When I finished playing, they all started yelling, ‘This kid’s got a hell of a beat!’” he says. “Then the composition teacher would come to a certain part and say, ‘now you’re starting to bore me here.’ [laughs]. I always remembered him saying to never get boring.”

Adams notes that musical styles were really opening up in the ’50s and ’60s, a period he considers a renaissance of sorts. He started listening to Monk and other jazz greats such as Dave Brubeck.

“Some people when they get into jazz they get embarrassed by their Link Wray or Duane Eddy albums. I kept liking all the stuff I liked in the first place,” he explains. “I can’t join clubs or some prefabricated lifestyle. I don’t like organizations that have things all figured out. I feel that way about organized religion, politics, nationalism. It’s got to come from your own spirit, somebody else can’t tell you. All the music I was absorbing becomes a part of me. This is the real me, this is me being honest.”

When he was only 18, Adams was going to Slug’s Saloon on New York’s Lower East Side to see Sun Ra and his Astro-Infinity Music every Monday night. Back then, the only people in the audience would be NRBQ members and jazz musicians like Max Roach — the music was so intense, he says.

“Sun Ra gave me a business card that read ‘myth scientist’ and had his phone number,” Adams recalls. Toward the end of ’67, Adams called and was invited to his apartment. “He said, ‘I have something for you’ and he came back with a 45 of ‘Rocket Number Nine’ and gave me a look like, ‘This is for you.’”

At the time, Adams had disbanded NRBQ and was working on a new sound.

“I played [the Sun Ra] song and it woke something up in me about more possibilities in rock and roll,” he says. A reformed NRBQ went to Florida and started covering the song live and Miami kids began chanting it. Members ended up recording it for their first album. “That was the real beginning of the way that NRBQ is perceived today,” he says.

Fast-forward half a century and Adams has performed with the current iteration of Sun Ra’s Arkestra led by saxophonist Marshall Allen — a rare honor for a white guy. “One of the members said to me, ‘you made history,’ so I don’t know if that’s what he meant,” Adams says. (He was with Sun Ra’s Arkestra at the Richmond Folk Fest last year.) Another rare distinction? Adams was responsible for getting the untrained Shaggs’ “Philosophy of the World” originally reissued on Rounder in 1980.

The new version of NRBQ isn’t coasting on former glories or covers, though — it has a new album of original material in the works. Already the band is back on the road, and Adams says that audience members have been coming up and thanking them after the polarizing November election.

“You can feel it out there, we all need the positive vibes,” Adams says. “It’s there, you just have to reach for it and bring it with you.” S