Rodriguez, “Searching for Sugar Man” (Light in the Attic/Legacy)

Sixto Rodriguez has one of the strangest stories in rock ’n’ roll. The Detroit native released two albums of psych-hazy, post-Dylan folk rock in the late 1960s and early ’70s, neither of which found much of an audience. He spent most of his life in complete obscurity, unaware that he’d become a legend in Australia and South Africa. “Searching for Sugar Man,” a new documentary by the Johannesburg-based filmmaker Malik Bendjelloul, chronicles the artist’s unlikely rise to celebrity, and its soundtrack acts as a de facto greatest hits — as long as you rethink the definition of a hit as something that has global rather than industry impact. With a sharp, authoritative voice that barely conceals or contains his outrage at the world, Rodriguez delivers lyrics full of mind-bending turns of phrase and evocative imagery on “Crucify Your Mind” and “I Wonder.” It’s no substitute for his studio albums (recently reissued by Light in the Attic Records), but this well-curated soundtrack is a persuasive argument for Rodriguez as a lost American star. — Stephen M. Deusner

Brad Mehldau Trio, “Ode” and “Where Do You Start” (Nonesuch)

When he emerged in the ’90s, Mehldau’s melodic beauty, realized in an impressionistic harmonic and rhythmic context, made him seem like the second coming of piano giant Bill Evans. Since his 2005 replacement of the percussive poetry of drummer Jorge Rossy with the hyperpatterned prose of Jeff Ballard, the misty comparisons no longer seemed as apt. During the past seven years the band has forged a unique approach, something between the hard-charging muscularity of the Bad Plus and the kaleidoscopic virtuosity of Keith Jarrett’s Standards Trio. “Ode” and “Where Do You Start” are conceptually differentiated — one all original, the other all covers — but the sound is unified. The originals in “Ode” have the nagging familiarity of countermelodies while eluding specific sources. Mehldau’s two-handed attack often sounds like two players alternately colliding and cohering. In “Where Do You Start,” familiar songs are surprisingly and robustly re-imagined. Mehldau was one of the first jazz musicians to mine contemporary sources like Radiohead and Soundgarden. The material here includes songs as varied as Ornette Coleman’s “Lonely Woman,” Elvis Costello’s “Baby Plays Around” and a tumultuous gospel-tinged take on Jimi Hendrix’s “Hey Joe.” This is virtuosic improvised music with the engaging edginess of alternative rock. — Peter McElhinney

Somewhere around 1993’s “Where You Been,” Dinosaur Jr. frontman J. Mascis started delivering more polished rock with a lot of major chord progressions. The results were more radio-friendly, though still preoccupied with sheer volume: Mascis once told me that he plays so loud because he started as a drummer and still prefers to “feel the music.” But the wizard-looking singer with the stone-ground vocal croak was always best at bittersweet melodies that found cathartic relief in his emotive guitar solos. On the 10th album from the reunited original lineup, the mixed results are entirely familiar. The tightly wound first single, “Watch the Corners,” and its catchy follow-up, “Almost Fare” — unusual for its bouncy, laid-back groove — show the band can still get heads nodding. A couple of upbeat tracks sung by bassist Lou Barlow provide a needed respite from Mascis’ slacker drawl and heavy, ’70s-influenced rock. Other songs can feel too much like dressing for Mascis to rip another furious, distortion-drenched solo. Not necessarily a bad thing, but too predictable to call a true comeback. — Brent Baldwin

Dinosaur Jr. performs at the Jefferson in Charlottesville on Oct. 26. 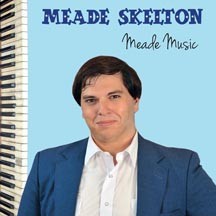 I’m not sure how I missed Richmond’s own “piano playin’ cowboy.” But after reading about Meade Skelton on the Music for Maniacs blog, I was intrigued by this Southern Baptist “outsider musician” known for Internet self-promotion and writing country-and-western songs about his struggles with weight and distaste for hipsters. The music has a golden ’70s AM sheen to it, not unlike a number of vintage, little-known country albums that hipster labels have been reissuing lately.

His latest, “Meade Music,” is a good introduction. It’s a greatest hits of sorts (his most requested songs) delivered in smooth, country-politan fashion by the solid Meadow Street Band, which lies back in Skelton’s gently rollicking piano groove. His expressive tenor vocals are heartfelt and occasionally recall a poor man’s Gram Parsons — even when he overreaches, you can forgive him. He writes about what he knows: mostly honest and simple odes to Southern life about sweet tea, riding horses and taking life slowly. The ballads are enjoyable for their purity of vision and infectious enthusiasm — there’s even a little doo-wop — no hipster irony here. Just Skelton’s nostalgic porch-swing world, a happy place where the Krispy Kreme light stays on, “Mama’s Family” episodes still top the Nielsen ratings, and neck-fat men in seersucker suits nod to “a simpler place and time, back in the Old South,” as Skelton sings. Vocalist Kathy McGraw adds, “Well, shut my mouth, honey child.” — Brent Baldwin

Much of what fills today’s R&B wouldn’t have fit the description a decade ago. It’s now dance music and owes more to pop sensibilities. The shift has pushed the music Jarrard Anthony makes to the musical outskirts, but his new CD, “Ready to Live,” is largely worth the trip.

On “Never See Her Again,” Anthony sings about a love that lasts through several lifetimes, over a track that recalls R&B duo Foreign Exchange and Brit soul outfit 4hero. Anthony’s love of ’90s hip-hop is also evident, as that song, which features a musical hook popularized by Gang Starr’s “Mass Appeal,” segues into a vocal intro used by Main Source on “Fakin’ the Funk.” Other highlights include a potent and reverential remake of Weldon Irvine’s “I Love You,” and the simply beautiful “All Around the World,” produced by Nate Smith, who’s responsible for most of the sounds on “Ready to Live.” The album includes guest appearances from fellow do-it-yourself soul man Eric Roberson, jazz legend and local hero Lonnie Liston Smith and several other singers (mostly comparable) and rappers (largely expendable). Anthony may never make music like hit singers Chris Brown or Trey Songz, but he’s staked out his own lane. — Craig Belcher

Correction: The location of Jarrard Anthony's Soul Social has been corrected: It takes place at Addis Ethiopian restaurant, not the Nile.