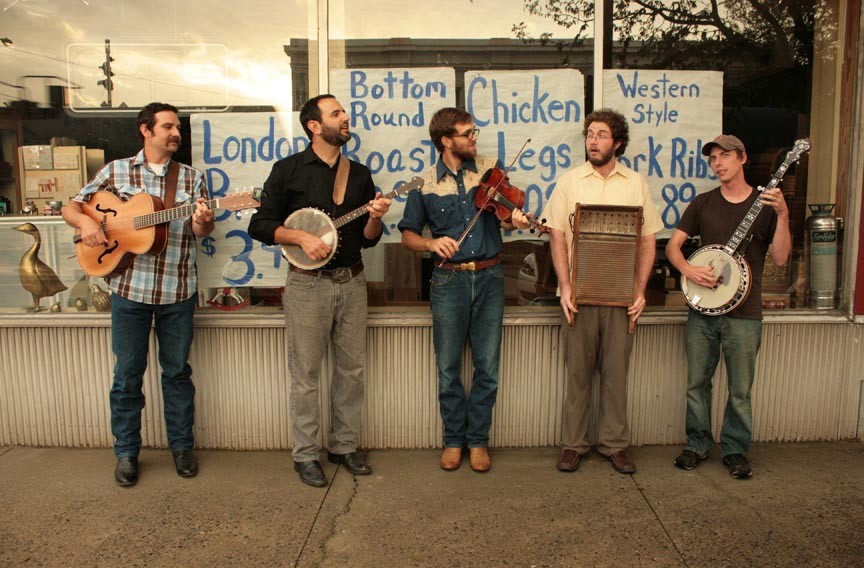 Richmond's Hot Seats definitely are feeling it on their ninth release. The five-piece acoustic band is known for juggling traditional bluegrass, old-time jug music, '20s ragtime melodies and classic honky-tonk. Here the players sound finely tuned to each other, blurring the lines between hillbilly and early jazz and having a good ol' time doing it. The six originals are credited to lead vocalist and multi-instrumentalist Josh Bearman, a Style Weekly contributor, and the songs often feature both old-time claw hammer and three-finger-style banjos played simultaneously. "We're not afraid," Bearman says.

Kicking off with a lyrical nod to Richmond in the opening bluegrass chug of "No Plans," the album moves at a brisk clip. "Too Much Fun" seems like a nod to the Casey Anthony murder mystery ("you ran around / now your baby's in the ground"). The tear-in-your-beer country of "Damaged Goods" chronicles the perils of dating in your 30s from a jaded but honest narrator. And the vaudevillelike "Peaches," which recounts a hairy night at Atlanta's oldest strip club, bends tongue-in-cheek sexual innuendo around adventurous time changes. From clever, topical songwriting to instrumental skill and gritty old-time fiddle covers, "Feel" is a lively studio album with a wide-open sense of the possibilities stemming from traditional music. Fans have more reason to celebrate: The band also has an EP out, appropriately titled "Leftovers," which features songs that didn't fit the album but "were too good to pass on," Bearman says.

The Hot Seats perform at Shady Grove Coffeehouse in Glen Allen on Sept. 8 at 8 p.m.

For years, Bermuda Triangles has been one of the more adventurous and uncompromising live bands I've seen around Richmond. Last I caught it, the band was a frenetic duo, playing jerky, start-stop rhythms with punk zeal. They've since mutated into a trippy, four-man cult and added layers of synthesizer blasts, saxophone, bells and free-flowing percussion to the strident vocals, which feature Jason Hodges' maniacally high, drill-worthy shouts and eerie group chanting. This new cassette, recorded in 2011, contains seven noisy tunes bonded by a kind of cumulative percussive tumult, with all members swarming around the relentless hive rhythm. Somehow these guys make interplanetary industrial noise and repetitive shouting sound almost meditative at times — like a post-punk drum circle manned by primal-scream enthusiasts. A standout track, "Spontaneous Human Combustion," starts with Bill Porter's oscillating, seasick synth swells before building quickly into a post-apocalyptic vision of a real-life Burning Man, with minor echoes of past Richmond greats Rah Bras. The Triangles have aptly described their sound as "tribal ritualism dipped in kraut-inspired psychadelia [sic]." I might add no-wave, gamelan-nightmare rock to the mix. If you can handle the sustained intensity and abrasiveness of the vocals, there are experimental song structures and textures here conceived with fresh ears and played with heartfelt abandon.

Love Canon doesn't cover the music of the '80s as much as kidnap it and take it on a bluegrass-tinged joyride. It's a general rule of American culture that it takes 20-40 years for a decade to shed its stale stench and get its groove back. There's no shortage of clever musical re-enactors giving the first generation of MTV an ironic makeover: a fool's errand, given that the music already was soaked in postmodern irony. By contrast, Love Canon refreshes and extends the originals with affectionate humor and effortless virtuosity. The players — including Old School Freight Train's Jesse Harper and Nate Leath and Virginia Commonwealth University guitar and banjo master Adam Larrabee — add layers of depth to the still-appealing pop hooks. They romp on throwaway classics such as ZZ Top's "Legs" and "She Blinded Me With Science." On their excellent version of "The Boys of Summer," the folk instrumentation adds a traditional context to the time-capsule lyrics. After blazing through other up-tempo material, they shift to a slow burn on the closing "Girls Just Want to Have Fun." It's an unlikely choice for an all-male band, but they strip the song down to its bittersweet, feminist heart.

For the longest time, it was difficult to listen to the Trillions' debut disc because I couldn't get past the first track, "The Experts." After a loud blast of feedback, the tune kicks in with a martial drum stomp, an instantly implanted melody and a brilliant run of scratchy guitar licks that arrest the ears until a double-time freakout chases the fade. It's one of those songs you simply must play again and again. But get past this obvious hit and you'll find more shimmering thrills from guitarist Charlie Glenn's pen — the catchy fatalism of "When Things Go Wrong," the bouncy "You Gotta Be Kidding Me" and another instant classic, "For the Better," which was a highlight on Style Weekly's 2011 "Sounds of Richmond" compilation. What do the Trillions have that other contemporary power-pop bands can't seem to find? Good songs (for one) — a lot of them. Plus there's nothing overproduced or precious here. Like Big Star, Badfinger, the Kinks and all of the truly great melodic bands of the past, the Trillions seem confident enough in their material that they just play it — enthusiastically, energetically and even, at times, with a bit of inspired sloppiness — and hope you'll sing along. And you will.

Give away: For one lucky Style reader, the Trillions have planted a USB device containing their new CD. It's under the Ninth Street bridge, on the banks of the James River, drummer Joe Ferguson reveals — "accessible by walking the length of Brown's Island, past the stage and down a little hill." Good luck, scavengers.

Jonathan Vassar and the Speckled Bird, "The Sky and Country" (Triple Stamp Records)

Aptly named, the second album for Jonathan Vassar and company is a contemplative handful of songs that take the listener on a pastoral journey and delight the senses. The band's earlier work, including a handful of EPs and its first full-length, "Signs and Wonders," showcased players exploring different sounds and styles, while this album finds them settled into something cohesive and all their own. Well-crafted words embrace nature's intricate details while steady rhythms move around them like swift currents. Combined with dexterous finger picking and the classically trained Antonia Vassar's complementary vocals, it's a beautiful affair. Whether you call it roots music, Americana, or folk, one thing is certain: Jonathan Vassar creates damn fine, timeless music.