A killer vibes album by Patricia Brennan and Béla Tarr's “Sátántangó,” a 7.5 hour masterpiece of slow cinema on Blu-ray. 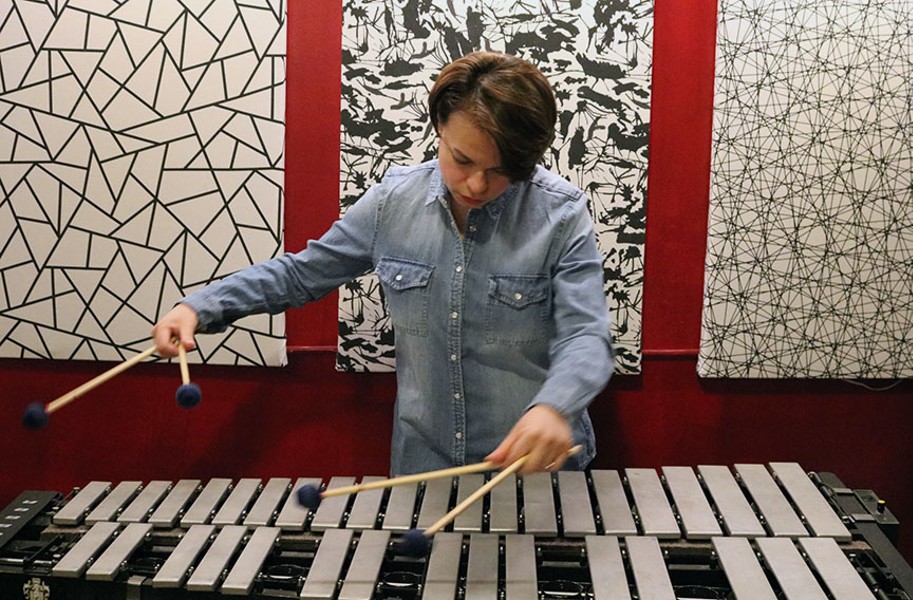 Ah, the soft percussive sound of mallets dancing on the metal bars of a vibraphone or the wooden bars of a marimba. I probably first heard these magical sounds as a child watching “Mister Rogers,” or maybe it was a Christmas song. But I never really heard the instruments played in a challenging, experimental manner. That is until recently, after reading about Patricia Brennan’s new solo double album in the latest edition of Maggot Brain magazine [Shout-out to editor Mike McGonigal, just out of the hospital: Get well, Mike.]

Born in the Port of Veracruz, Mexico, Brennan performs in several big bands and ensembles and has been earning notice in the New York avant-garde music scene since her training in the classical and jazz worlds. Listening to this unaccompanied work, it’s easy to understand why notable musicians like John Zorn seek her out for other projects. Few artists can make an instrument sound new or redefined, and Brennan is one of them. On spellbinding tracks like “Solar,” “Magic Square” and “Derrumbe de Turquesas,” she uses the mallets and effects such as an octave-adjusting guitar pedal to expand her possibilities, never relying on traditional anchors such as melody to guide these wide-ranging, improvisational explorations. Some tracks were written on piano and adapted for vibraphone, creating a challenge for the artist from the get-go. It all makes for an unpredictable album that envelops the listener with mesmerizing tones that can be mysterious, relaxing, sleek, spooky and full of interstellar wonder. In a way, her wide-open approach mirrors a welcome trend in the pop music world: the blurring or negation of genre labels. Lately, I'm trying to only buy records that sound different from anything else I own, and Brennan’s freeing musical expression fits the bill. Check her out on bandcamp.

It seems only fitting that Hungarian filmmaker Béla Tarr’s 1994 masterpiece, a gorgeously shot, black-and-white art house film with a 7.5 hour running time, is finding new life during a global pandemic. A gloomy, rain-and-wind battered epic about a farm collective in a Hungarian village just before the fall of communism, “Sátántangó” is a crowning achievement of slow cinema, newly available when the entire world has slowed down for the first time in a century.

Restored in 4K from the original 35mm negative, the new Blu-ray version was released a few months ago in conjunction with the film’s 25th anniversary. Composed of roughly 150 long takes, the movie follows the affairs, financial schemes and drunken arguing of poor villagers transitioning from one exploitative, bureaucratic system (communism) to a more autocratic, Western-style exploitation (crony capitalism) embodied by a young con man, Mihály Víg, who appears and offers help.

Slow cinema's aesthetic is built on reinforcing a dissonance between the narrative and time. It accomplishes this through formal elements such as wide angles, static frames, minimal coverage, heightened sound effects and visual flatness, all of which perfectly underscore Tarr’s themes regarding the alienating effects of Stalinism on community, as well as mankind's ravaging of nature and growing separation from it. The memorable opening scene finds the camera lingering for nearly 9 minutes on a herd of cows roaming through the dilapidated village -- which somehow manages to play like a mesmerizing allegory, as do many of the longer scenes.

Tarr clearly was influenced by the great Russian director Andrei Tarkovsky and the oppressive mood also feels indebted to the works of Franz Kafka and Samuel Beckett, both writers influenced the original 1980s book by Hungarian author László Krasznahorkai. In the new intro to filmmaker Paul Schrader’s “Transcendental Style in Film,” Tarr is quoted as saying: “I despise stories. They mislead people into believing something has happened. In fact, nothing really happens as we flee one condition to another. All that remains is time. This is probably the only thing that’s still genuine – time itself; the years, days, hours, minutes and seconds.”

Unsurprisingly there is a bleakness, some might argue a nihilistic world view, that may repel viewers from sticking it out. The film's creators weren't concerned with selling tickets (you’d need a sleeping bag to see it in the theater). Tarr's quotation aside, there is storytelling, tragic humor and an experimental narrative with events seen from different points of view, within the 450 minutes. But what really sets the film apart is the beautifully dark photography by Gabor Medvigy and the brilliantly choreographed long takes. The latter allows a viewer to become a more active, thinking participant by focusing attention and imagination like a lens throughout the film's 12 distinct movements that mirror the tango, six steps forward, six steps back. Rarely has a cinematic walk in a driving rainstorm, or a child singing quietly to herself in a barn, been captured so memorably on film.

Some critics have remarked that the imagery feels like a series of paintings. I was more often reminded of poetry, like T.S. Elliott’s “The Love Song of J. Alfred Prufrock." The villagers are always scuttling and scurrying against the ever-present wind and mud, while indoors, you can almost taste the yellow smoke’s muzzle on the windowpanes. In one dimly-lit bar scene, the editing rhythm creates a hypnotic pull as a close-up tracking shot follows drunken faces while a man repeatedly exclaims: “My father’s the sea/my mother’s the earth … tango!” Essayist Susan Sontag once described the grueling film as “devastating, enthralling for every minute. … I’d be glad to see it every year for the rest of my life.” While I won’t go that far with the praise -- parts felt uneven -- I'm glad I watched it and pretty sure I'll revisit certain sections.

This two-disc set, retailing for $39.99, includes extras such as an interview with composer and actor Mihály Víg, whose haunting accordion-and-bells score adds greatly to the film; a video essay “Orders of Time” by Kevin B. Lee; a 2007 interview with Tarr; and an essay booklet on how to watch the film by Janice Lee and Jared Woodland. Having influenced many directors including Gus Van Sant and Richmond’s own Rick Alverson, Tarr has since retired from filmmaking. But if you find this beautiful restoration and new English translation of Tarr's visionary film inspiring, you'll want to watch his final 2011 work, “The Turin Horse,” which involves the story of philosopher Friedrich Nietzsche’s mental breakdown after seeing a horse whipped in the Italian city of Turin.

To purchase “Sátántangó” or stream it, visit arbelosfilms.com.