On "Headlines," a mission-statement track from his second album, "Take Care," Drake dismisses his competition as "soap-opera rappers" who "sound like 'All My Children.'" It's a sharp rebuke of post-Kanye hip-hop, where airing dirty laundry has replaced intricate braggadocio as a lyrical approach, and Drake delivers it with a wink: He's not only the Morrissey of navel-gazing rap, but he even got his start on Canadian teen soap "Degrassi: the Next Generation." His knowing self-denigration makes "Take Care" a conflicted, contradictory break-up album, full of dark ambience, roomy production, and muted beats. Whether he's drunk dialing an ex on "Marvin's Room" or using his celebrity for easy sex on "Crew Love," Drake refuses to play down his own loutishness. But his greatest accomplishment on "Take Care" is crafting a relatable, even sympathetic persona even when he reveals the shameless calculation behind it: "What have I learned since getting richer?/ I learned working with the negatives could make for better pictures."

It's not surprising that film director David Lynch has made a weird album; eerie, dreamlike music and meticulous sound have always been essential to his surreal films. What is surprising is that his solo debut is not half-bad, however drenched in echo, reverb and sonic pastiche. Fourteen original songs sustain the album's spooky tone throughout a cloudy mixture of repetitive blues vamps and electronic disco numbers. Part of Lynch's jarring effect is dragging Americana into his dream-noir underworld, musically he does that on numbers like the title track, with its backwards-recorded guitar and nearly unrecognizable party world of barbecue and beer, and "Football Game," an adulterous blues shuffle that Lynch performs with a voice that sounds choked on cotton balls: "I went down to the football game ... saw you with another man." Most songs feature Lynch half-singing through different vocal effects that only half-mutilate his nasal, 1950s cornball twang. The best tracks take on hypnotic qualities when paired with the man's fragmented, subliminal lyrics, such as the whispered late night trip hop vibe of "Noah's Ark." Yeah Yeah Yeahs' frontwoman Karen O contributes paranoid vocals to the Western-tinged opening track "Pinky's Dream," and one can hear the reverberations of former Lynch collaborators from Angelo Badalamenti ("Twin Peaks") to Sparklehorse and Danger Mouse. But it's the slower, Lynchian blues that stand out, giving fans just what they want to hear.

Since the early 1970s, with improvisations of transfixing beauty, Keith Jarrett redefined solo acoustic free jazz piano. The high point — commercially at least — is the 1975 "Koln Concert [ECM]," a perfect melding of the pianist's mesmeric grooves and grand, dissolving melodic vistas. He is famous for singing along to some lovely invention in a nasal whine, and stopping concerts to berate an audience member for clearing his throat. From an early whirlwind of activity, Jarrett's playing has been concentrated into two basic settings: the Standards Trio, occasional classical outings, and signature solo appearances. Forty years on, the music has evolved. In "Rio" the omnipresent rolling, gospel-tinged vamps are mostly gone. The sections are shorter and the playing, while still lyrical, is spikier. The Ravel impressionism slides into knotty modernism. Jarrett's phenomenal command of his instrument always serves an almost narrative logic. The songs segue from folk-song simplicity to fleet flights of dissonance to extended, border-free virtuosity. It may sound daunting listening, but it's not. We are listening to a phenomenal, free-ranging musical monologue from a master at the top of his game. 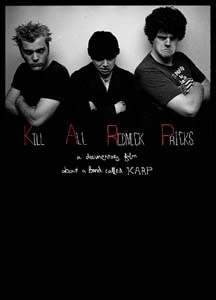 Named after a jokey high school fanzine, Kill All Redneck Pricks, Karp was a rock band in the truest sense of the word. Three lifelong friends from backwater Tumwater, Wash., bonded as outsider geeks at a football-obsessed high school, making triumphantly loud and heavy music a la their early 1990s idols, the Melvins. They earned a reputation for powerful live shows and their third, self-titled album on K Records showed great promise. Of course, that's when things fell apart. Guitarist Chris Smith got hooked on heroin, after attempting to hang himself, and the band quickly dissolved at the peak of its powers. But the tragedy wasn't over: Just when it seemed bassist Jared Warren and drummer Scott Jernigan had rediscovered their passion with a new band, Jernigan was killed in a freak boating accident on Lake Washington. Director Bill Badgley does a solid, no-frills job with the brief history of the group, offering a snapshot of the post-grunge Pacific Northwest while keeping the story focused on its human center — three funny guys who lost their way but remained friends. By the end you're almost cheering for the likeable Warren, who through sheer perseverance and a level head, winds up joining his heroes, the Melvins, creating the greatest white-fro combo in rock. This documentary plays like a hard-rock parable for high school dropouts. — Brent Baldwin

"Kill All Redneck Pricks" is available on DVD from karplives.com.

Susan Greenbaum is the quintessential Virginia singer and songwriter. She's played every local venue imaginable and garnered an impressive following both inside and out of the Commonwealth. It's been nine years since Greenbaum released an album and this time out, the diminutive powerhouse walks the line between seasoned folkie and feisty blues woman, a la Bonnie Raitt, on 14 solid songs. Recorded in Nashville, Greenbaum's fifth disc twangs and kicks, marking new sonic territory for the singer and her sturdy band. Full-bodied vocals shine on the heart-tugging "Virginia, the Home of My Heart" and delightful morbidity prevails on "The Squirrel Song," a plucked rambler about an ill-fated rodent. — Hilary Langford