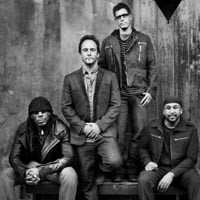 Dave Matthews Band, “Big Whiskey & The GrooGrux King” (RCA)
There's a weight to the band's seventh disc that reflects both the sultry, New Orleans environment in which it was recorded and the profound loss of saxophonist LeRoi Moore last year. But there's no shortage of celebratory vibes and carpe diem sentiments. The band adheres less to the pop structure heard on its last few releases and returns to a jam base of freewheeling rhythms, shimmering brass blares and tangled percussion. Matthews for the most part abandons his usual acoustic strums, digging into an electric sound while wailing alongside longtime collaborator Tim Reynolds, and oscillates from comical to introspective in his words and delivery. Ultimately it feels like a cathartic release and a sure sign that little can stand in the way of Charlottesville's finest when it comes to making meaningful music. HHHHI — Hilary Langford

Neil Young, “Archives Vol.1 (1963-1972)” (Reprise/Warner)
After years of rumors and false starts, Neil Young has finally unleashed his ultrahyped, archival boxed set on the public. It comes in several different packages for today's flailing economy: a footlocker-sized $250, 10-disc Blu Ray set; a roughly $200 DVD box set; or for mere mortals, the roughly $85 eight-CD set. The last is the one I heard, and it most notably features repeats of the previously released Massey Hall 1971 and Fillmore East 1970 shows and does not include the DVD of his disjointed film, “Journey Through the Past.” That's no big loss.

There are more than 40 unreleased songs, different versions and mixes — and some are wonderful upgrades. The first disc includes early-'60s surf-rock instrumentals by the Squires illustrating the genesis of Young's wiry, barely controlled lead guitar style — but unfortunately does not include any rare singles from the Mynah Byrds, featuring vocalist Rick James. Other disc highlights include an intimate Riverboat (Toronto) show from 1969; a beautiful, early full-band version of “Birds”; the mournful country rocker “Bad Fog of Loneliness” performed with the Stray Gators; and an unreleased mono track from Buffalo Springfield, “Sell Out,” a Dylanesque rocker that shows surprising bite after all these years with references to “misled skinheads.”

If you're a Young fan, this is tough to turn down for sheer breadth and detail. The sound quality alone is startling; you can almost feel the contours of the rooms the stuff was recorded in as once-hidden sounds pop from the background. I can't attest to the Blu Ray stuff but the super-high-definition CDs come closer to the warmth of vinyl than anything I've heard. With box sets of this magnitude, it really does come down to reassessing your collection. For those fans taking a chance on this, I don't think you'll be disappointed. Sell your unessential Young albums and pick this up as a complete, artist-in-a-box collection. It easily features his most defining material. HHHHI — Brent Baldwin

DVD: Berlin Philharmonic/Claudio Abbado “Beethoven: Symphonies Nos. 1-9”  (EuroArts, four DVDs)
The audio version of this cycle of the nine Beethoven symphonies by the Berlin Philharmonic and its then-chief conductor, Claudio Abbado, recorded in 2000 and 2001 and released last year by Deutsche Grammophon, sells for about $40. This video set of the same performances goes for about $30. In fact, it's cheaper than most other digitally recorded Beethoven cycles. Given those artists and that price, I might cut to the chase and simply ask, “Visa or MasterCard?” — except for a few issues that might affect your viewing and listening experience.

Watching an orchestra perform, even with close-ups and frequent changes of perspective, is not scintillating television. So directors focus for much of the time on the conductor. Abbado made these recordings in the early stages of an ultimately successful battle with stomach cancer. His stamina is heroic, and his musicality unaffected by his health; but he looks frail and ghostly. This being Beethoven, the ghost is fairly agitated. This is, to put it mildly, an unusual look to go with the robustly physical sound of Beethoven played by the world's highest-powered orchestra.

Should cognitive dissonance strike too hard, the solution is simple: Listen to it without looking at it.

Abbado's interpretive view of the Beethoven symphonies is classical. His tempos are quicker, his accents sharper, his musical textures more transparent than those of conductors who treat Beethoven more romantically (Leonard Bernstein, say, or Daniel Barenboim). Some might hear a brusque or brittle quality in Abbado's pacing and voicing of the more triumphal bits of the “Eroica” Symphony (No. 3) or the “Ode to Joy” of the Ninth Symphony. The orchestra plays as splendidly as one expects of the Berlin Philharmonic.

An extra attraction for Richmonders: Thomas Moser, a Richmond native and alumnus of what's now Virginia Commonwealth University, is the tenor soloist in the Ninth Symphony. Moser has spent most of his career in Austria and Germany and has made a specialty of German-language opera and concert music. This performance finds him in prime voice. HHHHI — Clarke Bustard

Jason Arce, “Simplicity” (Self-released)
Now that 2007 Virginia Commonwealth University grad Jason Arce is ensconced in a master's degree program at New York University, “Simplicity” is a look back at what the area has, at least for the time being, lost.

Recorded with a live vibe at Lance Koehler's Minimum Wage Studio, the CD features saxophonist Arce's compositions. There's a slight disconnect between the tight focus of his composition and playing and the occasionally tentative execution of the band — a rubbery sense of time and intonation in the unison sections, especially in the early cuts.

In addition to Arce, the CD features guitarist Alan Parker, bassist Matt Hall, drummer Kelly Strawbridge, pianist Devonne Harris (who plays drums on the songs without keyboards), trumpeter Bob Miller and trombonist Sam Savage. Whether intentional or not, the playing seems to gain assurance as the CD progresses, and everybody on the CD gets a chance to shine. Especially Arce, who swings for the fences and usually connects; his dueling duet with Parker on “New Relationship” is adventurous fun. All in all, a promising debut.  HHHII — Peter McElhinney