Charlotte Gainsbourg, “IRM” (Because/Elektra)
Although she's best known as an actress in films such as “The Science of Sleep” and “Antichrist,” Charlotte Gainsbourg was a musician first, appearing on some of her father's recordings and making her solo debut in 1986 at 13. Her latest, “IRM,” is only her second album in five years, and perhaps fittingly it presents her as an elusive, mysterious presence. Her vocals are thin, whispery and gorgeously detached, her phrasing precise and conspiratorial, but she occasionally gets lost in Beck's ornate production, which bridges the gap between father Serge Gainsbourg's “L'Histoire de Melody Nelson” and Beck's own “Sea Change.” The strings on “Le Chat du CafAc des Artistes” and “Vanities” sound self-consciously melodramatic, while “Heaven Can Wait” slows down the mod pop of Beck's recent “Modern Guilt.” She fares best on English-language songs such as the title track and the T.Rexy “Dandelion,” which sound fittingly adventurous and fully realized. “IRM” sounds compelling in its cold and glittery, ornate production but suffers from too little Charlotte. HHHII — Stephen M. Deusner 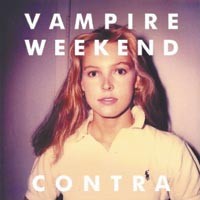 Vampire Weekend, “Contra” (XL)
These Ivy-League indies are synonymous with Afro-pop a la Paul Simon, but their sophomore effort finds them wandering away from “Graceland” long enough to tinker with AutoTune, drop elastic digi-beats, and most importantly, escape being predictable. When they leverage a familiar worldly sound, it's distorted and refreshingly experimental. Think something along the lines of Passion Pit meets the Clash circa “Combat Rock.” Springy “A-Punk” ska shows up here and there, but it too gets a new twist. Surprisingly there's a noticeable lack of any real guitar-driven rock, a direction many thought the band might take, and fewer highfalutin lyrics. While not entirely revamped, the whitest, preppiest band in America has certainly grown up. Members show here that they're capable of delivering something other than what we might expect.  HHHII — Hilary Langford

Magnetic Fields, “Realism” (Nonesuch)
Stephin Merritt is a uniquely gifted wordsmith; no one's going to question that.  His lyrics are clever, unexpected and often hilariously irreverent. When Merritt's at his best as a tunemaker, he remembers to endow his brilliant lyrics with a nice melody, or a catchy refrain, to create a fully satisfying song — it's nice when you can hum along even while you're shaking your head at his offbeat lyrics. While Merritt's over-the-top deep singing voice works perfectly on some of his songs, it's often just on the wrong side of being a novel instrument, so that after a while listening to him sing can get to be like hearing a joke you've been told too many times. The Magnetic Fields' strongest material is often the tracks on which Merritt steps away from the mic and lets someone else belt out his crafty lyrics. When Shirley Simms uses her rich, playful voice to sing “Sweet Loving Man” on the band's magnum opus, “69 Love Songs,” or when she did it on “Drive on Driver” from 2008's stellar “Distortion,” that's when this band is at its sharpest. “Realism” is sorely lacking in all the things that make the group's material work best. It's just a bunch of flat songs that happen to have some funny lyrics. HHIII — Brian Greene

DVD: “Copyright Criminals” A documentary by Benjamin Franzen and Kembrew McLeod (IndiePix)
Can you own a sound? Is the history of art simply the history of insightful appropriation? Look at authors such as Shakespeare, T. S. Eliot and Andy Warhol. These are fundamental questions explored in this absorbing documentary about music sampling from director Ben Franzen and Virginia Beach native (and University of Iowa professor) Kembrew McLeod, whom some may remember from his high-profile media pranks at James Madison University in the early '90s (like changing the Dukes' dog mascot to a three-eyed pig with antlers).

McLeod's pranks have gotten better since then, such as trademarking the phrase Freedom of Expression and immediately suing AT&T, selling his soul in an empty jar for a large sum on eBay, and heckling Bill Clinton while dressed as a robot.

Using split screens to illuminate the structure of samples and numerous interviews with such wide-ranging music legends as George Clinton, De La Soul, Chuck D. and Hank Shocklee of Public Enemy, the filmmakers examine sampling from its artistic beginnings to its quickly mounting legal woes.

The brisk film does a good job outlining both the legal and emotional sides of the issue. Rock producer Steve Albini voices one traditional argument against sampling when he fumes, “As a creative tool, I think it's a lazy artistic choice; it's much easier to take something already awesome and play it again with your name on it.”

Then there are the musings of “the world's most sampled drummer,” Clyde Stubblefield of James Brown fame, who says he was never paid royalties for his sampled beats in countless rap songs. He does kindly deliver the funniest line, noting that no rappers ever gave him any credit or thanks: “The only one I ever got a thanks from was [pauses to think] … Melissa Etheridge.”

Ironies abound here, but the bottom line is that if art has commercial potential, lawyers come calling. Of course, some Beatles and EMI shut down Dangermouse's underground 2004 “Grey Album,” which mashed up “The White Album” with rapper Jay Z's “Black Album” — even though the Beatles' “Revolution 9” from the same album is itself built with stock studio samples. As University of Virginia professor and media critic Siva Vaidhyanathan notes, neither side made money on what could've been a big seller that year, underscoring the need for more rational laws regarding sampling.

Watching the list of classic hip-hop albums built heavily from samples — albums that no longer could exist today because of legal costs — it's easy to reflect on a more creative and fertile period and wonder what could've been. The solutions are complicated and the filmmakers don't profess to know all the answers. But it's today's mass consumers who are using new technologies to become producers of the next level. If the past is any indication, it may well be the poor kid playing a bucket on the street, or a junked computer, who makes the breakthrough. Necessity is the mother of invention, to quote a phrase.  HHHHI — Brent Baldwin