M.I.A., “///Y/” (Interscope)
Does M.I.A.'s third album represent a musical actualization of her radical politics, trading her bracing and populist dance punk for abrasively post-apocalyptic, jump-rope rhymes? Or does success clash so violently with her worldview that she feels compelled to sabotage her career? Either way, it's a mess. From lame title to murky production to naA_ve proclamations to almost proudly missed opportunities, “///Y/” (see?) sounds like it was crafted to upset listeners, not rouse them. Rather than prove she has heart, “It Takes a Muscle” shows M.I.A. can get saccharine with the best of them, and “Teqkilla” pretends its jarring juxtapositions make some kind of a point. She sounds like a robot set to self-righteous, but as the album progresses, she shows a bit of humanity on the vulnerable “It Iz What It Iz” and “Tell Me Why.” But it's far too late to salvage all the backslashes. This album is more interesting than good, more analyzable than listenable. — Stephen M. Deusner 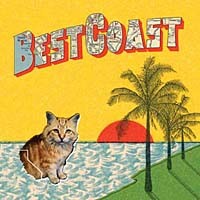 Best Coast, “Crazy For You” (Mexican Summer)
Count me as one of those Best Coast followers — tantalized by months of singles, EPs and Internet mp3 postings — who's been waiting impatiently for the L.A.-based duo to release a proper debut disc. Who cares if the resulting “Crazy For You” clocks in at just over 30 minutes and hides its best song, the irrepressible “When I'm With You,” as a bonus track. This is still one of the best discs of the summer; filled with shimmering echoes of influences as varied as Neko Case, Nirvana, the Beach Boys and the Go-Gos. Here, co-Coasters Bethany Cosentino and Bobb Bruno conjure up a playful, melodic blend of pop rock that's punctuated by slacker whimsy (“I Wish My Cat Could Talk”), romantic yearning (“Boyfriend”) and mature heartbreak (“Our Deal”). Producer Lewis Pesacov manages to brighten up the slightly messy Best Coast sound without watering it down. Because there wouldn't be much point to prettying up evocative tunes such as “I Want to Hate You But Then I Kiss You, I Want to Kill You But Then I Miss You.” Ramshackle quality is part of the charm.
— Don Harrison

Robert Pollard, “Moses on a Snail” (Guided by Voices, Inc.)
Whether fronting indie rock living legends Guided by Voices or recording under his own name, Robert Pollard has always released an amazing (some might say alarming) amount of product. The press sheet for “Moses on a Snail” reports that it's the 10th full-length album Pollard has let out onto the world since 2008, and that he wrote 10 of its 12 songs in one sitting. You have to marvel at the sheer number of tunes he's been able to turn out, but you also have to wonder how much quality would be gained if he were to slow down a little and edit more. Pollard's one of the most inventive pop songwriters living today, and in his best moments he makes his sound-alike peers look like amateur-hour wannabees. But GBV's and Pollard's own releases, while containing at least a couple of jaw-dropping power pop classics, are always maligned by an enormous percentage of filler material. None of the 12 tracks is anything that makes you wince, but apart from some effective guitar work on “Arrows and Balloons” and “Ice Cold War,” there's nothing that makes you feel like you need to listen to the album more than a couple of times. — Brian Greene

Mi Ami,  “Steal Your Face” (Thrill Jockey)
That dub and punk are ready bedmates is nothing new; in Britain, where musical movements are born, immediately laminated and subsequently scorned, they've had an annual dub-punk convention in Brixton that just passed its 30th year. So if I tell you that Mi Ami plays a style of dub-y punk, chances are you'll be less surprised than angry that I'm not reviewing your own homemade post-punk extravaganza. Mi Ami manages to inject fresh tension into the juxtaposition of feedback with echo by adding, well, more tension. Instead of emphasizing the slow bass throb of dub, Mi Ami piles on charging polyrhythms with a heaping dose of high-end, the most important component of which is vocalist Daniel Martin-McCormick's desperate helium yelp. His voice requires a huge suspension of disbelief but the payoff is worth it. “Latin Lover” is a great introduction, as he quotes directly from Whitney Houston's “I Wanna Dance With Somebody” over a strangled rising guitar chug that breaks out before the end of the song into a duet between cowbell and a renegade Space Invaders machine. You know: party music. — D.R. Tyler Magill

Rex Richardson, “Magnum Opus” (Summit)
The two concertos and the duet that comprise the very aptly named “Magnum Opus” are a proving ground for one of the world's most engaging and astonishingly versatile modern trumpeters. Rex Richardson's facility in modern classical and jazz contexts is on full display, as is his command of his instruments: trumpet, fluegelhorn, slide and piccolo trumpet all make an appearance. The first selection, by Dana Wilson, is perhaps the most technically challenging, starting with a passage from Stravinsky's “Rite of Spring” and then sweeping into the wide-screen cinematic territory of a Bernard Hermann score. Richardson's clear-toned, high-wire precision, dancing above the shift and swelling of strings, is a marvel, as is the jewel-like duet with Virginia Commonwealth University piano professor Dmitri Shteinberg, which serves as an effective entr'acte palette cleanser.

The second half of the record — the Intercontinental Concerto for Trumpet and Jazz Orchestra — is huge, brilliant and crazily unpredictable, a cross-cultural roller-coaster ride dizzyingly full of ideas. Composed by VCU Jazz Program founder Doug Richards and performed by an array of area and nationally known musicians (recorded over a couple of months at Shockoe Bottom's In Your Ear Studio), it flows from rollicking African highlife to exotic Asian sonorities to Bach to “Waltzing Matilda” to the blues and samba. All showcase Richardson's chameleon versatility. While Richardson is the central attraction, other players share the spotlight with richly realized solos. At the end, the trumpeter and orchestra rerun the musical journey with breakneck concision, then Richardson alone breaks into a solo cadenza full of heart, humor and impeccable technique. Richards says that while there might be a few trumpeters who could play various sections of the piece, Richardson's the only player with the range to pull off the whole. To be fair, there's no one else who writes big-band music like Richards either. Both are unique, both have international reputations, and it's amazing that they're both here in Richmond. — Peter McElhinney