Reviews of CDs by Brad Paisley, Hoots and Hellmouth, Scott Brookman and Brainworms. 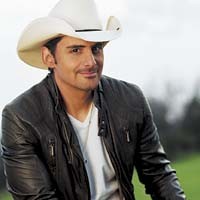 Brad Paisley, “American Saturday Night” (Arista Nashville)
A gifted guitar player and a capable country singer, Brad Paisley comes across as such a likable guy it's easy to miss how subversive his songs can be. His seventh album takes a stab at topicality, starting with a title track about all the international elements that make up an American Saturday night: Mexican beer, Italian ice and French kisses. It's a smart song with a catchy chorus and concrete details concealing what might be a pro-immigration message. “Welcome to the Future” is less subtle. After rambling about high-tech video conferencing and minivans with DVD players, Paisley laments that our racial and social attitudes are still outdated. It veers toward hokum, but his regular-dude delivery sells the sentiments, however sappy. Oddly, he fares less well on more conventional numbers such as “Then” and “Oh Yeah, You're Gone,” but comes across as a genial good guy on “Catch All the Fish” and the should-be-a-hit “The Pants.” Paisley may be a hat act, but he's a thoroughly modern guy. HHHII — Stephen M. Deusner

Hoots and Hellmouth, “The Holy Open Secret” (MAD Dragon)
One of the most interesting and innovative string bands around, Philly-based Hoots and Hellmouth reveal a strong urge to tinker with tradition on their second full-length, “The Holy Open Secret.” It builds on the intricate arrangements and straightforward spiritedness of the group's self-titled debut. These songs capture only a fraction of the band's live energy but still offer a study in gospel intensity, folksy ambience, punk immediacy and melodic range. Sean Hoots wails conspiratorially on the opener, “Root of the Industry,” and “Known for Possession,” both of which would make Woody Guthrie proud, and Andrew Gray slows things down for quieter numbers such as the mercurial “Three Penny Charm” (with interstitials inspired by Phil Spector) and the aching “Ne'er Do Well.” Closer “Roll, Brandywine, Roll” ripples pastorally while the band quietly laments the ruination of everyday natural wonders. The band may look to the past for musical cues, but Hoots and Hellmouth remain compellingly grounded in the present, finding inspiration in small moments and large injustices. HHHHI — S.D.

Scott Brookman “A Song For Me, A Song For You” (self-released)
Much of the FM pop of the '70s reflected a laid-back sensibility through sunny melodic hooks and tastefully clean production. Virginia musician Scott Brookman has been crafting tuneful pop since the '80s, first with the Apes of Wrath and then joining the four-track home-taping club. This exuberantly felt album, released for digital download in 2007 on Lost Cat Records but only more recently available on CD, sounds like a well-studied tribute to the jazz-inflected pop of '70s artists such as Todd Rundgren and Donald Fagen, with the prerequisite underpinning of Brian Wilson and Beatles melodies. A talented arranger and smooth — if not flashy — singer, Brookman freely mixes it up musically, incorporating elements of bossa nova, jazz and rock on these 14 tracks. Winsome, piano-led sing-a-longs such as “Getting Involved with Me” sound like lost '70s cuts off lesser-known Beach Boy albums, while “Home School” is clearly a nod to Steely Dan, its eastern flavors commingling with subtle organ grooves and sharp lyrics. Whatever your take on thinking man's yacht rock, Brookman is damn good at capturing its soft-boiled essence while adding his own bells and whistles through modern digital production. HHHII — Brent Baldwin

Brainworms, “Swear To Me” (Rorschach Records)
I'm not much for sci-fi references, but I saw “Star Trek 2: Wrath of Khan” when I was a kid and still remember those fat snails, the Ceti eel from Ceti Alpha V (yeah, I Googled it, so what) that would burrow into your skull through the ear and take control of your brain before slowly driving you insane. Those babies provide a pretty decent analogy for the relentlessly frenetic hardcore of Richmond's Brainworms, whose choppy, angular rhythms and caterwauled vocals are enough to drive you to claw at your dome or robotically assassinate William Shatner if you listen long enough.

Composed of members from Municipal Waste and Tim Barry's backing band (Josh Small plays guitar), among other groups, the Brainworms don't venture too far musically off the beaten path of '80s Dischord and Touch and Go bands, preferring to keep their hardcore melodical sound: not unhinged in the Capt. Beefheart, free-rock sense. Their most unique asset is frontman Greg Butler, who seems to have the David Yow-like capacity of the truly deranged, which he proves by maintaining a manic, undecipherable intensity on every track. This is the kind of band I prefer to hear live rather than in a studio, but the group does a nice job carrying the freak flag of Richmond hardcore across still smoldering, Civil War parking lots. HHHII — B.B.