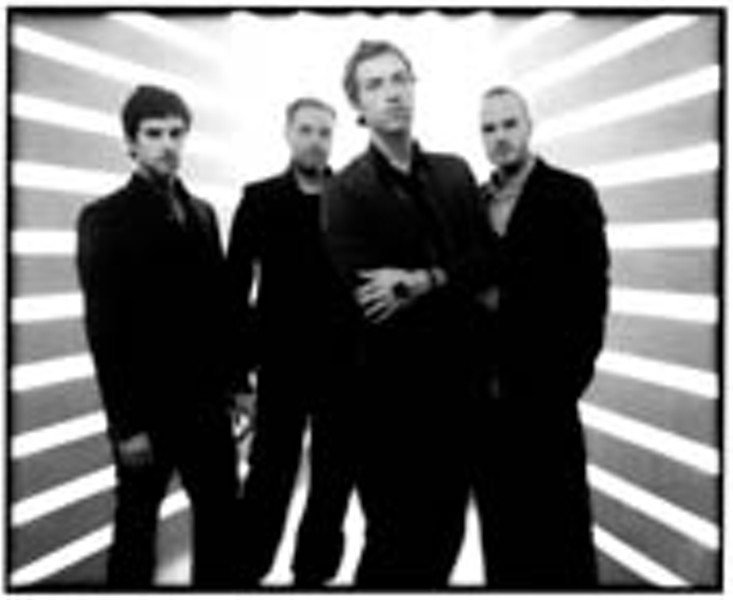 The White Stripes "Get Behind Me Satan" (V2)

After a Grammy-winning turn as producer of Loretta Lynn's newest album and work on "Cold Mountain," Jack White has discovered the Mississippi River, tuning his Detroit-born garage sound to its Southern roots and filling out its traditionally spare tunes with a few new toys.

A marimba in "The Nurse" plonks along sweetly until a heavy drum-and-guitar jag bangs on the melody, Bad Wolf-style, demanding to be let in (a sign from White that the two-piece rawness isn't being abandoned, only modified). But it's the big piano that defines the new sound, softening the jagged edges throughout or leading the way as in "White Moon," a nursery rhyme told by the light of a rented Steinway. White runs from a ghost to a bluegrass beat and laments instinct with buzz-saw blues.

If it seems a bit random, it can be forgiven: White's clearly experimenting, proving he's in it for the long haul. It's not too early to predict how far down that muddy river the Stripes will be in 30 years. **** — Brandon Reynolds

Don't think of this as a remix record. Think of it as a second chance to discover feel-good rapper Lyrics Born. He's even tossed in his first hit, the 1999 single "I Changed My Mind." The James Brown guitar loop and throaty-but-soulful vocals still make breaking up sound like fun.

Most of the !@#$ comes from 2003's "Later That Day," although the revamped tracks are hardly the same. Some feature new dance-oriented beats or scratching, but the standouts feature new verses from guest rappers.

KRS-One takes credit for inspiring the current legion of conscious rappers atop a window-rattling bassline on "Pack Up." Bay Area up-and-comers E-40 and Casual add raucous rhymes to the party anthem "Callin' Out" (the original served as the soundtrack for Adrian Brody's Diet Coke commercial; these guys kept the convertible with hydraulics, but they're not drinking soda).

On the fast and funky "Do That There," Lyrics Born ingeniously re-creates his mile-a-minute flows syllable for syllable with new lyrics. If anything, the remix is better, the quest for rhymes dictating a creatively absurd story.

Lyrics Born (aka Tom Shimura) can be forgiven for not putting together an all-new album; he stays busy running the Quannum label. Still, he's managed four all-new tracks, including an Automator-produced fit of comic braggadocio and two sultry R&B numbers with his wife, diva Joyo Velarde. **** — Nathan Lott

To say that the latest Eels album is melancholy, or to say that singer/songwriter Mark Oliver Everett is depressed, would be true but dismissive. Two discs' worth of music — 33 tracks in all — offer themes of grief, introspection and revelation that snake their way through what is ultimately a very brave album. Listening to it is like finding the diary of a person whose thoughts, while disturbing and beautiful, make you concerned for their emotional well-being.

The beautiful instrumentation of horns, piano and strings create simple background melodies for the darkness of the lyrics and Everett's raspy voice. While the tracks on the first disc have a manic tone of despair, with such lyrics as "nothing hurts like someone who knows everything about you leaving you behind," the second disc is filled with hope and healing. However, a bit of restraint and editing may have helped the album be less cumbersome of a listen and revealed the gems beneath. **** — Shannon O'Neill

Various Artists "You Ain't Talkin' to Me: Charlie Poole and the Roots of Country Music" (Legacy)

Noted producer/author Hank Sapoznik uses two discs to include predecessors and those contemporaries Poole influenced — making a convincing case for Poole as not only the patron saint of country but a central figure in American music history.

A boozy brawler who quickly drank himself to death, Poole had a unique "claw-hammer" playing style (his hand was injured while playing a drunken game of baseball) that was influential, and the wholehearted infusion of his personality into his music was ahead of its time.

From the North Carolina Ramblers, the best of Poole's Virginia String Band "three-fingered" work is included here accompanied by his trebly, nasal vocals. He adapts traditional songs with confidence and skill, tossing out early country hits such as "Don't Let Your Deal Go Down Blues" and performing popular minstrel songs without the stereotypical "blackface" condescension of the period. In terms of its sound quality, Poole's remastered 78s are crisper and more accessible than ever. **** — Brent Baldwin