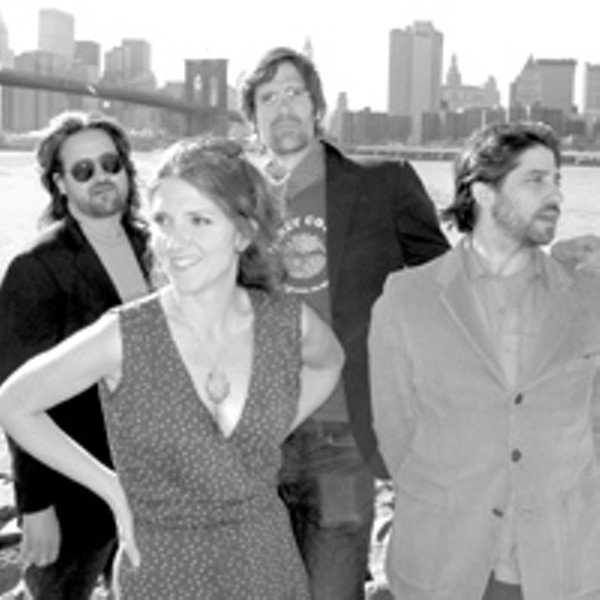 Mostly from last year's U.K. tour, the live numbers showcase a melodic folk band ably re-creating its nuanced studio recordings. Guitar, mandolin and pedal steel outshine piano and violin with greater twang, while the tight-knit arrangements leave little room for improvisation. However, the handful of covers lets Hem timidly step foot into new musical territory. Most notably, the band gives its jangling take on "Radiation Vibe" — not so sticky-sweet as the Fountains of Wayne original — and the R.E.M. classic "South Central Rain," played here with a warm familiarity slightly at odds with the youthful melodrama of the original.

There are strains of soul in Ellyson's airy rendering of "Rainy Night in Georgia," but more often she indulges in honky-tonk drawl. One of few originals, "Oh No," even sees Hem veer briefly from Americana to Southern gothic … la Nick Cave. *** — Nathan Lott

Arctic Monkeys "Whatever People Say I Am, That's What I'm Not" (Domino)

The Arctic Monkeys' story is already legend across the pond. At early live shows, the then-unheard-of band gave demo CDs to tiny crowds. Word spread rapidly via the Internet, the band got a record deal and earlier this year "Whatever People Say I Am" became the fastest-selling debut album in British chart history.

Undeniably derivative of every indie band you care to name, these four teenagers compensate for technical shortcomings with energetic confidence and intelligent lyrics. Lead singer Alex Turner captures scenes from his native Sheffield with wry affection, such as the local prostitute who "don't do major credit cards, I doubt she does receipts," but what he lacks in grammar he makes up in wit.

Backed by lively bass lines and simple yet aggressive guitars, Turner delivers his observations in a rich Yorkshire accent that may be indecipherable to American ears. Pay attention, though, and you'll understand why the British haven't been this excited since someone paired fish with chips. ***** — Daryl Grove

Chan Marshall is a complete Froot Loop. After seven albums, you'd think she would have overcome her debilitating stage fright or lost a slew of fans because of it. Neither is true. Her upcoming tour recently got nixed because of unspecified health reasons, while praise of the new CD has been unanimous. Unfortunately, the same fragility that shapes her delicate songs reduces her, in live performances, to tears.

For this venture, Marshall rounded up impressive studio musicians including Al Green's guitarist Mabon "Teenie" Hodges. The result is a staggeringly beautiful collection of thoughtful, self-penned songs that infuses Southern gothic intrigue with rootsy Memphis soul, a shot of old-school country and a tad of funk. Unpolished vocals … la Beth Orton teeter on reverb twang and sometimes swirl in melancholy, hypnotic choruses. Marshall's demeanor oscillates from pensive schoolgirl on the opening title track to a sauntering Dusty Springfield on "Love and Communication." Aptly named, the disc proves that despite all the drama, this cat has staying power. *** — Hilary Langford

The lisping Deadhead, who is reportedly considering a Senate run in his home state of Minnesota, spends a lot of time lambasting right-wing ideologues from the Bush administration to blustering blowhard Bill O'Reilly. This CD offers a greatest hits of sorts, featuring studio skits and live performances from his savagely humorous show on Air America Radio.

Whether mocking easy targets ("The Bush Twins Enlist") or skewering O'Reilly for claiming to have "seen combat" as a journalist (the hilarious "Bill O' Reilly's Tales of Combat"), Franken's deadpan wit zeroes in with the laserlike precision of a smart bomb — well, maybe that's not a good analogy. Still, the seasoned comedic vet keeps the mood light with sophomoric goofs such as the playful "bleep" button exercise during a library dedication speech by Laura Bush, in which she appears to curse like a sailor while thanking the governor and his wife for years of "f — ing."

I'm hopeful the Counting Crows' Oscar-nominated contribution to "Shrek 2" started a trend: kid movies scored by artists several shades cooler than Phil Collins. But the question remains: Can Johnson, who got his start scoring surf films, entertain parents and children alike? Happily, yes. His lean acoustic rock suits kids, who don't need the (literal) bells and whistles of today's indie rock. These are catchy tunes, peppered with affirming messages for curious youngsters. Johnson's lyrics sometimes overshoot the under-10 audience, but his laid-back aloha vibe has intergenerational appeal. A chorus of youthful voices accompanies the most kid-friendly tunes, "The Sharing Song" and "The 3 R's." The latter is a funky romp that makes recycling fun with a nod to "Schoolhouse Rock" — the childhood pop of 30-something parents. Johnson also sings along with his musical influences G. Love and Ben Harper. Part lullaby, part protest song, Harper's "With My Own Two Hands" is a surprising ode to empowerment worthy of Pete Seeger. **** — N.L.

Goes well with expats, Nashville and the Crying Shames.

Some of the tracks, especially the ones originally performed with The Crying Shames such as "Can't Stop It," "Carry You Home" and the title track, sound overproduced and slightly stale owing to the use of session musicians as opposed to his well-worn previous band. But overall, the new solo album is still fresh-sounding, from the ripping, riff-based "Other Side" and the harder and heavier Von Bondies-esque "Daddy Was a Shriner," with its fuzzy built-up guitars, to the Oasis Brit-pop sounds of "Tell Me Your Story." The album even has the prerequisite balladry of every rock album with "Bounds Green," a softer song akin to Elvis Costello's "(What's So Funny 'Bout) Peace, Love and Understanding." **** — Ira Calos