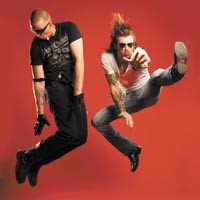 Eagles of Death Metal, “Heart On” (Downtown Records)
You see Poison's human beanbag Bret Michaels on VH1's “Rock of Love,” you see MAtley CrA¬e on tour, you find out your sister is pregnant with Kip Winger's kid and you might just think that glam rock has staged a comeback. But you can't figure out if it's legit love of hair metal or just a kitsch throwback. … like those maroon legwarmers everybody's sporting.

Eagles of Death Metal's third album makes the argument that the popularity of cheesy, oversexed rock is, and has always been, firmly tongue-in-cheek. But it's OK. With the fluty vocals of Josh Homme, frontman for Queens of the Stone Age, cruising through sparkly eyed homage to that town that started it all, Los Angeles, it's definitely a feel-good album. But this one's refined the sound of the first two albums — the mid-'80s time capsule of “Heart On” gleams with the trashy chords of “High Voltage” and “Cheap Thrills,” while “I'm Your Torpedo” is a throbbing arena rock monster and “Wannabe in L.A.” sums up the band's mission. Some tracks — “(I Used to Couldn't Dance) Tight Pants” and “Solo Flights” — miss the mark, but overall the band's dedication to honoring and skewering the great gelled crotches of yesteryear gets stronger with each album. HHHHI — Brandon Reynolds

Hank Williams Sr., “The Unreleased Recordings” (Time Life)
Now this is impressive. Rarely does a release come along that manages to increase a legendary artist's recorded output by nearly 50 percent — all while sounding better than anything before it. Such is the case with this historic, three-CD collection of WSM Nashville morning radio recordings, known as the Mother's Best recordings (after its flour company sponsor), from original country music gangsta, Hank Williams Sr.

Produced at the height of his fame in 1951, these relaxed, full-band recordings aired weekday mornings at 7:15 for 15 minutes — providing the daily soundtrack for farm workers around the country. Williams' backing band, the Drifting Cowboys, is buoyed by the polished steel guitar of Don Helms and the simple but effective walking bass of Big Bill Lister. There is an air of studio playfulness as each song ends with someone shouting hokey exclamations: “Yeah, mayne!” or “Thattaway, Hank.”

But the biggest treat is that these 54 restored songs (the first batch in a series) sound fuller and warmer than other available Hank recordings, revealing subtle nuances in his nasally vocals. The songs also provide an intimate glimpse of his diverse musical influences as wide-ranging as African-American gospel, western swing, bluegrass and traditional Appalachian balladry. It's taken an eight-year legal battle for these recordings to see the light of day, but for anybody interested in real country music, it's worth it. HHHHH — Brent Baldwin

Fall Out Boy, “Folie a Deux” (Island)
Pete Wentz, tabloid smirker and the luckiest bass player alive, may get all the glory for fathering a child named Bronx Mowgli with Ashlee Simpson, but singer Patrick Stump has always been Fall Out Boy's main draw, especially on the band's fifth album, “Folie a Deux.” Despite the convoluted songwriting and predictable hooks, Stump alternately evokes the ire of Johnny Rotten and the schmaltz of Steve Perry — an unlikely combination that lends songs such as “She's My Winona” and “(Coffee's for Closers)” a dynamism the lyrics can't always muster. More adventurous than its peers the Killers, Fall Out Boy tries hard, mish-mashing Springsteen bombast, T. Rex glam stomps, Boston riffs and ELO density without sounding derivative. The album creates a space where guests Elvis Costello and the Neptunes can cohabitate. Unfortunately, the band strives so hard for meaning that its ambitious pop synthesis often sounds leaden instead of fun, highlighting the mistaken assumption that clever song titles and ironic shout-along choruses like, “No one wants to hear you sing about tragedy,” can substitute for actual insight. HHIII — Stephen M. Deusner

Various artists, “Love Train: The Sound of Philadelphia” (Legacy)
By the early 1970s, the Motown sound was fading and a new record label became the sound of young America. Founded by producers Kenneth Gamble and Leon Huff, Philadelphia International Records was the epicenter for soul music, with artists such as the O'Jays, the Jacksons, Lou Rawls, Dusty Springfield, Teddy Pendergrass and Patti Labelle. This box set collects most of the hits and a few lesser-known tracks (71 songs total) on four discs.

These songs are more than hits — they're national treasures. How can you “Kiss and Say Goodbye” without the Manhattans? Is it possible not to “Enjoy Yourself” when you hear the Jacksons sing in their prime? Wouldn't the last presidential campaign have been less thematic without “Ain't No Stoppin' Us Now” by McFadden and Whitehead?

There is nary a bad tune in this collection of songs about hope, faith, love and determination. It's priced at about $39, so don't let “The Love of Money” keep you from doing right by folks on your shopping list. “Give the People What They Want.” HHHHH  — Craig Belcher

McCoy Tyner, “Guitars” (High Note)
One of the most original and distinctive pianists in jazz, McCoy Tyner served up great slabs of percussive chords that simultaneously grounded and accelerated John Coltrane's explorations. That the brilliance of his legendary '60s group illuminates the vital work Tyner's done since is not so much a problem for him as a challenge for his sidemen: Interplay with his big, muscular sound is not for the timid.

That's the blessing and the curse of “Guitars,” a concept recording that pairs the pianist with a series of mostly prominent mostly guitar players. It's a pleasure to see the underappreciated Marc Ribot in this context — his hard-edged sound powers through the pianist's “Passion Dance.” John Scofield holds his own on the equally charging Coltrane standard, “Mr PC.” But Bela Fleck's banjo lacks the sonic power to do much more than nibble mouse-like at the edges of “My Favorite Things” — he makes it very clear that Coltrane's not here. Young blues star Derek Trucks sounds tentative on his two pieces (especially “Greensleeves” — another Coltrane-era classic that fumbles until Tyner comes in).

But it's not a matter of mere intensity. The softer-edged Bill Frisell and Tyner sustain the most effective interplay on the last three cuts. These sound more like collaboration than a meeting engagement; it would be great to hear more of their work together. And, guitars or not, any trio with Tyner, bassist Ron Carter and drummer Jack DeJohnette is going to be great. Giving a bit of extra value, a DVD of the sessions is packaged with the CD. HHHHI — Peter McElhinney