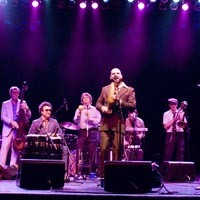 Michael Tilson Thomas' cycle of Gustav Mahler's symphonies nears completion with Das Lied von der Erde (The Song of the Earth), a symphonic song cycle with texts drawn from Hans Bethge's German translations of ancient Chinese poems. Like much of Mahler's music — only more so — this work throbs with nostalgia and dramatic introspection, inviting the listener "to contemplate life's brevity," as annotator Michael Steinberg puts it. (Fittingly, perhaps, the composer died six months before the November 1911 premiere of Das Lied.)

Tilson Thomas has teetered along a fine line in this series, balancing Mahler's garrulous, grand-scale romantic rhetoric with tempos on the brisk side. He has an ear for orchestral transparency that keeps the music's venturesome harmonic language and colorful expressive effects from being obscured by overly lush strings and blaring brass. It's a rare feat for a large orchestra to produce real chamber music, but under this conductor's guidance, the San Francisco Symphony pulls it off.

Their vocal collaborators are tenor Stuart Skelton, whose top notes sound a bit belabored, but who turns that to bittersweet advantage; and baritone Thomas Hampson, whose mastery of both Mahler and the fine expressive inflections of art-song resonate memorably in "Der Abschied" ("Farewell"), the half-hour soliloquy that concludes the cycle.

The seven tracks are groove-extended and feature the militant political stance of original Afro-Beat (some say the music has since gone friendly with Femi Kuti performing and sideling with hip-hop stars the Roots, Common and even Richmond's D'Angelo). But this debut has it all: the strict band arrangements, the war chants, the political themes and poetic lyrics.

The set begins with "Many Things," written by Seun, with lyrics reflecting a tale of corruption and disdain at government lies in Nigerian politics. "Don't Give that Shit to Me" by Adedimeji Fagbemi builds up the protest with horns flaring alongside multiple percussion instruments. Seun performs fine alto sax and organ while his raw vocal ability echoes his legendary father even more so than Femi Kuti does. The Egypt 80 Band sounds fresh and intense on every track; the spirit of Afro-Beat marches on.

John Adams, the composer of "Nixon in China," "The Death of Klinghoffer" and other music dramas drawn from recent history, takes on a much bigger subject in "Doctor Atomic," an opera on the creation of the atomic bomb, what that did to its creators and, subsequently, to the rest of us.

Peter Sellars, who directed the opera and prepared its text from the firsthand accounts of builders of the bomb and bits of evocative poetry, describes the piece as "an American epic. … that asks where America is in its large cycle of pre-eminence. What is the type of expertise, intelligence, wisdom, brilliance, genius, that created the American century?"

That's a lot of content and context to pack into three and a half hours. Adams and Sellars manage it by focusing on the single day leading up to the detonation of the first bomb on July 16, 1945, in the New Mexico desert, and by sublimating history, politics and physics to psychology — primarily, the conflicted mind and soul of Robert Oppenheimer, leader of the team of scientists who developed the weapon. This jittery, chain-smoking, emotionally fragile yet commanding figure — portrayed forcefully yet subtly by Gerald Finley — is cast as a modern-day Faust whose torment reaches its apogee in the aria, "Batter my heart, three person'd God" (from John Donne's "Holy Sonnet XIV").

Adams says he modeled his score on 1950s "doom and gloom" sci-fi movie soundtracks, but more audible antecedents are the impressionistic atmospherics of Debussy and Messiaen. His vocal writing, passionate in love scenes and soliloquies, stentorian elsewhere, asks a lot of singers without offering the usual operatic payback of lyricism and sensuality.

Finley's edgy dramatic vocalism is matched by that of other principal singers, notably Jessica Rivera as Oppenheimer's bereft, alcoholic wife, Kitty, and Eric Owens as Leslie Groves, the Army general bingeing on chocolate as he tries to quell rebellious scientists and precarious weather to meet a tight wartime deadline. As in many of Adams' theater works, much of the drama is given to a latter-day Greek chorus of everymen and -women, here conveying the frenzy of the project in its climactic day and the shock and awe of its outcome. The bomb goes off, symbolically, in their faces — and the viewer's.

This video of "Doctor Atomic" was shot during a production last year at the Netherlands Opera in Amsterdam. The cameras take the viewer to places a theater audience cannot reach, with close-ups, overhead perspectives and other videographic techniques that animate and concentrate the drama. A new staging (from which Sellars bowed out) is running at New York's Metropolitan Opera and will be presented in high-definition video at movie theaters. The Met's videocast will have to go some distance to match the DVD's production values. HHHHH — Clarke Bustard

At the Capital Ale House release party for its new CD, Bio Ritmo was both convincing and constrained. Convincing in the meshing of its various moving parts — a vertiginous tumble of crisp Latin rhythms, tight ensemble horns, percussive keyboards, sharply focused solos and vocals that slide through and drape over the beat. Constrained in that in the limited room onstage, the band was as crowded as the dance floor.

The same challenges apply in translating the smart, democratic and musically omnivorous appeal of a salsa show band into digital bits on a plastic disc. Salsa song forms are only the superstructure Latin for the band, which incorporates jazz improvisation, rollicking piano runs and psychedelic electronics into the mix. The selections are all upbeat and danceable; the closest they come to a ballad is the slightly subdued "Dime Vide," unless you count the opening of the closing, Zappa-esqe "Bonus Track."

In past recordings various facets of Bio Ritmo have been captured to good effect, but "Bionica" may be the most balanced and successful of the lot. Even with its salsa-oriented material, clave beats and lyrics en Espanol, the band's reach and appeal transcend genre. HHHHI — Peter McElhinney