Reviews of recent music by U2, the Black Lips, Funkadelic and others. 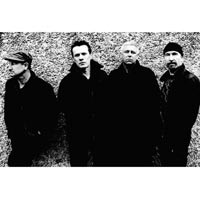 U2, “No Line on the Horizon” (Interscope)

New York Times op-eds notwithstanding, words aren't Bono's medium. His lyrics stumble and stagger clumsily from one big idea to another, but he compensates with a heart-on-sleeve howl and an inventive set of musicians behind him. On its 11th studio album, however, U2 fails to back him up: The Edge reworks some old “War”- and “Pop”-era riffs, Larry Mullen Jr. uses the same snare bounce in every song, and bass player Adam Clayton remains the band's Ringo. That leaves Bono on thin ice, carrying heavy sentiments about ATMs, subways, and his soul as “A small child crossing an eight-lane highway on a voyage of self-discovery.” It works well enough on “Magnificent,” with its eerie vocal-guitar solo, but elsewhere, U2 deploys wordless hooks that sound easy and empty. With the world facing down an enormous financial crisis, 2009 should have been U2's big moment, but it fails to live up to the occasion. “No Line” sounds enormous and eager, yet fatally ponderous. HHIII — Stephen M. Deusner

Ernest Chausson isn't ranked in the top tier of romantic composers, but few scores are more absorbingly romantic than his Concerto in D major for violin, piano and string quartet — music of “drama, passion and vibrant color” that rides “waves of emotion,” as violinist Soovin Kim writes in notes for this recording.

The Chausson concerto is also music of delicate balances, between moody reverie and skittish energy, between the brilliance of the solo violin and the darker mass of the piano and string quartet. Kim, pianist Jeremy Denk and the Jupiter String Quartet play up those contrasts quite vividly; but their tempos are too measured, and in the most densely scored passages this performance sound heavy-handed and congested. The disc made 25 years ago by the French violinist RAcgis Pasquier and friends (Harmonia Mundi) still sets the standard for this music.

The Sonata in A major for violin and piano by Gabriel FaurAc, which complements the Chausson concerto in both tone and style, finds Kim and Denk playing in a more authentically French accent, with finely spun textures and air between instrumental voices. HHHII— Clarke Bustard

Longtime P-Funk fans know that Detroit's Westbound records is where George Clinton originally set up shop with his acid-influenced theatrical musical ensemble, Funkadelic. “Toys” brings nine unreleased tracks from the vaults representing early Funkadelic at its best. “Heart Trouble AKA You Can't Miss What You Can't Measure” is a revamped number from Clinton's doo-wop years with the Parliaments, rearranged as an up-tempo rock jam. “The Goose (That Laid The Golden Egg),” written by the late guitarist Eddie Hazel and Clinton, illustrates Hazel's intense performance style, riding alongside Bernie Worrell's classical and jazz-influenced organ playing. “Talk About Jesus,” a 1971 piece cut from the “Maggot Brain” album, features Tawl Ross playing guitar through a Leslie organ speaker alongside the gospel-influenced vocals of Hot Buttered Soul (Isaac Hayes' background singers). A special CD-ROM video of Funkadelic performing “Cosmic Slop” on the streets of Manhattan circa 1973 for a promo shoot is also included. Overall, a must-have for any P-Funk collection. HHHHI — Darrl Davenport

The Black Lips make throwback garage rock, what they call “flower punk,” which wears its influences loudly. From the 13th Floor Elevators to the Stooges, the Animals, the New York Dolls, and even gothic hip-hop (on one of the album's best tracks, “The Drop I Hold,” a burned-out slow rap set to a dark orchestral loop), this young Atlanta band expertly navigates seedy '60s and '70s vibes. All the trademarks are here: echoed vocals, haunting organs, fuzz bass and droning guitar, tape masking sound effects and freak power lyrics involving “monkeys fucking beach balls” and “Atomic bombs in Vietnam/Black Lips dot com in Islam.”

If the band focused more in the direction hinted by its hip-hop-inspired track, melding old and new, instead of recreating pitch-perfect psych rock, it might give its audience something more substantial to savor. Still, this is an enjoyable party record filled with howling retro rock that could probably confuse even a savvy record collector as to its time period. HHHHI— Brent Baldwin

A local band with global reach, Neighborliness (aka the John Winn-Tet) first toured the Far East in 2004 after winning the State Department-sponsored 2004 Kennedy Center Jazz Ambassador's contest. This CD serves as celebration and merchandise for its 2009 return (the cryptic title is a big-hearted bit of fractured English encouragement from the trip's Russian translator.) The material here ranges from the anthemic, Beatle-esque calculation of “Vladivostok” to a quietly swinging reworking of John Lennon's “Instant Karma.”

The compact, charismatic John Winn is an inventive singer — although his off-the-cuff improvisations are necessarily constrained on a fixed recording, and his saxophone and clarinet playing are polished and assured. Bandmates — bassist Curtis Fye, drummer Robbie Sinclair and pianist Daniel Clarke — are successful graduates of the local scene. The tune for “Center Ring” was originally written by Clarke for his current employer, singer k.d. lang. Clarke thought the kaleidoscopic melody was a bit much for lang, but combined with off-kilter lyrics from Winn it's one of the CD highlights. A very good effort from one of the best Richmond bands of the past decade. HHHHI — Peter McElhinney