Reviews of CDs by the Dead Weather, Joe Lovano, Levon Helm and more. 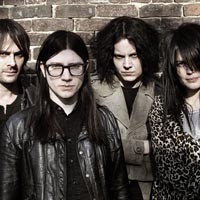 The Dead Weather
“Horehound”  (Reprise)
On his latest side project, Jack White of the White Stripes hangs back on drums and relinquishes center stage to the Kills maven Alison Mosshart. The hypnotic result is a dark and dank world where bass lines meander like hungry strays, scattering when the cymbals kick up and droning guitars howl alongside Mosshart's seductive vocals. She growls, “I'd like to grab you by the hair and drag you to the devil,” harnessing feedback like a masochistic lover on the ferocious “Hang You From the Heavens,” and tangles with White on “Treat Me Like Your Mother,” proving far from coy. Innuendos abound while the disc mashes up sleaze, squeals and muffled chokes with beats and keys. Without being contrived, this garage rock gone weird works. Songs of blood and dust on your boots haven't sounded this good since Cash shot a man in Reno.  HHHHI — Hilary Langford

Levon Helm
“Electric Dirt”  (Vanguard)
The former drummer for the seminal rockers the Band, whose wizened vocals anchored the group's most legendary songs, Levon Helm scored a major comeback from throat cancer with his Grammy-winning folk album, “Dirt Farmer,” in 2007. His latest is a more upbeat affair returning him to electric territory and homespun country blues with some jazzy, big-brass fervor tossed in. Produced by multi-instrumentalist Larry Campbell (Bob Dylan), and featuring other seasoned musicians, “Electric Dirt” heaps up a pure mound of Americana heaven with authenticity to spare. There are several hearty covers: a jubilant “Tennessee Jed,” the finest cover of a Grateful Dead tune in ages; a boozy version of Randy Newman's politically tinged New Orleans snapshot, “Kingfish” — with tight horn arrangements by the masterful Allen Toussaint; and a rollicking closing take on Billy Taylor's “I Wish I Knew How It Would Feel to Be Free” (made famous by Nina Simone). The clearest throwback to Helm's vintage days is “Growing Trade,” a mellow, loping track about a struggling farmer forced by economic circumstances to grow weed.  But for all its musical pedigree, the album is held aloft by Helm's salty, lived-in vocals — weathered by age but more soulful than ever.  HHHHI — Brent Baldwin

Maxwell
“BLACKsummers'night”  (Sony Records)
Trading his wild bohemian afro for a tapered, clean cut, singer Maxwell emerges from a silence stretching from 2001's “Now” with a matured sense of artistic daring. “BLACKsummers'night” further defines his intelligent, soulful R&B. His falsetto brings back the days of honest crooners with sensual ballads like his current radio darling, “Pretty Wings.” The lyrics are as thoughtful as the explanation for his absence from the scene, courtesy of the accompanying DVD: “You live first and create after, for it becomes an organic experience of which people can understand exactly what you were feeling within each word, even if the full story behind the music is not known.”
Some listeners may find the album's meager nine tracks off-putting, but the vocal quality and musical depth remains undiluted by the fluff of recent artists boasting many more songs per album. As comfortable with up-tempo grooves such as “Cold” and “Love You” as he is with the slower ballads, Maxwell is worth the wait. HHHHI — William Ashanti Hobbs

There are musicians whose presence transforms any session the way adding chocolate syrup transforms anything into a species of chocolate. Saxophonist Joe Lovano is the opposite. His distinctive, full and rounded tone sounds at home in every kind of setting, from lush romantic ballads to the jagged edge of free improvisation. As an ideal sideman and a frequently recorded leader, he seems to be everywhere, as demonstrated by these three four-star recordings released during the past three months. — Peter McElhinney

Joe Lovano Us Five “Folk Art” [Blue Note]
“Folk Art” features his current band, whose multivarious sound is constructed on the foundation of doubled drums — the contrasting-complementary approaches of New York percussionist Otis Brown III and Cuban Francisco Mela. The two are split into separate left-right channels, providing maximum headphone impact. The songs, as the title indicates, start off straightforwardly, but organically develop through ever-shifting subgroupings of the musicians — the playing anything but simple. The CD also features prodigy bassist Esperanza Spaulding, who plays with solid exuberance.  HHHHI

Masada Quintet (featuring Joe Lovano) “Stolas: Book of Angels Volume 12” [Tzadik]
Masada started out as John Zorn's Jewish take on the Ornette Coleman Quartet.  It was a wonderful band, but after 18 mostly great recordings it had pretty much explored the territory and Zorn seemed more interested in working with other bands (Bar Kohkba, Masada String Trio, etc.). “Stolas” is almost a full return to Masada (Dave Douglas, Greg Cohen, Joey Baron, but no Zorn), augmented with the pianist Uri Caine and of course, Lovano — a very fine CD. HHHHI

Steve Kuhn Trio with Joe Lovano, “Mostly Coltrane” [ECM]
One of the minor “might have beens” of modern jazz history is: What would have happened if John Coltrane kept his original pianist, Steve Kuhn? If “Mostly Coltrane” is the guide, the answer is “nothing horrible.” While Kuhn's soft, shimmering approach doesn't have the visceral impact of Coltrane pianist McCoy Tyner's percussive block chords, he makes a great complement to Lovano's rich embodiment of aspects of Coltrane's style. The playing is adventurous within the crystalline constraints of the ECM sound. The accomplishment of this CD is that it's both a Coltrane record for people who don't like Coltrane and for people who do. HHHHI