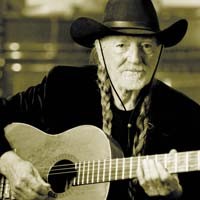 Back in 1978, before standards albums became cop-outs for faded rock stars, Willie Nelson recorded a full record devoted to what's commonly called the great American songbook, setting decades-old numbers by Hoagy Carmichael, Irving Berlin, and other composers in gently country arrangements that show off the sturdiness of the songs and the delicacy of his voice. More than three decades later, Nelson has recorded something of a sequel to “Stardust” with the new “American Classic,” which gathers a dozen standards from the same songbook. His voice, though ragged from wear and age, still sounds stately as he playfully shuffles around the meter, and Norah Jones proves herself his ideal duet partner on “Baby, It's Cold Outside.” The effect, however, is diminished by the slick production. Whereas “Stardust” set its standards in spare, elegant arrangements, “American Classic” slathers on the gooey strings and sentimental piano, exaggerating its overly tasteful jazz setting. There's no sense of radical reinterpretation here; Nelson's just singing old songs. HHIII  — Stephen M. Deusner

Released at the cusp of the new decade and the new millennium, Radiohead's fourth album, “Kid A,” played like the culmination of all that millennium jitteriness, as if they had seen the future and it was worse than we could have imagined. Jettisoning the art rock guitars and sweeping arrangements, the band experimented with electronic beats and programmed noise — sounds that would define its output for the next 10 years.

By contrast, “Amnesiac” is full of beautifully tense moments such as “Knives Out” but never quite coheres into a larger statement. “Hail to the Thief” was a similarly uneasy mix in 2003, but its mix of rock drama and electronic detachment sounds more compelling six years later. Crammed with B-sides and EP tracks, these three reissues follow the similar repackagings of Radiohead's '90s output, and heard together all six albums portray a band that started out as a one-hit wonder but made a career playing increasingly dystopian pop music that still sounds paradoxically human. — S.D.

Yo La Tengo is known for being stylistically restless. It's done several film soundtracks (“Old Joy” and “Adventureland” among them) and a cinematic feel percolates through its albums in the form of rambling, experimental tracks that can become self-indulgent. Thankfully, the Hoboken trio can still crank out catchy indie-rock songs, often buoyed by drummer Georgia Hubley's lilting vocals that remain reassuring with their almost dovelike cooing qualities.

No surprise the band's latest is another musical grab bag — tossing soft, melancholy tracks (“When It's Dark” has a lovely, country-tinged melody) alongside upbeat, musically nostalgic numbers. A flow never really develops, but there are enough keepers to listen intently, such as the softly beautiful, '60s chanteuse melody of “Avalon or Someone Very Similar,” or the barreling garage rocker, “Nothing to Hide,” featuring heavily distorted guitar, propulsive vintage keyboard and a briefly strangled solo. The band is well versed in the history of American music and this studied approach accounts for some interesting production flourishes. This album flirts with everything from Jack Nitzsche-influenced echo and strings to Krautrock and Motown with varying success. But in the end it comes down to the songs, and Yo La fares better when it keeps focused, as it does on about half of this record. Unfortunately, it closes with three dragging tracks clocking at 10 minutes or longer. Popular songs, these are not. HHHII — Brent Baldwin

Yo La Tengo performs Thursday, Sept. 17, at the 9:30 Club in Washington with Endless Boogie.

Hard to believe it's been 25 years since the scum dogs emerged in Richmond and began their mission to kill everything and escape our miserable planet. Shoving the theatrical shock rock of forefathers Kiss and Alice Cooper to its logical bloody end, the group has become a Richmond arts institution, keeping generations of talented artists busy at the Slave Pit (now on Hull Street), helping along local bands such as today's platinum sellers, Lamb of God, and earning metal-legend status globally for hard touring and their rite of passage, hot-mess live shows.

Gwar's studio albums have been a mixed bag but one thing you can count on is technically impressive playing and depraved lyrics delivered with riotous flare by longtime frontman Dave Brockie (Oderus Urungus). This 11th full-length marks not only the thundering return of bassist Casey Orr in the Beefcake the Mighty role, but also a return to Metal Blade Records. The band savors the occasion through re-energized thrash guitar (Derks and Smoot are on fire), pummeling double bass drumming, and more offensive lyrical humor, which you can surmise from a song like the brutal ditty, “Make a Child Cry” with the partial chorus: “Make a child die, die child die!” Still longing for his crack fix, Oderus is in top vocal form throughout, from the epic, six-minute opener to solid Gwar canon fodder such as “Let Us Slay,” which finds the singer giddy with manic punk energy while blasting traditional values. (“We have no need for your crippled Christ!”)

Gwar knows what its fans want and delivers the goods in loyal, metal-head fashion. It's tried to slightly tweak the formula before but seems to have settled on music that translates well live; that is, relentless thrash you can bang your head to while watching celebrities like Paris Hilton or one of our recent presidents disemboweled or hung on stage. Now they just need a new video shot around Richmond that features hypnotized locals with black eyes randomly pillaging and humping pine trees. HHHHI — Brent Baldwin