Reviews of recent releases by the Decemberists, Leon Fleisher, Palominos and more. 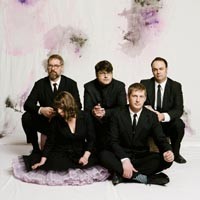 The Decemberists, “The Hazards of Love” (Capitol)
After breaking through with 2006's “The Crane Wife,” the Portland, Ore., folk rock quintet the Decemberists became known as a literary rock group — earning critical kudos and adoring NPR fans. Its atmospheric new record is an even more ambitious effort, a baroque 17-part, progressive-rock concept album with a plot involving a fair maiden sexually assaulted by a shape shifter, child murders and a vengeful queen (don't ask me).

Flamboyant frontman Colin Meloy was inspired by English folk musician Anne Briggs' 1966 work, “The Hazards of Love,” not only for the album title but also to explore spooky ballads more suited to a Renaissance fair. Yet these moody, convoluted songs and their pretentious interludes fail to move this listener to anything but hitting the eject button.

The album is packed with guest turns from the likes of Jim James (My Morning Jacket) and starring singers such as Becky Stark (Lavender Diamond), who provide a few highlights, but most of the songs die on impact. Apart from “The Rake,” in which Meloy allows the band to rock a little, there are no catchy choruses or memorable hooks buried in the '70s-influenced power ballads, or anything to warrant second listens. Maybe as a stage piece or a film soundtrack, the songs would fare better. But as a solely audio experience, I'd rather listen to an old dog dry heave into a well. Or just watch Pink Floyd's “The Wall” again. HHIII — Brent Baldwin

The Decemberists perform at the National on Friday, June 5, with openers Blind Pilot. Show starts at 9 p.m. and tickets start at $28. 612-1900 or www.thenationalva.com.

Leon Fleisher, “Mozart piano concertos” (Sony Classical)
In the 1950s and early '60s, Leon Fleisher was poised to become the leading American pianist of Beethoven, Mozart and other Austro-German classical and romantic music. Then focal dystonia, a neurological affliction, disabled his right hand. During what should have been his peak years, he played piano works for the left hand only. In his 70s, with the aid of Botox injections and other therapy, he finally regained use of the right hand.

This disc, the third recording the now-80-year-old Fleisher has made since his return to ambidexterity, revisits Mozart, as he plays and conducts the Stuttgart Chamber Orchestra in two concertos in A major — No. 12, K. 414, and No. 23, K. 488 — and is joined by his wife, Katherine Jacobson Fleisher, in Mozart's two-piano version of the originally three-piano “Lodron” Concerto in F major, K. 242.

Fleisher's post-recovery concert performances, such as his April 2007 date at the University of Richmond's Modlin Center, have packed an inspirational punch: artistic expression, pent-up for 40 years, finally given voice. This disc is a bit of time travel, back to Mozart as it was played when Fleisher was young. His tempos are measured. His playing is declarative in fast movements, introspective in slow movements. He sticks to Mozart's score, not elaborating on piano lines with grace notes, and doesn't attempt to make the modern piano sound like an instrument of Mozart's time. There's little of the playfulness and whiff of jazzy exuberance that many younger pianists bring to this music. This is great-man Mozart, anticipating Beethoven and Brahms. HHHII — Clarke Bustard

Steve Kuhn, “Life's Backward Glance” (ECM)
The '70s were the era of ecstatic piano performances, and no one recorded them more frequently or pristinely than ECM. Keith Jarrett — especially his “Koln Concert” — was the archetype. But Steve Kuhn was, if anything, even more rhapsodic, weaving huge, cascading melodic soundscapes of shimmering beauty.

The era was brief. New Age labels like Windham Hill swamped the subgenre in a flood of sickly sweet imitations (even the packaging was an ECM pastiche). In any case, Kuhn never achieved anything like the visibility of Jarrett at the time or later, when his recordings retained only a glistening glimpse of his '70s style. That changed with 2004's “Promises Kept” (ECM), a celebration of his musical past burnished with a classically romantic string section. “Life's Backward Glance” continues the retrospective with a straightforward repackaging of three long-unavailable recordings.

The arrangement on the CDs is curious — first, 1977's small group “Motility,” then 1979's “Playground” featuring vocalist Sheila Jordan. The collection closes with the earliest and best, 1974's “Ecstasy,” a solo set that organically shifts from pastoral lyricism to minimalist trance to grand, swelling floods of notes. Throughout, the melodic explorations are infused with a rueful intelligence that prevents the music from slipping into mere prettiness. Frankly, it's worth buying the set for “Ecstasy” alone. HHHII — Peter McElhinney

With a clean tone and plenty of staccato picking, Bishop navigates this non-Western scaled music with grace and precision, showing vigorous regard for the traditional melodies while Moroccan chanters, bass and softly pedaling tablas help complete the exotic sonic palate. Bishop sounds more like an explorer here than someone performing a tribute, swerving and diving through the melodies, seemingly energized by such a vibrant rhythm section. About half of the songs are originals. The other half includes songs by Middle Eastern and North African composers, including Mohammed Abdel Wahab, the Rahbani Brothers and Farid Al-Atrache. HHHHI — Brent Baldwin

Palominos, “Egos” (Self-released)
You'll want to sip some Jack on the rocks while listening to the twang-tinged, Southern rock of the Palominos. Fuzzy guitars and raucous drum kicks usher in the title track with a rhythm taken right out of the British invasion, all of which persist for the duration of the disc in different incarnations. “Hint of Jealousy” slows things down a bit with a few doo-wop harmonies and a melodic guitar, while “I've Had Enough” picks a fight with the line, “When it comes to making love, it's better it's not us” and chugs on with the pace of a Cash-inspired freight train. Over nine searing cuts, it's all red dirt and road songs, scorned women and a tad of heartache. Most of all, it's a damn good time. HHHHI— Hilary Langford