Hearty pub food and a warm welcome await at O’Toole’s. 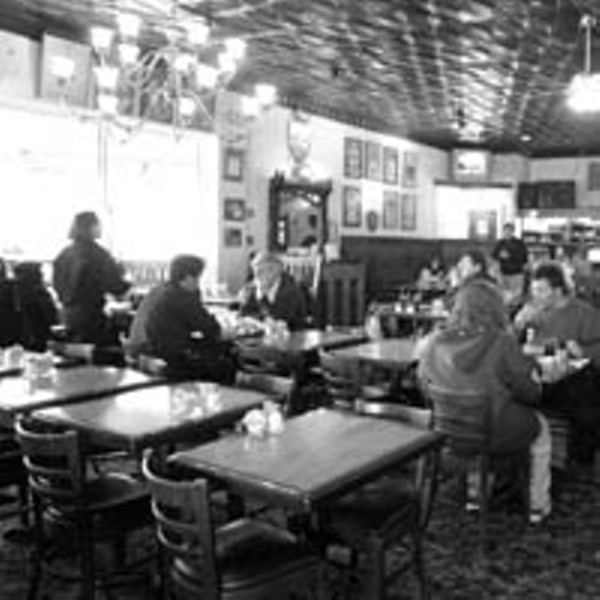 And you can’t get any more Irish in Richmond than O’Toole’s Restaurant and Pub on Forest Hill Avenue in South Side. A landmark for more than 40 years, it’s the kind of homey neighborhood place where you can nosh on a sampler platter ($7.29) of chicken tenders, mozzarella sticks and some of the best potato skins I’ve had. You can also order a 12-ounce bourbon-glazed New York strip complete with your choice of sides and house salad ($14.95).

There are stir-fries, pastas and pizza, including an excellent and fully loaded Greek pizza overflowing with spinach, tomatoes, black olives, feta and piquant pepperoncinis (small $6.95). As if this weren’t enough, nightly dinner specials include a diner-style meatloaf ($7.95). Served with starchy brown gravy, it was overcooked and lackluster. A better option would be the tender and delicious 14-ounce prime rib ($14.95) Dashed with salt and pepper and resting in its own pan juices, it was as a good steak should be.

And what Irish pub would be complete without a platter of fish and chips ($11.95)? As the only “typical” bit of pub grub on the menu, it’s a winner. A large — hanging-over-the-sides-of-the-plate-large — beer-battered cod filet was deep fried to perfection and served with atypical fries, thick hand-cut potato chips. The fish was as good (or better) than any I’ve had in pubs in the U.K., and I highly recommend sprinkling your chips with a little malt vinegar for the true pub experience.

O’Toole’s also offers an array of desserts including a huge, decadent brownie sundae ($3.95) topped with vanilla ice cream and canned cream. The pecan pie ($3.25) is a good choice served warm with a dollop of melting ice cream.

Although there may be a few hits and misses at O’Toole’s, the place itself overshadows the food. If you’ve got more than a touch of the green in you, find your family’s crest from the extensive display lining the walls, or sing a few tunes by the old piano. It’s a down-to-earth good time, and just the way original owner, Jim O’Toole, designed it to be.

(Look for the framed photo of O’Toole as a young man sitting next to a dancing Cesar Romero — better known as the Joker from the original “Batman” television show — during World War II.)

When most restaurants don’t make it past the two-year mark, going on steady for 40 speaks volumes. There’s something to be said about the luck of the Irish. Maybe it’s that there’s more than luck going on. S