Photosynthesizers kick off Shadrock with a muscular pulse. 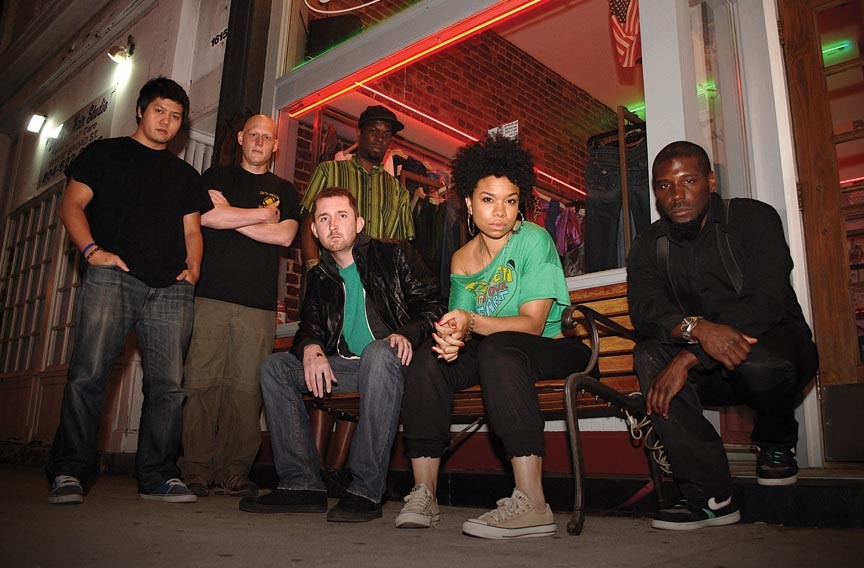 The brothers and sisters of Photosynthesizers haven't just built a fan base, they've adopted a family. If you've attended a show or rocked one of their tracks, you should consider yourself a member of this growing clan.

The six-piece, live hip-hop ensemble enjoys engaging with fans so much, it makes a point to finish live sets early enough to go out and hang with the audience. "People really want to support you if they have an understanding of you," says vocalist Samantha "Samsun" Hewlett. It appears to be working, as readers voted the Photosynthesizers as best hip-hop group in Style Weekly's 2011 Best of Richmond poll, and the group scored the crucial opening slot of the Shadrock Music Festival.

Reaching out also has fed the band's creative process, as some songs narrate other people's biographies instead of coming from a first-person perspective. "We're like data collectors," vocalist Maurice "Barcodez" Jackson says. "Photosynthesizers is the way that it is because [we're influenced by] our relationship to Richmond and every individual we meet." The result is a soulful yet muscular sound that incorporates a hybrid of musical styles from all over the globe. Nothing is off-limits.

Besides, guitarist Joshua "J" Bryant, bassist Mike "Mikemetic" Williams and drummer Phillip "Dr. Data" Nguyen are adamant about not writing the same song twice. New keyboardist Chelsea Temple, who once performed with Hewlett in Beast Wellington, contributes an additional feminine dimension to the group's instrumentation and harmonies. The group frequently works ahead, and developing songs are dropped into the live repertoire as musical interludes before Hewlett and Jackson have written vocal parts. "We put a lot of thought into what comes out of our mouth," Hewlett says. "You don't find that a lot in radio-ready hip-hop."

They've also put all of their eggs into performing rather than recording, so with the exception of six tracks on their 2010 debut EP, "Speakers in Black Holes," the majority of their set list can't be taken home. That scenario will change with Photosynthesizers' first full-length album, tentatively due out by the end of the year. "The good thing is we're testing the material against our audience, before it's established," Jackson says.

It's just another way their fans have a hand in shaping the music. But what about the role of Shadrock festival headliners De La Soul? Jackson and Hewlett cite such groups as De La Soul, A Tribe Called Quest and Jungle Brothers as offering an alternative in the world of hip-hop, suggesting the same about Photosynthesizers today.

"De La ushered in a more abstract approach to music," Jackson says. "They made me feel comfortable in my own skin; otherwise I might have been a gangsta rapper." So Shadrock will be the second time De La Soul helps give the young MC a voice, a unique platform to share his band's art with thousands of friends at once.

Photosynthesizers tease that they have something special in the works for getting us hyped up early April 28 on Brown's Island, but details are being kept under wraps. One thing's for certain, Jackson says: "We just give kick-ass shows, that's what we're known for."

Photosynthesizers will perform April 28 as part of the Shadrock Music Festival on Brown's Island. Tickets are $35-$100. Visit shadrockmusicfest.com.