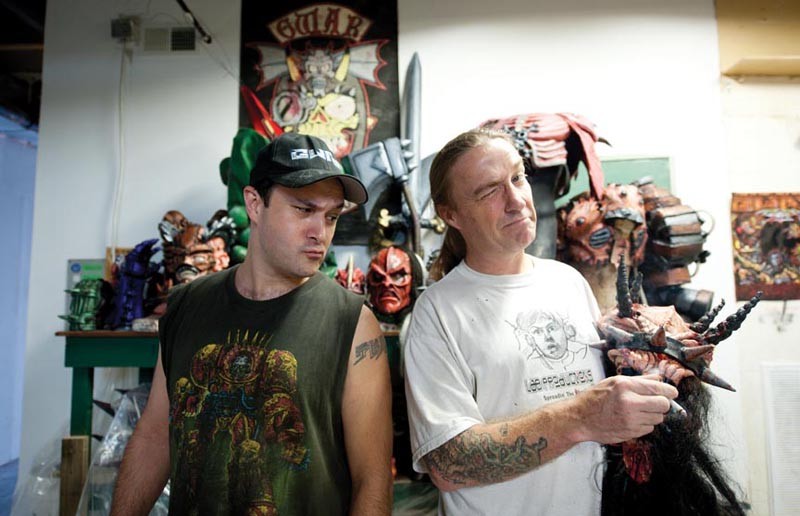 It's been a busy year for Oderus Urungus, Richmond's best-known crack addict monster with the decrepit phallus from hell.

"It makes me laugh that somewhere in the Fox corporate structure, they were actually debating Oderus disemboweling a rubber facsimile of someone who wasn't even in office," Brockie says. "Fair and balanced, my ass."

But Brockie has reason to keep his "Cuttlefish of Cthulhu" erect: Gwar is in its 27th year and its hedonistic, end-of-summer Gwar-B-Q blowout is being held at the National -- a last minute change of venue from Hadad's Lake (see statement below) -- where it should provide Oderus with plenty of blood, beer, and babes to soak up his mutant tears.

The event, which started as an informal annual party, has been rejuvenated by the success of the local Best Friend's Day festival. "In a weird way, I think Gwar inspired them with Slaughterama, then they grew their shit and inspired us to bring Gwar-B-Q back," Brockie says. "We see them as bookend events that draw people from all over the world to Richmond to party."

The 2011 Gwar-B-Q will include loads of local metal, as well as the American A-Hole Karaoke contest, Spew-O-Lympics, and an Oderus Kissing Booth in a hot, plywood box. (Unfortunately, because of the venue change, there will be no meat grilling.)

Musical acts include a full set by Gwar, which will unveil its new Beefcake bassist before tar-and-feathering him and feeding him to the World Maggot -- as well as a much-anticipated reunion show from Kepone, an underrated '90s Richmond rock trio signed to Touch and Go featuring ex-Gwar bassist and University of Virginia grad instructor Michael Bishop, local artist and guitarist Tim Harriss and artist and drummer Ed Trask.

Ever the showman, Brockie gleefully notes there will be more media on hand to cover the event: G4 is sending "Attack of the Show!" co-host, Candice Bailey, Metal Blade Records will send its first signed comedian, Don Jamieson (next to sign will be Oderus with his "Spoken Turd" album), and original "Jackass" member Raab Himself will be one of the spew judges ("We're not sure what we're spewing on," Brockie says -- "hopefully a lot of girls in string bikinis.")

Gwar drummer Jizmak da Gusha (Brad Roberts) was heavily involved with this year's fest, and says it's Gwar's way of giving back to the community that spawned them. "It's a springboard for the music, arts and culture of a city that should have more recognition," Roberts says. "We don't expect to make money."

Brockie concurs that while he hopes the festival will make organizers rich some day, he doesn't see it coming until "we're in our late 70s, when we're a bunch of rubber-underwear-wearing, incontinent, barely-handle-the-remote people."

Both Brockie and Roberts believe Gwar-B-Q and Best Friends Day could become huge festivals (BFD already passed 3,000 attendees) with no limit to the acts they could attract. One day you could be watching Slayer and Motorhead on the mainstage.

And it will all be done without supportfrom the city, as if that needed stating.

"This town has a reputation, despite what the neocon and Tea Party fucknuts might think, for music and art," Brockie says. "All the other things are really bad: cancer, Philip Morris, Capitol of the Confederacy, completely ineffective, inefficient, junkie-ridden City Council members; they can't even get a halfway decent stadium for the Flying Squirrels. But the very element that the 'powers that be' look down on and frown the most at, actually gives the city its cultural identity."

Gwar also has the added experience of having played festivals around the world--and you wouldn't think it, between the booze and drugs and assorted smut memorabilia, but they were taking mental notes.

"We played a lot of these festivals in America and they're about 20 years behind festivals in England and Europe," Brockie says. "There, you can't find a cop, yet people are well behaved, toilet facilities are adequate. We played Bonnarroo, Bamboozle, and now we want to have a fest of cutting-edge, amazing rock and roll that showcases Richmond area, art, music, and food. I see no reason why this fest cannot get bigger and better every year."

Brockie says that next year he hopes the two kindred festivals will be further apart to "bookend" the summer.

A day after Gwar-B-Q, Brockie leaves for Los Angeles where he will begin filming a new horror-comedy show for FEARnet, "Hollistan," which stars filmmakers Adam Green ("Frozen"), Joe Lynch, and Twisted Sister's Dee Snider as the frustrated singer of a Van Halen cover band. Oderus will play an imaginary friend of the directors who lives in an extra-dimensional portal, or "smelly closet" filled with a slurry of dirty socks, emerging occasionally to give the protagonists "really, really bad advice."

It's all part of the midlife plan to diversify Gwar creative output.

"We realized a long time ago, if you keep cranking records and touring, that's a self-fulfilling prophecy and the prophecy is death. We can't do this forever. When I hang up the sword, I will be passing it down to an extremely violent child," Brockie says, as a patriotic symphony swells somewhere. "I want to make sure the laws of Gwar are deeply in stone at that point, so I can check myself into an old folks home and enjoy the rest of my years in drug-soaked delirium. It's essential we get this shit sorted out before that happens, 'cause really it could be any moment now."

Gwar-B-Q will be held Sept. 17 at the National Theater, 1708 E. Broad St.. Tickets range from $20 to $75 (includes official T-shirt, live DVD, "Meat and Beat" signing and a chance to appear onstage). For information, visit gwar.net or thenationalva.com.

Henrico County would not issue the proper licenses for the event to run legally despite Slave Pit's intense efforts to placate the authorities.

Slave Pit's Dave Brockie had this to say about the debacle:

"We feel we have been treated in an unjust manner. There have been music festivals for years in Henrico County with no problem OR licenses. We jumped through hoops, hired cops, made safety plans...and at the last second they chose not to give us the permits."

"I woke up today and heard this. I was just about to put a bullet through my head when we got a call from the National Theater. They had originally booked some loser from 'America's Got Talent,' but he cancelled...so the National saved the day for us and agreed to open their doors to the event. As you read this we are scrambling madly to accommodate all of the acts and events we had planned, and present the full spectacle of the GWAR-B-Q."