Not Your Grandma’s “Cinderella”

Virginia Rep’s updated take on a timeless story provides a better role model for young girls in the audience. 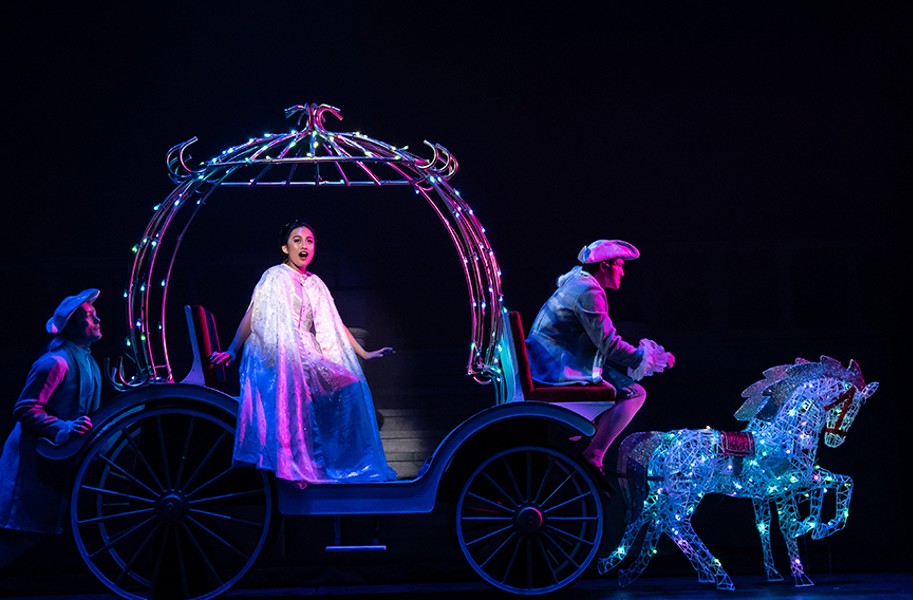 Rodgers and Hammerstein’s “Cinderella” has always felt like a bit of a snooze fest to me. As a little girl, I was familiar with the 1965 television broadcast version, starring Lesley Ann Warren. I guess I’ve never been the type of girl who was satisfied with staying “in my own little corner, in my own little chair,” and I wasn’t interested in stories about girls who didn’t want more than that. As an adult, I recognize how insidious and damaging it can be for a little girl to consume media with such a limiting message, and I applaud my younger self for rejecting the version of this story I was fed.

But I was pleasantly surprised when I saw the Virginia Repertory Theatre production, featuring Douglas Carter Beane’s updated book. He definitely got some flack for making the story too political when it debuted on Broadway back in 2013. But I would argue that “Cinderella” has always been a political story concerned with wealth and power structures: It’s a peasant’s fantasy of upending the whole system — and watching the birds peck out the eyes of your enemies, if you’re reading the Grimm Brothers’ version.

Beane didn’t rewrite the fairy tale, he just made it relevant to the 21st century. His version includes new characters, stepsisters you kind of like, and added plot points that give Cinderella something to do. In this version, Cinderella wants more than just a pretty dress and a rich man to marry. She wants to spread kindness, and her interest in meeting the Prince is rooted in her desire to effect positive change in the kingdom. Oh, and in this version, when she sings about all of the things she can imagine from her own little chair in the corner, at least she’s holding a book. I really like this version of Cinderella. She’s better, kinder and she gives little girls something worthwhile to aspire to.

And aspire they will. “I want to be like her!” was a refrain I heard repeatedly at this show on opening night, surrounded as I was by little girls in their finest princess garb. Make no mistake: girls are watching closely, and they’re forming their concepts of self and what they can be and do with these representations as their basis. When a little girl aspires to be like this version of Cinderella, she aspires to be like someone who wants more than just a rich prince of a husband. And with a refreshingly diverse cast, this production gives all little girls someone onstage who looks like them.

Director Laine Satterfield plays up the humor and the magic of this story, creating lovely tableaux. But some scenes do drag a bit, especially in the second act.

As Cinderella, Quynh-My Luu gives a lovely performance. She captures the kind, gentle spirit of her character in her delivery and movement. She’s overshadowed, though, in scenes with her two stepsisters, who are both bigger, louder personalities. Audra Honaker is comedic gold as Charlotte, the uncouth, somewhat dim-witted stepsister, and Havy Nguyen is sweet and sympathetic as Gabrielle, Cinderella’s secret supporter who has fallen for the local activist, Jean-Michel, played by Durron Marquis Tyre. Susan Sanford is hilariously mean as Cinderella’s evil stepmother, and Katrinah Carol Lewis plays the fairy godmother with a sassy edge. Benjamin Lurye is a vocal standout as Lord Pinkerton, and Edward L. Simon makes for a likable Prince Topher.

Anthony Smith’s musical direction has the orchestra sounding great, and Matthew Couvillon’s lively choreography is fun to watch, especially during the action scenes, when the Prince and his men fight dragons or chase down a carriage that’s turning back into a pumpkin.

“Cinderella” is a timeless story and this update doesn’t change that. This is still Rodgers and Hammerstein, it’s still a fairy tale and it’s definitely still a love story — we haven’t yet gotten away from the nauseating sentiments of “Do I Love You Because You’re Beautiful?”

It’s just a bit more accessible, a bit more relevant and a bit more responsible in its representation of women and girls and all that they can be and do. The Virginia Rep production is a lovely, family-friendly event. Bring your daughters and granddaughters.