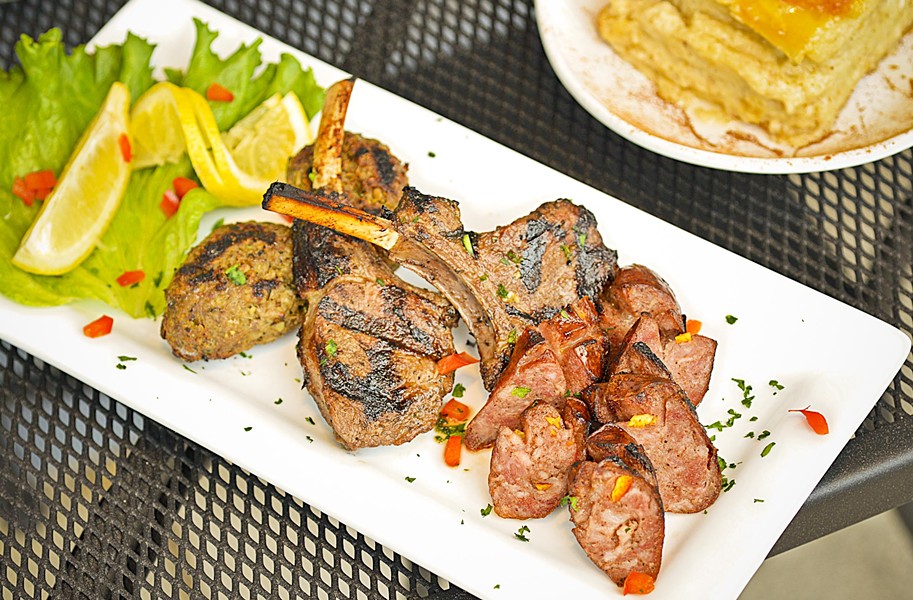 Ash Daniel The mixed grill appetizer at the Omega Grecian Grill is among one of the restaurant’s standouts.

Read food articles, talk to chefs or sit down to a just-from-the farm meal. While many factors make up a memorable dining experience, proper ingredients are paramount. A fresh herb will fare better than dried. In-season vegetables kick out-of-season bums every time. Grass-fed beef is "meatier" than its less sophisticated counterparts.

If Omega Grecian Grill added a few more of any of these to its lengthy Greek-influenced repertoire, the North Side would have lots more people getting themselves to the Greek.

On a quiet Friday night, two servers sitting in the back booth and a couple of cooks standing ready in the kitchen are a bit startled, but adorably so, by our arrival. We have the run of the place and service is exemplary. Three menus are delivered with water, warm crusty bread, and olive oil overwhelmed with dried herbs. The specials are explained in great detail on the menu, but the server adds a few oohs and ahs for effect.

Saganaki, traditionally pan-fried cheese, consists of two lightly fried slices of cheese. They're liberally dusted with dried herbs and coated in lemon juice but offer no flaming fanfare. In an oil bath, it's subpar compared with the mixed grill appetizer ($10.95). Haphazardly piled spiced sausage, marinated lamb chops and keftides are a combination of unexpected flavors.

The sliced sausage, loukanika, is dotted with orange zest, caramelized where the sides have hit the pan. Lamb chops, described as riblets on the menu, are tender from a sweet marinade. They have practiced grill marks and are nicely done. The forerunner, the delicate meatball, is springy and tangy. With a little better meat, each one of these would be exceptional and warrant a higher price tag.

A special of veal scaloppine ($14.95) is attractive on paper but oddly executed. A sweet mushroom and onion sauce seems to sport canned mushrooms. Veal, instead of a thin slice, is chunky and somehow squishy. The overall texture when mixed with the accompanying overcooked orzo is a little off-putting when the potential is so apparent. Sliced lamb in the souvlakia pita ($11.25) is on the tougher side, and after the sticker shock wears off is a setback even when mixed with salty feta and bright tzatziki. Side dishes include tired green beans with tomatoes ($3.25) overshadowed by more dried herbs, and surprisingly crispy and fresh french fries ($1.75).

On another night we go more traditional, which results in pleasing rewards. Moussaka ($10.95) is intricately spiced, each bite radiating allspice and clove. A thick béchamel sits on top and adds creamy depth. Lackluster ingredients are still apparent, however, with the eggplant fibrous and the potato a bit mealy. Pastiche ($10.95) is equally nuanced in flavor with the same hearty roux enveloping tube noodles, but it suffers from second-class beef and pasta.

Galaktoboureko ($4.75) is the highlight of the evening, prompting a second piece to go — an absolute steal for less than $5. Instead of traditional semolina, Omega's version is a hefty farina custard with a tight wrap of phyllo dough. The entirety is lightly covered in honey. Painstakingly constructed, a large square is devoured easily.

Even though there are some humps in the kitchen, service never flounders. Ebullient at each table touch, our server turns a questionable meal into a pleasant experience with attempts to engage yet be discreet. All evidence supports that quality talent is at Omega — cooking, hosting and serving. If the ingredients can match up to the aptitude, this would be more than a passable dining experience, it would be an unforgettable one. S