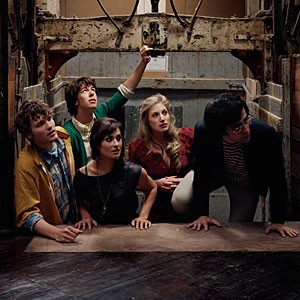 With irresistible hooks and alluring strings, New York chamber rockers Ra Ra Riot are more likely to incite a gyrating flash mob than disorderly conduct. Their sophomore album, “The Orchard,” prompted critics to gush and rightfully drew a fair share of Vampire Weekend comparisons. Founding member and guitarist Milo Bonacci confirms that just two albums into their careers, this joyous little band is still finding its sonic niche and has no problem admitting to the pitfalls of the curious moniker. Ra Ra Riot comes to Charlottesville's Jefferson Theater on Friday night.

Style:  Some guy recently tweeted that you have a dumb band name. Has anyone in the band responded to him yet?

Milo Bonacci: Ha. I don't know if anyone responded directly. I think it acknowledges that sort of criticism exists. I don't think there's any point in denying it (laughs). It's funny.

The name was really just intended to be temporary, right? Kind of a place holder until something better came along?

You guys are playing Charlottesville on March 4. Have you played this area before?

It'll be our first time playing there. I think we've only played in Virginia once, which is surprising to me actually.

Do you usually get a chance to check out the towns you are playing?

We usually see what the city has to offer in the way of food. That's one of the main things we get to look forward to every day. That sounds so boring.

I've seen some clips online where you all played acoustic and the strings just sounded incredible. Will you be doing any of that out on this tour?

Usually that's only done for radio performances or that sort of thing. When we're out on tour, it's the full band setup for the show.

Ra Ra Riot is pretty high-energy on stage. How do you prep for a show?

We'll work on the set list, but other than that it's pretty low key up until the time we go on stage.

No preshow antics or copious amounts of hard liquor?

Nah, not so much.

What's the key to a good gig?

For me it's all about the interaction with the audience and whether or not there's some sort of exchange. A bad gig would be where the crowd is indifferent. Getting a reaction builds the excitement for us.

What shows or bands have really impacted the way you play live?

Recently, we've been on tour with a band from Lafayette, the Givers. They are really fun to watch every night. It reminds me of what we were like when we first started. It's nice to see that amount of energy and enthusiasm.

Speaking of inspiration, everyone is really celebrating the Arcade Fire's Grammy victory. Is that the sort of thing that inspires independent bands like Ra Ra Riot?

Yeah, on some level. It's reassuring that there are bands out there making great music and getting recognized.

It's only been a year since “The Orchard” was released, but is there anything else new in the works?

Nothing has materialized just yet. We've just started thinking about the next album and recording, but we don't really have anything planned.

How is Ra Ra Riot evolving?

I think it's tough to say since we only have two records out. You might say we're changing the way we write songs. Inspiration is coming from different places.

Is there anything you guys wouldn't try musically?

I think we would consider anything if it felt right. As long as it's satisfying and fun for us.

What's something you hope everyone takes away from your gig at the Jefferson Theater?

Fond memories. (Laughs)  That's pretty much what we're striving for every night.

Ra Ra Riot will perform at the Jefferson Theater in Charlottesville on March 4. Show time 8 p.m. Tickets $13-$15. For information, go to http://www.jeffersontheater.com.