Not Proud to be Black 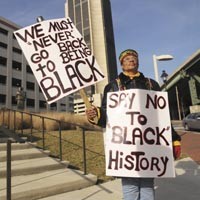 Don't call it a black thing — because it's not, says Shirley A. Jackson, one very frustrated African-American retiree who's celebrating her heritage this month by taking up a decades-old semantics issue.

A frustrated Jackson says she'll be protesting the use of the terms “black” and “Black History” for the whole of February, which is Black History Month.

“I am proud to be African-American, I am not proud to be black,” says Jackson, 65, who last week took up a sentinel's post at the corner of Main and 15th streets in the twin shadows of the slavery reconciliation statue and Club Velvet's Shockoe ballpark protest banners. “When people call people black, they do it to degrade you,” she says. “Black as a color always talks about something that's evil. It's a line of separation between black and white. It's degrading.”