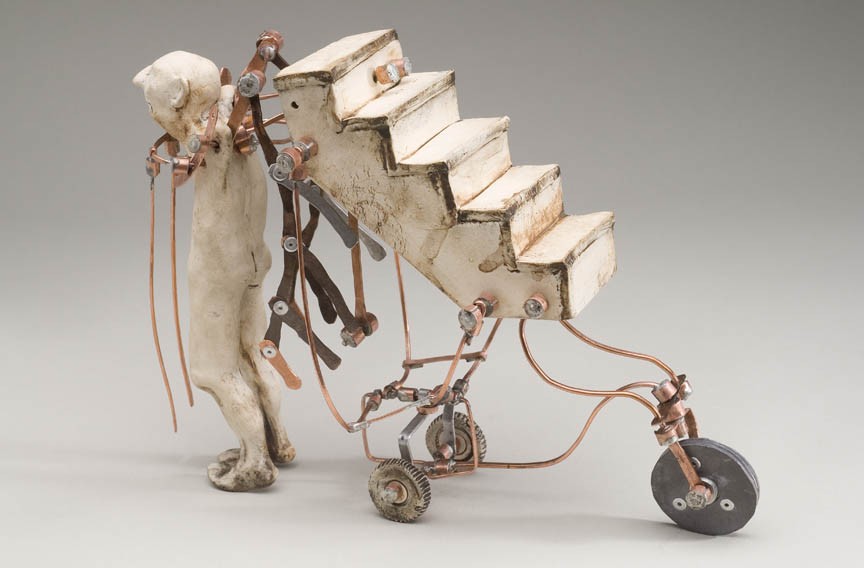 Upon visiting the exhibition "Aggie Zed: Keeper's Keep" at the Visual Arts Center, I unexpectedly walk in on a classroom of rambunctious kids. This seems fitting, because my understanding of Zed's work is couched within a context of childhood, whimsical narratives and poetic poignancy. That's partly because of the inescapable reference the sculptures have to Alexander Calder's metal toy circuses, which he performed for close family and friends.

I'm drawn to the small ceramic and metal objects, what Zed calls "scrap floats." Though physically dwarfed by the larger paintings, which hang around the perimeter of the room, the sculptures activate the space in a way the paintings don't. Assembled on waist-level shelves and wide pedestals, the scrap floats feature ceramic male figures, horses, coyotes, elephants or fish — both winged and not — suspended, encased or operating copper, machinelike armatures. At times it's unclear where machine ends and figure begins.

With their miniature-soldered bolts, lifelike ceramic wheels and intricately arranged metal frames, it's easy to imagine each kinetic object frozen in place, waiting to be activated. Narrative lends itself naturally as well. "Fully-Funded Rover" (2011), an amalgamated bird-machine-man perched atop a flight of stairs leading nowhere, seems both helpless and hopeful. Are the wings at his feet ones he has discarded in order to fly away? Or has he become distracted by the painting and trapped at the top of the stairs? Do the wheels allow him to move forward or do they keep him spinning in circles?

Zed acknowledges this feeling of sorrow and longing within her work in a short film produced by the Halsey Institute of Contemporary Art at the College of Charleston, which accompanies the exhibition. The South Carolina native claims her sculptures have a dark humor — under the broader heading of what she refers to as a Southern thing, akin to that found in the stories of Flannery O'Conner.

Like O'Conner, who frequently created physically disfigured characters, Zed's figures exist on the fringes of the grotesque and the absurd. In O'Conner's writing, the deformed characters force the reader to find good amid those unwanted by society. Such implications apply to Zed's sculptures as well. We might call them a form of redemption — an action of saving from something. From our stereotypes. From our inability to see past deformities. Perhaps saving us from our failure to accept.

Maybe this redeeming quality is indeed a Southern thing, an ability to showcase the absurd in order to question the status quo and rethink accepted norms. Recently I read an article about Southern contemporary art. The author says that it's just now beginning to catch up to art being exhibited in New York or London. The implication being that art made in the South — with a Southern sensibility — somehow lags behind that of more mature work made elsewhere. Only by mimicking these art forms, such as performance or community-based engagements, might Southern artists hope to amend the situation.

For that writer, Southern art is akin to a four-letter word. But Zed's sculptures reclaim it as something positive. Because for Zed, a Southern thing is a way of thinking about art that encourages and allows for dialogue that points to the human condition. It highlights the strangeness of life. It reminds us of those things we want to forget. And it allows for redemption.

In a deceptively small sculpture, "Another Heaven" (2011), Zed places a ceramic, winged elephant on top of a copper machinelike apparatus with three wheels. On the back is a crank mechanism. At first glance, it seems like the elephant might take flight. But on closer inspection, it's clear he can't fly because a weight has replaced one wheel. Paradoxically stuck between flight and restriction, the elephant exists between two worlds, held by a small weight. But he just might break free. S