This phrase, with varying levels of optimism, is heard no fewer than half a dozen times on Saturday as thousands of people make their way across the lawn and hunker down on risers in front of the Virginia State Capitol, eying the clouds overheard warily.

I didn’t attend Terry McAuliffe’s ceremony four years ago, but it wasn’t lost on me that extreme weather seems to be a theme when it comes to the inauguration of Virginia governors. Relentless rain dumped on the crowd in 2014, and on Saturday the temperature plummets to the low 40s, reminding us all that, despite the balmy 60-degree Friday we’d all enjoyed, it still was January in Virginia. Even so, spirits are high as McAuliffe hands the reins over to the state’s 73rd governor, fellow Democrat Ralph Northam.

The ceremony begins with the usual pomp and circumstance, presented by diverse and well-received groups: Richmond’s own gospel legend Larry Bland and the Volunteer Choir performs “America the Beautiful,” as representatives of the Boy Scouts and Girl Scouts of the All Dulles Area Muslim Society lead the audience in the Pledge of Allegiance. Keith Ball, of Grove Baptist Church in Portsmouth, takes the podium to sing the national anthem. The swearing-in process is short and sweet, with Northam, Lt Gov. Justin Fairfax and Attorney General Mark Herring taking their oaths from retired judges Glen A. Tyler, Gerald Bruce Lee and Thomas D. Horne, respectively.

After the governor’s salute by the Virginia Army National Guard comes what most everyone in attendance is waiting for: the inaugural address. Only a few minutes into his term, Northam dives right in with a reminder that Virginia has a “complex” history.

“In a church on a hill 15 blocks from here, Virginia’s first elected governor helped launch the American Revolution when he cried ‘Give me liberty or give me death,’” Northam says. “When at the bottom of that same hill, one of the country’s largest slave-trading markets was coming to life. A place where Virginians would sell men, women, and children for profit.”

Northam, who grew up on the Eastern Shore, goes on to tell a story about the rowboat he built behind his childhood home, and the advice his father gave him to always “trust your compass.” Cliched or not, the compass metaphor is well-received by the crowd, and it dovetails smoothly into a thinly -- or not at all -- veiled statement about President Donald Trump and his administration: “Virginia and this country need that more than ever these days. It can be hard to find our way in a time when there’s so much shouting, when nasty, shallow tweets take the place of honest debate, and when scoring political points get in the way of dealing with real problems,” he says with aplomb. “If you’ve felt that way, I want you to listen to me right now. We are bigger than this. We all have a moral compass deep in our hearts and it’s time to summon it again because we have a lot of work to do.”

Following Northam’s address -- which several attendees in my section fervently agree was one of, if not the, best they’d ever heard -- and the benediction read by Rabbi Michael Knopf of Temple Beth-El, the crowd watches in reverence as about a dozen representatives from Virginia’s Indian tribes arrived in front of the Capitol to perform a “blessing of the ground” ceremony. Once the drumbeats cease and the inaugural parade is introduced, attendees’ attention spans and tolerance for the cold begin to wane and the stands quickly clear out. As the crowd disperses, Northam, Fairfax and Herring wave enthusiastically to each passing parade participant, undeterred by the cold. Still, let’s not forget, those sitting on the Capitol steps had heated seats.

Among the droves of black and gray coats milling around after the ceremony, a group of bright red hats stood out in the crowd. And no, not the “Make America Great Again” caps -- these hats feature the logo of Moms Demand Action, a national organization that advocates for gun control and against gun violence. Mary Wright Baylor, an active member of the Burke chapter of the group, traveled from Northern Virginia with her husband to brave the cold and witness Northam’s oath of office.

“He is such a gun-sense champion for us,” Baylor says. “I’m a nurse, and Dr. Northam, Governor Northam, and I spoke almost a year ago about gun violence as a public health problem, and it was about the third thing he mentioned in his inaugural address.”

During his address, Northam states that gunshots kill more people in Virginia every year than car accidents, but “if you walk into the right gun show, it’s easier to get a firearm than it is to rent a car.” To great applause, he promises that he will “work with you to make Virginia safer by passing smart reforms that keep guns away from people who shouldn’t have them.”

Baylor says she hopes to see some “good bills through the General Assembly” in the next four years, and universal background checks would be “a great start.”

“To hear it in the inaugural address really gave me hope that Virginia can make some progress in making this commonwealth safer for everyone,” she says. “We could not be more proud to have been part of the many groups that worked hard to elect this amazing man and his administration. It’s a great day for Virginia.” 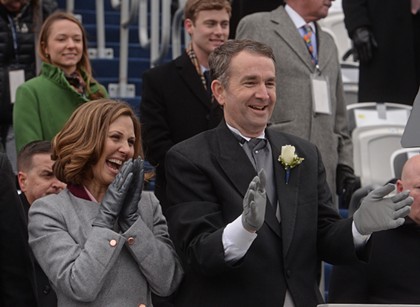 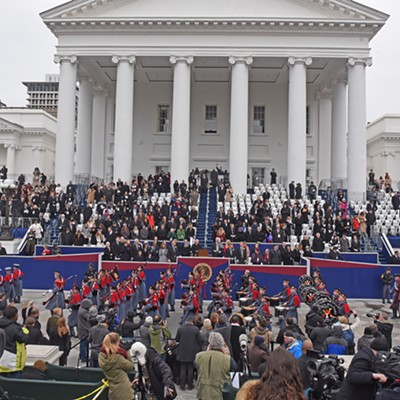