How to enjoy your hometown from now till Labor Day — and plan an easy weekend getaway to the most direct destinations.

There's no place like home. Even when you're sweating through your eyeballs.

In Richmond, you can find thousands of ways to enjoy your summer months. Baseball games, river events, music, culture and dining — as if to spite the humidity, Richmond rises to meet the challenge.

On the following pages we share some of the summer events that stand out, a variety of items to keep in mind for your long-term planning. As always, you can find event ideas every week in Style. And it never hurts to pick something new, go for the obscure and explore an area of the city you don't normally encounter.

Speaking of exploration, Richmond's airport also makes it easy for an out-of-town escape. The summer's new star is Nashville. Starting this week, you can get a direct flight on Allegiant, which begins twice-weekly flights from Thursdays to Sundays.

"That has been a very popular announcement," airport spokesman Troy Bell says.

And nonstop flights make life easier, especially if you want a long weekend somewhere new. So we've picked five direct flights and what you can do once you land to expand your summer: Boston, Denver, Minneapolis, Dallas and boarding now, Nashville.

Bell recommends that you be in the terminal, checked-in, at least 90 minutes prior to departure.

Once you're in the air, sit back, relax and watch Richmond grow tiny. You'll be back soon enough. — Jason Roop

Travel tips: Probably gone, but worth a shot: Last week, a $68 round trip price was in effect if you leave Sunday, July 1, and return Thursday, July 5. Other deals included four-day trips leaving Sunday this summer.

The pitch: Music City, and "we live up to that name!" says Allison Duke of the Nashville Convention and Visitors Corp. It's OK to head away from the beach in the summer. Nashville will give you waves of live music, every day, with more than 180 music venues.

Ideas: Duke suggests a night along Lower Broadway, where Honky Tonk Highway is open from 10 a.m. to 3 a.m. daily, with no covers. And now Third Man Records, owned by Jack White, is open for paid tours on Fridays and Saturdays.

Events: If you can book that steal of a July Fourth flight, Nashville holds the largest fireworks show in the country downtown, Let Freedom Sing! Music City July 4th, with big-name music acts and the Nashville Symphony.

Dining: Eater is out this month with its hottest restaurants in Nashville right now. Its top three are Folk, Kuchnia and Keller and Geist.

Travel tips: It's the No. 9 destination from Richmond "and climbing," the airport's Bell says. And starting this month, United increases its frequency, he says: "It's actually the first time we'll see twice daily to Denver."

The pitch: The Mile High City, "where 300 days of sunshine, a thriving cultural scene, diverse neighborhoods, and natural beauty combine for the world's most spectacular playground." For fans of "Top Chef," check out what you saw last season.

Ideas: A lot of folks are interested in trying out the legal-marijuana scene. But the state reminds you that it it's not a free-for-all. You must be 21, may purchase as much as an ounce at licensed retail stores, and consume it in spots "not open or accessible to the public."

Events: The Colorado Shakespeare Festival, which runs through Aug. 12, is in its 61st year, making it the second-oldest such festival in the country. It's theater under the stars. The popular South Platte Riverfest is June 23. The Rocky Mountain Regional Gay Rodeo is July 6-8 at the Jefferson County Fairgrounds. And a four-day festival over Labor Day weekend, a Taste of Colorado, draws more than half a million people each year.

Dining: From Eater Denver, a few popular spots to try include the Wayback, Dead Battery Club and Lou's Hot Naked. 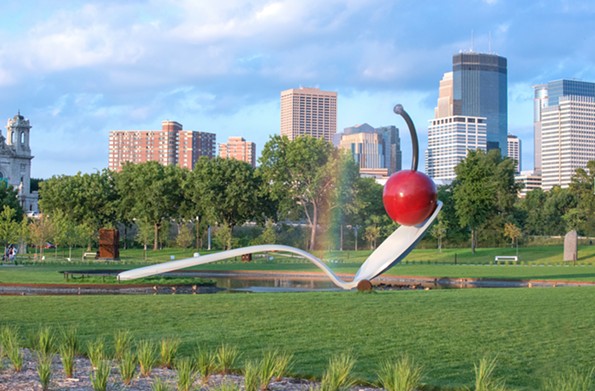 The pitch: "City by Nature." Summer is green and lush, says Kristen Montag of the Meet Minneapolis Convention and Visitors Association. There are 22 lakes and 197 parks within city limits, she says: "We talk a lot about the urban amenities alongside being in the middle of a big park."

Ideas: "Generally people find it to be a larger city than they're expecting," Montag says. If you like outdoor adventures, check out the kayak-sharing program or one of the biggest bike-sharing programs in the country with more than 200 miles of trails. Day trips could include Duluth, Red Wing, Lanesboro or Stillwater on the St. Croix River.

Events: One of downtown's biggest events is the Twin Cities Pride Festival, June 23-24. Montag says the Aquatennial, held July 18-21, has been going on 70 years and includes a festival and a huge fireworks show — plus, the X Games Minneapolis are happening the same weekend. The Uptown Art Fair is Aug. 3-5, overlapping the Powderhorn Art Fair, Aug. 4-5.

Dining: Mpls.St.Paul Magazine is out with its best restaurants issue. A few suggestions include Lexington, Bellecour, Zen Box, Martina and Kenwood.

Ideas: If you're ready for a break from craft beer or wine tours, Zane Harrington of VisitDallas recommends the new Margarita Mile, launched in time for summer. The frozen margarita machine now in the Smithsonian was invented here in 1971. It includes an array of margaritas to try at diverse locations across Dallas. There's even an app. For information visit MargaritaMileDallas.com.

Events: Sample from 50 restaurants and food trucks at the Taste of Dallas, June 22-24 at Gas Monkey Live. Want to escape the bigness of the city? Try a day trip to the Parker County Peach Festival in Weatherford on July 14. Rockin' the River is a free Saturday tubing and music series at Panther Island Pavilion, billed as the state's only waterfront stage.

Dining: Eater suggests Fachini, Smithy, Perle on Maple and Foxyco Dallas. As for barbecue? You'll find plenty. A fifth of the best joints in the state are in the Dallas-Fort Worth area, Texas Monthly says. Check out Pecan Lodge or Cattleack Barbecue.

Travel tips: It's the top destination from Richmond — an easy flight with lots of competition. With JetBlue, you get four flights a day, Bell says, with Delta offering three flights a day.

The pitch: "Grounded in History, a Hub of Innovation."

Tourist bucket list: Beacon Hill, Fenway Park, a side trip to Cambridge, and the bar where no one will know your name but that's OK: Cheers.

Ideas: Sign up for a tour of the Freedom Trail, which takes you through neighborhoods and includes 17 sites that help tell the story of the American Revolution.

Events: The days surrounding the Fourth of July comprise a big season here, with the Boston Harborfest, Boston Pops Fireworks Spectacular and a reading of the Declaration of Independence. Special restaurant weeks, Dine Out Boston, run Aug. 5-10 and Aug. 12-17. The Puerto Rican Festival, a three-day event, runs July 27-29.

Dining: A few of the hottest Boston restaurants, according to Zagat, are Fat Baby, Island Fried, the White Bull Tavern, Our Fathers and Tiki Rock.