Nonprofit Tears Down Shockoe Building After Years of Neglect 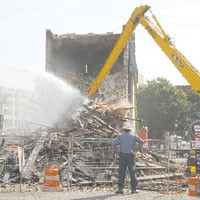 The Council for America's First Freedom was ordered to demolish a historic building after failing to comply with previous instructions to prevent its deterioration.
The First Freedom Council owns the parking lot at the corner of 14th and Cary streets where the Virginia legislature passed the country's first religious-freedom statute more than 200 years ago. After more than 20 years of fits and starts, the nonprofit announced plans in early October to build two Marriott-branded hotels and a monument on the site.

Developing the property had always raised questions about the fate of the Liberty Press building, an 1870s structure that received an Art Deco facelift in 1929 and, until about three weeks ago, stood on the lot.

While reviewing an earlier proposal in 2004, the city's Architectural Review Commission decided that when and if the First Freedom Council secured funds for the development and applied for a building permit, the Liberty Press building could come down. In the meantime, the board asked that the building be stabilized “to prevent any further physical deterioration,” specifically warning against water damage.

It appears that the nonprofit never stabilized the building, however. In September, four years after the commission's review, an engineer informed Baskervill & Son, the architectural firm working on the project, that “the interior of the building had been ravaged by water infiltration … so severe as to render the building structurally unstable and, in my opinion, a safety hazard to the surrounding area.”

City building commissioner Art Dahlberg condemned the building Oct. 2, citing several code violations. It was demolished nine days later.
The First Freedom Council declined to comment directly, but forwarded a press statement: “The Council regrets that it was unable to save the building, but the City determined that it was a safety hazard and ordered the demolition.”

David Johannas, who assumed chairmanship of the architectural-review committee this fall, says “it certainly looks likes demolition by neglect.”
David Herring, president of the preservationist group ACORN, says he's concerned that the building came down before the Architectural Review Commission had a chance to vet the new plans for the site, but is otherwise supportive of the project.

“It's a little bit the cart before the horse,” he says, “but ultimately I think it's going to be a good project.”