Seattle's Cute Lepers leaps forward into the past. 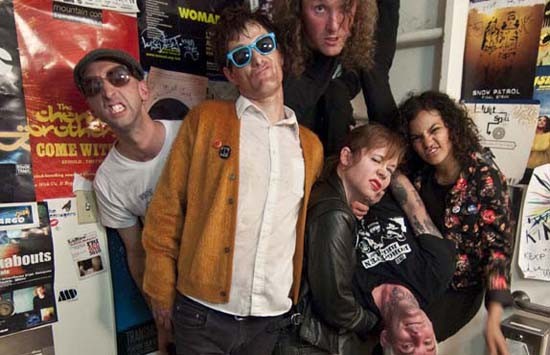 The leader of Cute Lepers is the first to agree: His band's name totally sucks.

"I had friends begging me, 'Please don't call yourselves that,'" lead singer and songwriter Steve E. Nix says via telephone from the group's home base in Seattle. "But it was either Cute Lepers or the Drowned Rats."

Having an off-the-wall name has its advantages, Nix maintains: "If you Google 'Cute Lepers,' you certainly won't find anything else."

And when you play the band's latest CD, "Adventure Time," you'll find unique tones, at least for this millennium. The Lepers are proud that their music sounds nothing like (Nix's term) "today's boring shoe-gazer indie rock" — the group's 2007 debut disc was even called "Can't Stand Modern Music." Instead, the band deftly emulates the propulsive sound of early new wave and punk groups such as the Buzzcocks and the Damned. "There were so many great one-hit wonder bands from 1978," Nix says. "That time is still an amazing source of inspiration to us."

Their reverence, or irreverence, extends to the nonmusical side of those pioneering groups. Nix declines to reveal his real name, saying that his jokey pseudonym is a homage to original punk pioneers like the Damned's Rat Scabies and X-Ray Spex's Poly Styrene.

Studded with standouts tracks such as "Noisy Song" and the infectious title cut, the band's third release, "Adventure Time" (on 1-2-3-4 Go Records) is a small masterpiece of startling — and pleasingly melodic — guitar-based rock 'n' roll. The Lepers' story began when Nix's former punk rock band, the Briefs, took a hiatus. Along with Briefs bassist Stevie Kicks, he set out to form another group, one that was less hardcore and more centered on "power pop and Stones-y rock 'n' roll."

The group survived a terrible setback in 2009 when guitarist Travis Criscola died of a methadone overdose following a Cincinnati gig. "It was an accident," Nix says, looking back. "He was only in the band for four and a half months, was in his early 20s and touring for the first time. He just didn't know what he was doing." Nix says he's relieved that the incident didn't pigeonhole the group. "I don't have druggies in my band," he says adamantly. "I don't even drink."

The Lepers' current six-week U.S. tour will take them to two Richmond venues, Steady Sounds and the Hospital, on Sept. 4. "We don't make much money from U.S. tours," Nix acknowledges. "We seem to do better in Europe; we just got back from there. Maybe it's the music we play but we seem to go over well in the U.K. They don't seem to be as obsessed with video games and reality TV there. ... They still go out to shows."

At 41, the touring veteran still enjoys the rock 'n' roll lifestyle, he says — "punk rock keeps you young." But with their small budget, his Lepers rarely stay in hotels, preferring to crash on the floors of accommodating fans. "We've turned people down, though," Nix says, laughing. "I'm older. I have standards now." S