Three local art shows shows aim to stand out with provocative work during the holiday season.

Art waits for no season. While it may seem like a miasma of holiday activities reigns through the end of the year, a trio of galleries hopes to shine through, piquing your interest with provocative shows to lure you away from familial or other obligations.

Staunton artist Robert Stuart shifted his focus from representational to abstract after a friend's comment that his works looked like they were created by an abstract painter who took his easel outside. Directly after returning from a trip to Japan touring Zen Buddhist temples and gardens, he had a clear dream of a large, red abstract painting with white lines. It was unusually vivid, causing him to set out to execute it immediately. The resulting piece felt so right that representation went out the window.

Inspired by both natural and manmade sources, Stuart's "Radiance" show pushes the dramatic sense of radiating light by juxtaposing it with rich, dark bands of color. Think beams of sunlight through a cracked door or light illuminating the edges of the sky. "The subject matter is what the artist brings to the work, what makes it his or her own, makes it distinct," Stuart says. "It's the artist's voice." Like music, it's the kind of imagery that viewers are likely to instinctively react to without knowing why.

Full of luscious shades of color and collagelike overlap of forms and figures, Jeanie Keys' "Out of Sight" show seeks to express the artist's mood. A recent transplant from Northern Virginia, Keys fell in love with the eclectic, creative community she found in Richmond. After years as a commercially successful watercolorist working with Nordstrom to sell reproductions of her work and exhibiting originals in galleries, she concluded that titling her work was her least favorite part of the creative process.

"Why do we need to have everything explained, labeled and defined in words to understand what we're supposed to feel when we look on something another has created?" Keys asks. "Why can't we just give the viewer credit for being able to interpret, with their own senses, what their feelings are? I have no interest in explaining what I painted."

Her recent work eschews naturalistic colors and shapes, conveying sensation before likeness. There are no wrong answers when considering Keys' paintings and ceramics, because each work is untitled to leave the viewer free to interpret. And Oprah gets it — she has one in her private collection.

Brought together by photographer, editor and publisher Russell Joslin, who's been collaborating with an array of photographers during the past 15 years as publisher of the photography magazine Shots, "Black Forest" is a re-contextualization of disparate photographers' images to create surreal "visible poems." 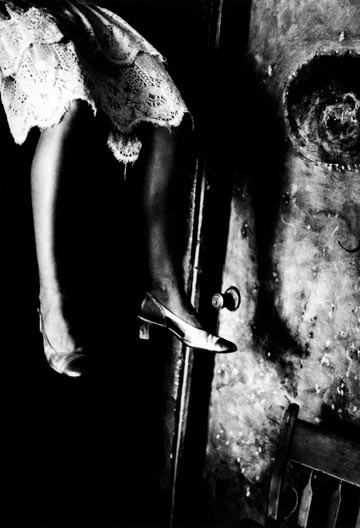 Now it's both a book, published by Candela Books and Gallery, and an exhibit of some of the photographs. The exhibit features 28 images from the book, and the nod to surrealism can't be missed. In one, a snake lies coiled around a woman's neck, its head resting on her eyes and nose. In another, a woman wearing only sunglasses, a scarf and shoes sits on a chair inside a massive cobweb, the sunlight from a nearby window illuminating her nude body. A woman's legs dangle in midair, her upper body out of the frame and her shoes reaching only doorknob height. Are such odd scenes disturbing or merely unusual? Certainly the viewer senses the hand of the photographer in each carefully constructed tableau.

"I was really excited to get to work with some of these international artists," says photographer Gordon Stettinius, founder of Candela. "We're thrilled to be sharing work from the likes of Jane Evelyn Atwood, Roger Ballen, Arthur Tress, Debbie Fleming Caffery, Kahn and Selesnick and so many other notable photographers.

"I haven't attempted to recreate the narratives from the book, but there is a dark and beautiful and strange tone to the collection we have in the gallery." S