Former employees of CBS-6 create a film exploring mental health through the lens of the black community. 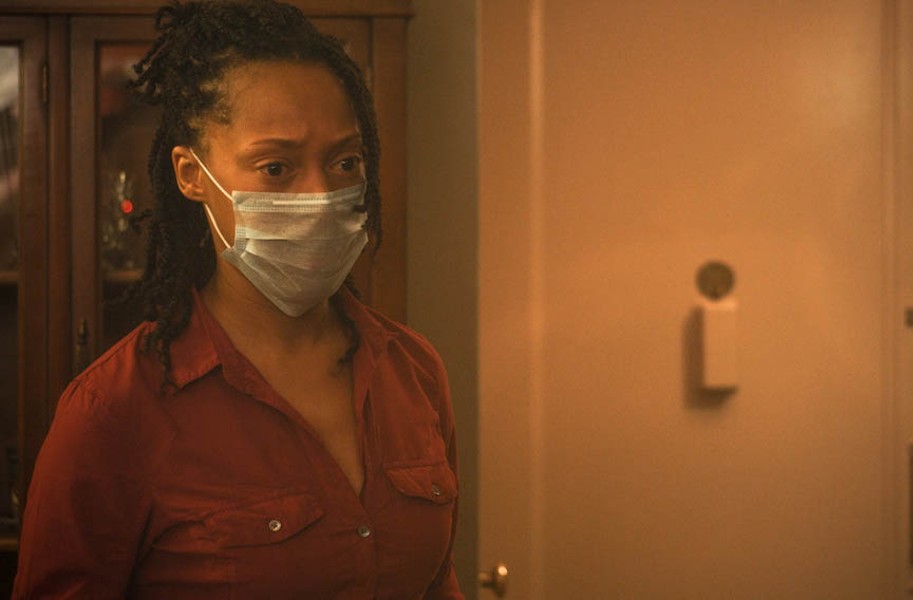 Actress Cherise Boothe plays Jade, a woman who has become a shut-in thanks to her obsessive-compulsive disorder and mysophobia in the new film “Contamination” by a group of former WTVR employees.

Her apartment-door buzzer rings. Her heart pounds audibly. Donning a medical mask and disposable gloves, she peers through the peephole, but no one's there. Cautiously, she swings opens the door, her sheer terror visible, the hallways bending and twisting with her anxiety. A UPS package sits ominously on her threshold. She reels it in at arm's length with a plastic umbrella, breathlessly slamming the door shut and sobbing from the effort.

A scene from a medical thriller? A zombie flick? The short film "Contamination" may be inspired by the visual language of Hitchcock thrillers and horror movies, but it deals with the down-to-earth problems of mental illness — in this case an attractive, young black woman named Jade who's become a shut-in because of her obsessive compulsive disorder and fear of germs.

"Contamination" — starring Cherise Boothe ("42") and Ami Brabson ("Law & Order: Special Victims Unit" and "Homicide: Life on the Street" — is the brainchild of writer and director R. Shanea Williams, 34, a former floor director for WTVR-TV 6's "News at Noon" and Virginia Lottery broadcasts. The film has been accepted into the Martha's Vineyard African-American Film Festival, the Black Harvest International Film Festival and the Reel Sisters of the Diaspora Film Festival.

"Mental illness is a difficult subject," says Williams, a graduate of Petersburg High School and the University of Virginia. "Particularly in the African-American community, there is a lot of shame associated with it. That's why I thought it was so important for this character to be an African-American woman dealing with this. It's something you just don't see in cinema. I know there are people suffering so I felt like this was a way to bring a voice."

Williams now lives in New York, where she earned a master's degree in screenwriting and won a graduate excellence in screenwriting award from New York University in 2008. The film's producer, Anthony Davis, 39, is a Henrico County native and Hermitage High School graduate who worked alongside Williams as first associate producer on CBS-6's "Virginia This Morning" in the mid-2000s. Based in Atlanta, he now works as an assistant production accountant on such big-budget feature films as the upcoming "The Hunger Games: Mockingjay - Part 2" and Marvel's "Ant-Man."

"She's talented," Davis says of Williams. "She writes about stuff that nobody's talking about." Together they've formed a production company, Vision 75/80 Productions, and hope to make more short films as well as features.

Two more of their former station colleagues, Siobhan Fisher and Debbie Prata-Pitts, worked on the film as script supervisor and designer and props master, respectively.

Unfortunately, Hollywood doesn't usually produce movies that examine uncomfortable issues because they aren't seen as commercially viable, Davis says: "Nobody wants to see somebody going through a-mental health issue … but it's really educational for people who don't know what OCD is about. … A lot of African-Americans — and probably other Americans — they don't talk about [mental health problems] to other people. It's kind of hidden."

Williams has battled anxiety throughout her life, she says. "It's something I knew very closely and I knew other people who had battled anxiety and panic attacks," she says. "The subject matter is close to me and it's been amazing to see how many people have suffered in silence."

She hopes the film can show people like Jade that they aren't alone, and that "you can recover," she says. "I thought it was very important to show that … there is hope for people who are really suffering." S