We owe it to the children of Linwood Holton Elementary to remove the nearby monument to A.P. Hill, a Confederate general. 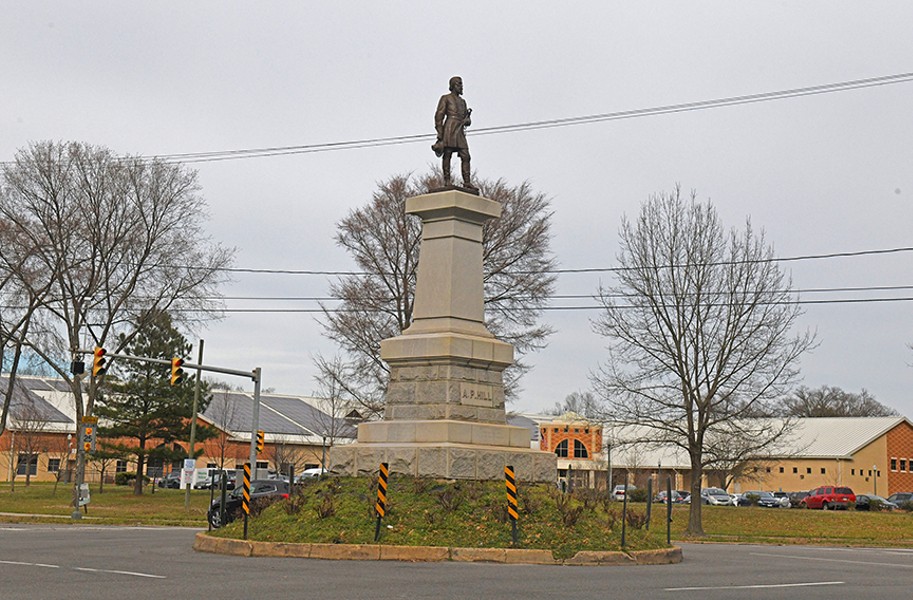 Linwood Holton Elementary School, at Hermitage Road and Laburnum Avenue, is named for one of our own 20th century civil rights heroes, who as governor of Virginia championed racial equality. The children who attend the school learn that they are a big part of Linwood Holton’s legacy.

Those same children who attend the school might very well wonder, though, “Who is that man whose statue is standing out there in the middle of the intersection?”

That would be A.P. Hill: the forgotten Confederate general and his monument.

Battles are being fought over Confederate monuments, here in Richmond on Monument Avenue of course, and at so many other sites around the country. Calls for memory and heritage clash with cries for truth and reconciliation. Words take on their own meaning and people take sides, with the monuments in the middle.

With so many battles raging, it is curious that one Confederate general and the monument dedicated to him remain relatively forgotten on the sideline, standing at an intersection not far from Monument Avenue and its pantheon of controversial figures. The A.P. Hill Monument is in a tight space that has shrunk over the years. It is known these days as a significant traffic hazard. Warning signs placed by the city encircle the monument, and it and its landscaping are poorly maintained to the point of neglect.

Of the monument, it can be said, “There stands A.P. Hill,” for he is in fact buried at the monument and he was buried standing upright. The lieutenant general had died in battle in the very last days of the Civil War on April 2, 1865. The monument marks his third resting place. He was moved to the present location from Hollywood Cemetery in 1891, and the monument was dedicated on May 30, 1892. The land for the monument was donated to the city by Lewis Ginter, who was at the time developing property in its North Side neighborhood. He had served under Hill during the war.

The day of the dedication of the monument came with great fanfare. The Lee Monument had been dedicated just two years before, and the A.P. Hill Monument was seen to be leading the way to further enshrinement of the Lost Cause narrative.

Reflecting on the significance of the unveiling of the A.P. Hill statue, the Richmond Dispatch, in its May 31,1892, edition, began with a prescient observation: “Richmond is a city of memories and it must also be a city of monuments; monuments which entwine our hearts with the past and pledge us to a patriotic future.”

The orator for the day, former Confederate Brig. Gen. James A. Walker, gave a lengthy speech that was a tribute to A.P. Hill, to be sure. But the speech was a tribute to Jefferson Davis, Robert E. Lee, Stonewall Jackson and A.P. Hill — in that order. There was already a larger sweep of remembrance. The Richmond Dispatch declared Walker’s address “a splendid vindication of the South’s love and reverence for her heroes.”

Over time, however, the remembrance of A.P. Hill faded. His daughter was known to complain that her father never got the credit that he deserved. In 1957, a biography by historian William W. Hassler was published with a title that spoke volumes: “A.P. Hill: Lee’s Forgotten General.” James Robertson sought to resurrect Hill’s memory in his 1992 biography, “General A.P. Hill: the Story of a Confederate Warrior.” Nonetheless, A. P. Hill has stayed behind, back from the battlefront over monuments, overshadowed by his legendary counterparts.

As reported in The Richmond Times-Dispatch, he did have a brief moment, though. In August 1966, the Planning Commission recommended that the A.P. Hill Monument be moved onto Monument Avenue. It would have been placed at Allison Avenue, to fill a perceived gap and keep the rhythm and balance of the Confederate monuments. But opposition to the change arose from North Side residents. A.P. Hill stayed where he was.

It’s ironic to stir the memory of A.P. Hill. But we need to understand what he stands for.

The A.P. Hill Monument cannot possibly be contextualized side-by-side with Linwood Holton Elementary School. We owe it to our children to take the steps necessary to remove it.

Mike Sarahan is a local writer and community volunteer. He can be contacted by email at michaelsarahan@gmail.com.