Controversial elm tree in the Fan roils neighbor after a giant limb crashes into the street. 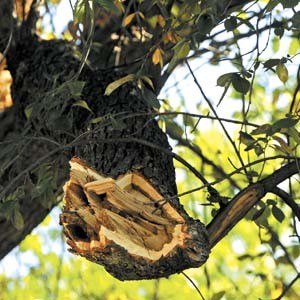 David Robinson knew it would happen someday — it was just a matter of time. While he worked a few blocks away at his accounting firm Oct. 5, a monstrous branch on the American elm tree adjacent to Robinson's house was clipped by a passing truck and tumbled to the street.

This is no ordinary elm. The 70-plus-year-old tree at Plum Street and Floyd Avenue has branched into full political drama. Robinson says the tree is infiltrating the foundation of his house, tripping pedestrians and posing an all-around safety hazard. His efforts to remove the tree span months of talks with city workers, squabbles with neighbors and a proposed-then-withdrawn city law by 2nd District Councilman Charles Samuels. There were separate assessments by a city arborist, an independent engineer and city lawmakers. Finally a compromise meant new bricks around the tree.

Robinson's trouble started with a policy that prohibits removing trees on city property without the approval from the municipal tree specialist.

Samuels' ordinance sought to circumvent this policy after arborist Luke McCall declared the American elm healthy; the following debate saw impassioned pleas from neighbors and prompted 5th District Councilman Marty Jewell to allude to the film “Nightmare on Elm Street” at a meeting.

Then, just a few months after the tree's life was spared, one of its large branches that towered above Plum Street fell off.

“Small amounts of ‘I-told-you-sos,'” Robinson says of the branch, which he alleges was hollow. “The city should take another look” at the tree's health, he says.

City spokeswoman Sharon North says McCall was at the recent removal of the branch from the street and that the city plans to remove a couple more branches after November, when the tree will be dormant and less susceptible to Dutch elm disease. “It's not a dead tree,” North says.