Nighthawks at the Diner 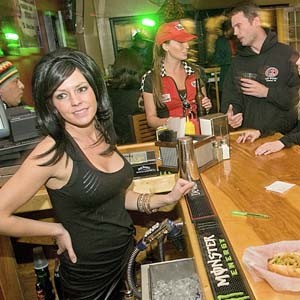 It's last call at Aurora Club, and dozens of men and scantily clad women take to the street. Loud music blares from the cars going by while a police cruiser rolls up to encourage the young partiers to get out of the middle of the street.

“Oh!” the crowd reacts when a man in a red polo beats on a cop before being slammed onto the hood of the cruiser. While the men grapple in the street and the officer's partner rushes in to help, another fight commences.

Two men duke it out and the masses swirl around them, blocking the intersection of Grace and Fourth streets. While roughly a dozen police cars descend on the scene, a number of questions spring to mind: What led to the brawl between the man and the cop? Why are these two other men fighting? And where can you get a bite to eat at this late hour?

3rd Street Diner runs around the clock, cooking up hot sandwiches and breakfast after hours. Though the past few years have seen a renovation from its familiar diner-style motif, the interesting regulars are still there. The service is just as slow, but much friendlier. The $6.95 chicken sandwich I order would be fine if it weren't for the cheap swiss cheese on top that make the sandwich inedible. 218 E. Main St., 788-4750.
The Pizza Place offers slices for $3 and stays open till 3 a.m. The pizza is undercooked, but has just the right amount of grease to soak up a night of gratuitous drinking. A man tries unsuccessfully to woo two Haitian women by convincing them that he too is Haitian. A bail bonds advertisement hangs from the counter with the slogan, “Putting Your Feet Back On The Street.” 1731 E. Main St., 343-1300.

City Dogs offers a mix of hot dogs and hamburgers until 3 a.m. on weekends. The $3.29 Manhattan dog has a flavorful mix of sauerkraut, onions and relish, though the combination might be rough on a booze-laden stomach. While the dogs are quite good, the group of Brits standing outside swears by the burgers. One of them recounts the night previous, where he was hanging out at a bar in Duck, N.C. Completely unprovoked, a local approaches him, saying, “I don't like you British liberals coming here.” Later, when the Brit is singing karaoke, the local has his music cut off. “Are you joking,” the Brit replies. “It's Bruce Springsteen!” Bar tales and dogs. 1316 E. Cary St., 343-3647 or 1309 W. Main St., 359-3647.

Country Style Donuts near the airport has earned a place of distinction among late-night eateries. Open 24 hours since 1968 (except for Mondays), this stop has perhaps the best doughnuts in the city. At 3:30 a.m. there are only a few of the 38 varieties left, but that's just because the next batch is being made. $4.99 for a half-dozen donuts. 4300 Williamsburg Road, 222-7466.

River City Diner plays host to a great late-night menu that runs until 3 a.m. on Fridays and Saturdays. From breakfast to burgers, this place knows how to keep the after-hours options open. Though the menu says there's a 20 percent markup after 11 p.m., my check doesn't reflect it. The River City red-eye is a hearty breakfast spread for $5.99, quite tasty even if the scrambled eggs could use a bit more flavor. The lady sitting next to me at the bar tells me about Irish car bomb cupcakes and of pouring beer on her Cheerios for breakfast. The waitress explains her irrational fear of mayonnaise while the cook starts bellowing Tears for Fears. A fight breaks out in front of the eatery next door. Two women get in each other's faces, a weave is pulled and a crowd gathers. And the cops rush in. 7 N. 17th St., 644-9418.