No zombies, no creepy clowns, no chain saw massacres. This is not that kind of haunted house.

For years, local horror aficionados Red Vein Army toured the commonwealth during October providing queue-line entertainment for other attractions as a way of building a reputation and establishing their own folklore. The tour's goal was to encourage people to visit Virginia's many Halloween events.

But last year, the group put down roots at Hanover Vegetable Farm and began crafting a different kind of haunted house.

"They approached us when we were looking for something like this," says farm manager Kevin Pond. "We'd talked about doing it for years, but we didn't want a 'kids in the woods chain saw' kind of a thing. We wanted exactly what they do. It's a complete story, and experiencing it is like a movie. There's something to it, and that makes it a hundred times better and scarier."

What sets Red Vein Haunted House apart from other Halloween attractions is the deep-rooted folklore they spent years establishing as they took bits of real stories and integrated them into their own. With a more theatrical bent and a focus on immersing guests into a darker and more sinister story, they sidestepped many modern day Halloween clichés. 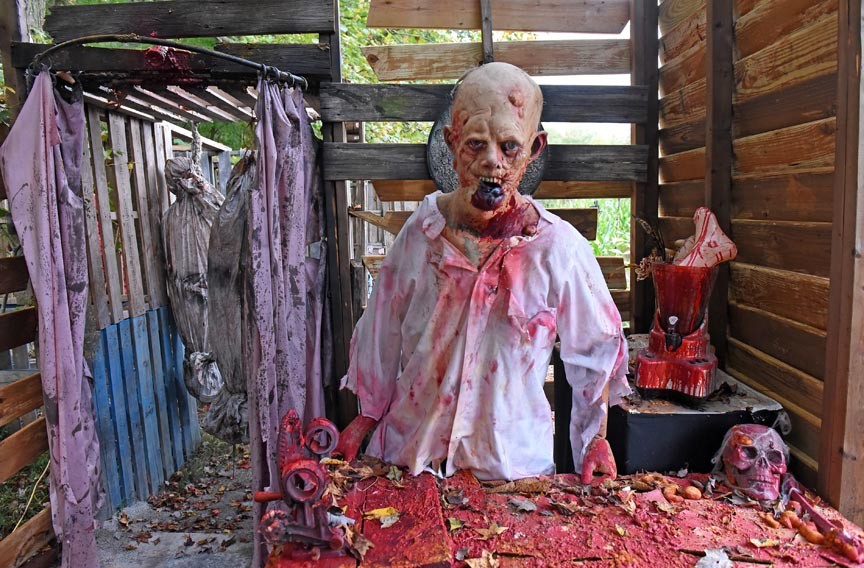 The haunt is comprised of two attractions, the cornfield — Rabbits Cry Field — and the house itself, the Providence Home for Wayward Children. This year's theme is Night of Samhain, and guests are invited to a dinner party in honor of the feared witch Emily Redvyn and her husband Thomas, who mysteriously disappeared on All Hallows' Eve.

Rabbits Cry Field is so named because legend has it that when witches feared being detected, they shape shifted into rabbits. Worried that Emily was going to do so, all the rabbits in Hanover County were slaughtered, accounting for the many rabbit pelts hung, with twig triangles representing the eye of providence. These comprise an early section of the field that is equal parts disturbing and folk-art installation.

This year's attraction is easily twice the size of last year's and continues the witch's story. Planning began in January, and the group has been steadily building since April with the building crew on site every night for three months. Meanwhile, the eerie array of portraits in the home was done by actor Stephanie Mayton.

Auditions were held to hire the 25 actors necessary to populate the attraction, some of whom have been with Red Vein Army since the queue-line days. Qualifications include a passion for Halloween and an abundance of energy.

"Haunt acting is not for everybody," says Ryan Sligh, originator of Red Vein Army. "You have to do the same thing hundreds of times in a night and improvise. Once you put on that costume, you become that character for the night."

Even the attraction's location outside the city is intentional. While it's technically not that far away — 10 minutes from Short Pump, 23 minutes from downtown — the drive into the country is intended to set the tone.

Before guests even get to the cornfield or house, they're invited to gather around the campfire for s'mores and the opportunity to read from Thomas Redvyn's recovered diary as a way of getting a glimpse of what may or may not happen at the dinner party. It's not required, although it does enhance understanding of what's about to unfold.

"This is not something for children," warns Kitty Barnes, who came on as outreach coordinator and, after months of wielding a sledgehammer, is now vice president of operations. "There are PG-13 elements because we don't hold back on the gore and scares. We won't grab you, but you might be grazed."

Just to add to the creepiness, on the far side of the field, through the crypt and past the coffins but before the crawl space, there is an actual cemetery for farm animals.

"This really was a horse cemetery, where this corn plot they planted for us is now" Barnes says. "But I don't know if they'll do that anymore now that we're here." S