The 2013 InLight installation looks for the poetry in transient art. 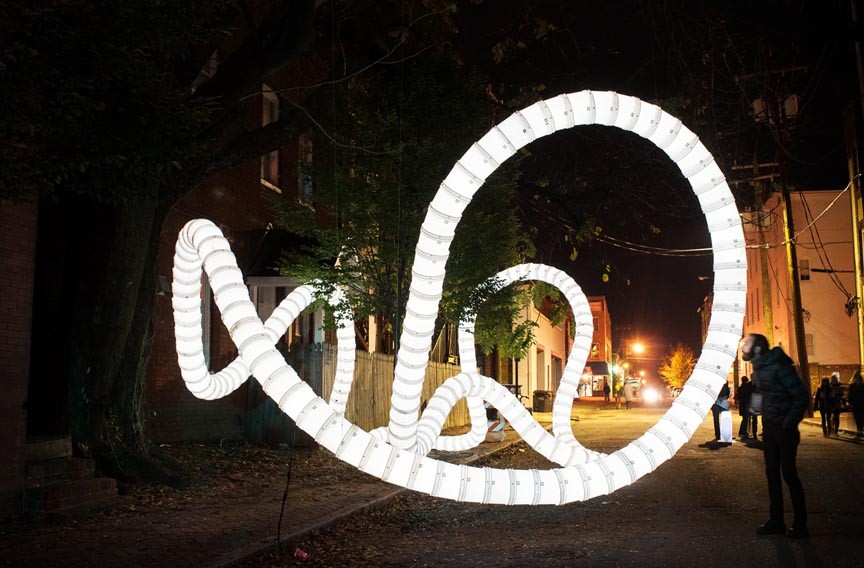 Great art is created for posterity. An artist produces and future generations can admire, question or dislike the work as it continues to be seen and interpreted long after the artist is gone.

So why would anyone want to create art for only one night?

InLight, begun six years ago by 1708 Gallery, was intended to be a cultural gift to the city, a chance for the public to experience art outside of a gallery. This year, Richmond's annual exhibition of site-specific, light-based art and performance takes place along the canal walk. Artists are expected to use the architecture and landscape features — the canal, flood wall, sidewalks, bridges, even plants — as integral parts of their work. But after that night, the pieces are dismantled, never again to be seen as they were intended.

Anna Golden's installation is called "The Wind Is Blowing the Day Around," a quote from a young child as he watched colored light and shadow swirling around each other on a screen. "As children play with light and shadow, they narrate stories filled with symbol and metaphor," Golden muses. "These stories are something on their own and they also suggest something deeper."

"This installation will feature a film of children creating with light and an interactive light studio where the audience can experiment with light as well," Golden says. "Children use media and materials like contemporary artists do, to explore ideas and test theories. What if, by offering the tools of their play with light to the city, the children become catalysts for new discovery and joy?"

As for the transience of the experience, Golden says: "When children use media and materials, they're only concerned with moments of creation, not future or past. Light and shadow are the perfect media to create liminal space and that's where young children are, in the space between where you are and what will happen next."

For collaborators Laurids Sonne, Michael Ashley and Rachel Cohn, their contribution, "Nonesuch Tales of Ardea Herodias," evokes popular amusements such as the magic lantern shows of the 1800s with pictorial recitations illustrating and layering historical events that happened in places such as Shockoe Bottom and the James River.

"We see ourselves very much like a band performing new compositions for the first time and hopefully the audience will remember the performance," Sonne says. "For us, this project is a process. We could imagine adding more compositions to the repertoire as we experienced more stories to add to our set list. The idea that it's only one night allows for a certain degree of spontaneity and experimentation. We'll perform the piece multiple times, but since it is live, we aren't exactly sure what'll happen. That's interesting for us as performers and hopefully for the audience as well."

Ross Fish of Savannah, Ga., worked with sculptors Lilli Fayaz and Sean Ludwig to create his communal, interactive music installation, "A Breath of Fresh Air," where he's hoping participants will make music together through skin contact.

"I'm a big fan of public art and interactive art and my installation is based on people from all walks of life coming together," he says. "There are six pools of water and each is its own instrument. When participants touch a metal object in the middle of the installation and then touch someone else, that person is capable of making music in the pool."

Whoa, strangers touching strangers? "A lot of my inspiration comes from the fluxus movement of the '60s," he says. "The here and now is the message in my piece. It's more of a 'happening' where you experience the moment more than the object."

But is one night enough of a lifespan for months of hard work? "It's more poetic when interactive art has a lifespan. I think we need to forget about art every 10 years," he says, with all the fervor of a 21-year-old. "It's not necessary to hold on to art. We constantly need to cycle through ideas. I love the idea of art only available for a certain amount of time." S