From Japanese geek chic to mellow mushrooms, Richmond’s plate is getting fuller. 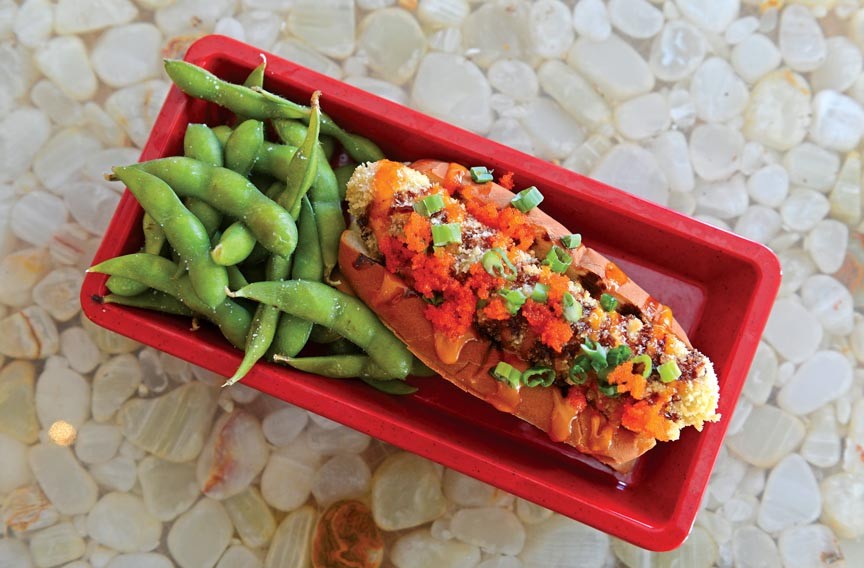 Enter the bento dog as Richmond's newest food group. It's the signature dish at A2, a futuristic cafe and lounge that opened at 1112 E. Main St. last week. The tempura-fried hot dog with Japanese mayo, nori flakes and teriyaki is a street-food favorite in major cities; variations have pickled daikon, eel sauce, noodles and other flavors packed onto a bun.

"We want to show what's new," owner Holy Yang says of A2's concept. "Japanese are all about innovation, and we're incorporating that into food and life." They're doing it with Asian fusion cuisine, liquors and beers as varied as local and Laotian, and a mindset that's modern. "This is a mingling spot, a style of dining that's not traditional, but a place where people go to meet people," says Yang, 24. Tables are tightly spaced metropolis-style, and the minimalistic spot holds just 50 guests.

A2 is into what's known as geek chic, Yang says. Servers wear suspenders and bow ties and carry clipboards to tables decorated with beakers. Tabletop ordering pads are being added, and she says technology will be as integral as eco-friendly practices. Her other restaurant, Made in Asia, is groundbreaking in Chesterfield County for its artful cuisine and chain-free spirit. At A2, a quick-service weekday lunch will shift into happy hour with appetizers and then dinner with table service, followed by lounge hours until 2 a.m. The business is closed Sundays.

"This place is all about positivity," Yang says, "from the dishware to the service to the food. Our staff is confident, and we're good to go," bringing what could be a prototype for offshoots to the market, and a dog designed for modern tastes. 344-3220. A2restaurant.com.

Next door to A2, a creperie is under construction, taking Richmond on another spin of the globe in the coming year. But wait, there's more. Here's a partial list of what's ahead in the city's dining future:

Dutch and Co.: The project seems to have taken forever, but when Caleb Shriver, Philip Perrow and Michelle Shriver officially open their Church Hill business at 400 N. 27th St., expect sudden demand. They've charmed the neighborhood with soft-opening lunches and are known for quality and perfectionism at both ends of the house.

The Savory Grain Restaurant and Drafthouse: Jami Bodhan's new business in the former Empress at 2043 W. Broad St. could open this month. Bodhan's experience and following should help this personal project become a reliable hangout.

Bigger Boka: Chef and owner Patrick Harris says he'll launch a pizza truck in the spring to expand the Boka Tako truck brand. Pies he's testing include one with potato purée and braised short ribs with smoked Gruyere, as if his ardent following needs a reason to believe.

Rogue Gentlemen: "Human nature is impatient," it says on the website for this project, in which details are dealt out in slow release. Same with the "future home of something quite cool" at thelairrva.com, which invites speculation about the imminent opening of a Jackson Ward speak-easy. Backlash and drama could follow, if skeptics are to be believed.

Carly Herring at the Berkeley Hotel: Watch the Food & Drink section for details on a high-visibility launch by one of the city's most innovative and witty chefs in a storied hotel dining room that's ready to break the mold.
Peter Chang redux: There have been so many rumors about where the famed Sichuan chef will expand his empire that it confirms what we know — he's also the master of mystique. Word that he's opening a downtown branch of his Short Pump restaurant has spread to the Washington Post and beyond. But confirmation is trickier than rumor.

The Daily: Construction continues on this high-profile Carytown corner cafe from Richmond Restaurant Group, which also has redesigned the former Delux at 2229 W. Main St. Delays have been a factor in both cases — which is nothing new for projects in the city. But with owners Michelle Williams and Jared Golden at the helm, these are sure to capture an audience looking for the next new thing.

Kitchen on Cary: Culinard continues construction on its new teaching restaurant in the former Dora's Brazilian Grill in Shockoe Slip. Familiar chefs will make the rounds.

Yellow Umbrella Seafood: This top-notch seafood emporium takes over larger quarters across the street from its 5600 Patterson Ave. address, adding more prepared foods, wines and other items in the new year.

Mellow Mushroom: Coming this spring to Carytown, this national chain has a big following in Charlottesville and elsewhere for pizza, hoagies and beer. 3012 W. Cary St.

En Su Boca: It's one of the older projects still on the waiting list. The taqueria in the former adult bookstore at 1001 N. Boulevard is a work in progress that's hit more than a few snags.