An Ashland patriarch adopted a 63-year-old nurse in his last days,and sparked a family feud over his $1.7 million estate. 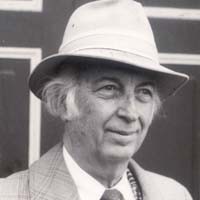 The cornelian beads go to his wife's goddaughter, living in Lucca, Italy.

The portrait of his wife goes to a friend in town.

But what has the extended family of the late Bruce V. English in court is the bulk of his $1.7 million estate, which goes to the nurse he adopted in the final months of his life, when she was 63.

Bruce English — a well-known preservationist and character-about-town — died in January 2008 at 86 in his Ashland house, which English called Holly Hedges. Moore lives there now. Had English not made the nurse his heir shortly before his death, Ted English would have been next of kin, inheriting the worldly remains of a childless uncle who lived a bountiful life.

“He worked on the Manhattan Project. It was all hush-hush,” Moore says in the obituary that ran in the Richmond Times-Dispatch after his death. “They dropped the bomb on his birthday in 1945.”

Three years later he became chair of the physics department at Randolph-Macon College. The next year he married Virginia McCall Shaw, widow of Albert Shaw who, according to her obituary, served as an adviser to “Presidents of the United States from Theodore Roosevelt through Herbert Clark Hoover.” Shaw pursued a career singing opera and was the soprano soloist at St. Paul's Episcopal Church on Grace Street for a number of years.

English did not earn his doctorate degree in physics from the University of Virginia until 1958. While he worked, his wife studied at the library and shared a cubicle with William Faulkner who, according to the Hanover Herald-Progress, inexplicably “thought he was going to be killed as a pedestrian at the triangle in Charlottesville.”

The couple eventually settled in Ashland where they were instrumental in forming the Richmond Symphony, the 2300 Club, the Barksdale Theatre and the Hand Workshop, now known as the Visual Arts Center of Richmond. They cultivated an interest in Hanover County preservation and were active in various garden clubs and groups. A pamphlet that Virginia wrote about a famous trial involving Patrick Henry is still re-enacted several times a year in Hanover County.

Starting in the mid-1970s, English became president of the Edgar Allan Poe Foundation, which runs the Poe Museum. When he stepped down he was given the vaguely dictatorial title of “honorary president for life,” recalls Chris Semtner, curator of the museum.

English loved Poe's book “Eureka,” in which “Poe proposes an early version of the big bang theory,” Semtner says. “He wanted to write a book about ‘Eureka’ and Poe's ideas about physics and astronomy,” but never got around to it.

After his wife died in October 2006, English hired in-home help at his doctor's suggestion the following April. Through Companion Extraordinaire, a home-care provider in Ashland, France G. Moore came into his life.
A
ccording to the nephew's court filing, shortly after Moore arrived, a beloved housekeeper, Joanne Fowler, was fired, and by October 2007 Moore had moved into the house, taking over power of attorney from Pettus Miller, a family friend of 30 years, and became executor of the revised will. On Dec. 21, 2007, Moore legally became English's daughter and heir.

“At the time the will was executed,” the court filing alleges, “[English] was a terminally ill, elderly man suffering from a variety of ailments including Parkinson's disease, or something closely resembling it, painful and debilitating kidney stones, a completely blocked kidney, and memory loss. … and he was taking anti-depressants as well as a large variety of other medications.”

The lawsuit calls the adoption and the amended will products of Moore's “undue influence” over English.

Moore's attorney disagrees. In a letter dated March 2008, William Hamner writes that he represents Moore and served as Mr. and Mrs. English's “personal attorney for the last several years of their lives.”

“From my own personal knowledge,” Hamner writes, “Dr. English retained the ability to attend to his affairs, financially and otherwise, up until the last several days prior to his death when I last spoke with him.” The adoption could not have gone through without the inspection and approval of the Virginia Department of Social Services.

Reached by phone at English's Ashland home last week, Moore, a French native, calmly advises that the matter is “very personal” and “not up for discussion just yet,” in faintly accented tones. Neither she nor her attorneys would comment further on the nature of the relationship.

His obituary may contain the only clue for now, where she says of English: “He told me, ‘I love it when you call me ƒ?~father.’”  S