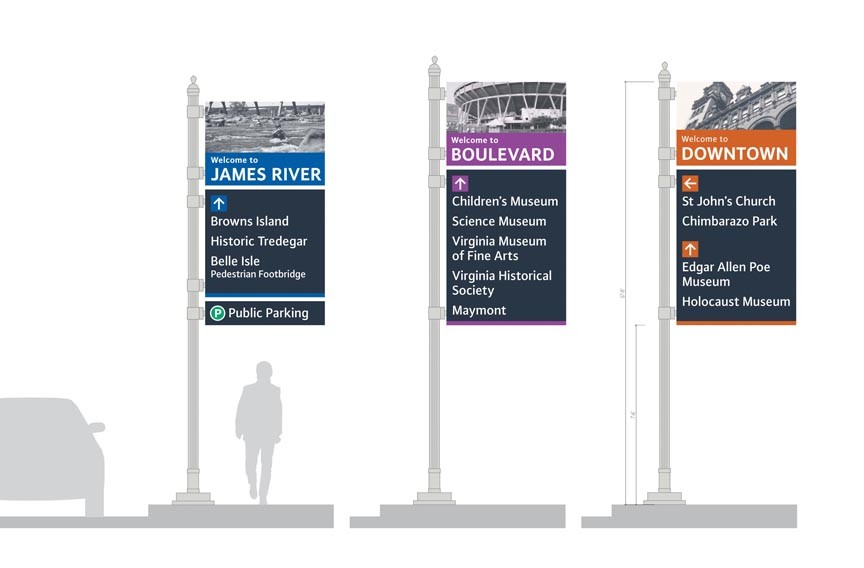 Richmond's tourists won't be lost for too much longer: After more than a year of planning, the city has revealed design and installation dates for new way-finding signs downtown. But some city boosters, tired of waiting, have another idea.

The original plan was to have signs installed before the anticipated tourism boom for the 150th anniversary of the Civil War and emancipation. With the five-year event halfway through its second year, the city still has a motley collection of signs — some faded blue and green, some red and blue — that point visitors vaguely toward attractions downtown and on the Boulevard.

Two Twelve Associates, a consulting company the city hired for $140,000 in December 2010, recently unveiled its designs for large signs, color-coded by district, that include parking information. Mayor Dwight Jones showed the mockups to City Council last week. Soon the plan will begin winding its way through the bureaucracy, starting with the Urban Design Committee and the Planning Commission. Once the signs are approved, officials will seek bids from manufacturers. The city has $750,000 in its budget to begin making the signs.

Tammy Hawley, press secretary for the mayor, says the city hopes to finalize the design this summer so the first signs can be placed on the Boulevard in the fall. Downtown signs would be installed in the winter and spring.

"The project has certainly taken a lot of time for implementation," says Bill Martin, director of the Valentine Richmond History Center and a vocal advocate for better signs.

While Martin says the signs are fine, he and a group of tourism boosters have another, low-budget idea for how to help visitors explore Richmond. They want to see a painted line, 6.2 miles long, which would guide walkers and cyclists to some of the most significant sites. Inspired by Boston's Freedom Trail, Martin's proposed route would begin and end at St. John's Church in Church Hill, passing such places as the Black History Museum and Cultural Center of Virginia, the Jefferson Hotel, the American Civil War Center at Historic Tredegar and the Canal Walk.

Richmond is so remarkable because "we have defining moments in each of those important parts of the American story," Martin says: early settlement, slavery, the Revolutionary War and the founding of the nation, the Civil War, Reconstruction, civil rights and beyond.

"It would be an absolute crime," Martin says, if visitors come here and say, "I don't get it, because I couldn't find it."