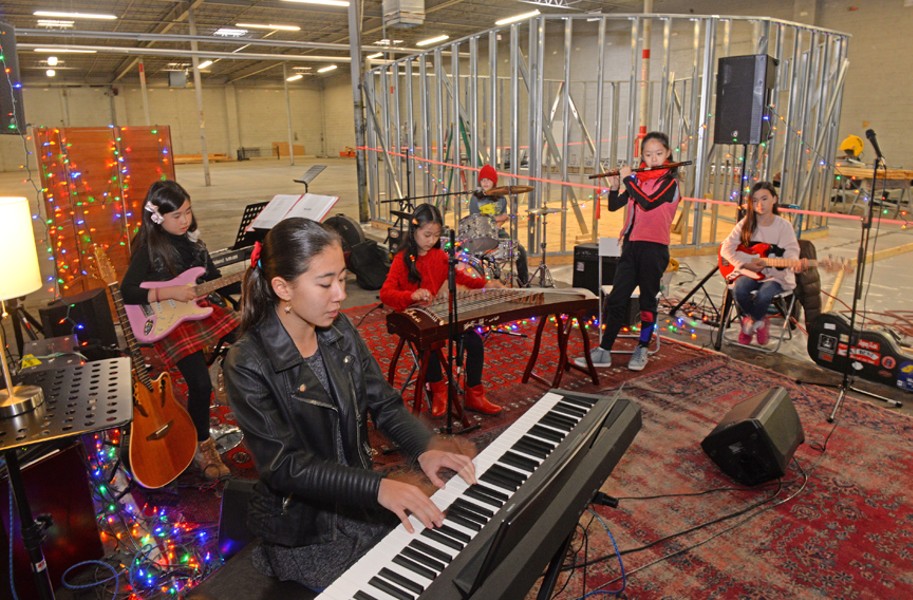 Scott Elmquist Red Flag, a group of middle school girls who play rock in mandarin Chinese, practice at Orbital Music Park, a new space that has been described as “eHarmony for guitars.”

On a chilly winter evening five strangers meet in a second story gallery with one purpose in mind: to find out if they can forge enough common ground to make music together. It's risky because they've never met in person. Will they be able to find a spark, some chemistry that will work?

Orbital Music Park, a startup, has brought them together. Led by two software engineers, Tom Illmensee and Morgan Huff, Orbital Music Park connected these five people to work creatively in a 90-minute impromptu jam session. That these strangers are willing to be vulnerable, to risk embarrassment in pursuit of their individual musical journeys is a testament to the vision of Illmensee and Huff.

Long-time friends and former bandmates, Illmensee and Huff have a passion to create a support framework and sense of community they wish had existed in their early days. Orbital Music Park is the fulfillment of their dream to connect people through music and to encourage them to step out of their comfort zone. It provides the opportunity for fledgling musicians of any skill level to test the waters in a nonjudgmental, curated environment, by arranging jam sessions with others of like mind and ability.

Have you ever sat at home, playing your instrument and wondered what it would be like to jam with others? Have you ever wondered how you would meet another aspiring musician? Does the prospect of a Craigslist meet scare the willies out of you?

That is where Orbital Music Park comes in: Think of E-Harmony for people with guitars. Illmensee and Huff have created a safe space for experimentation and collaboration. Drawing on their information-technology backgrounds the two devised a questionnaire that provides the data they need to link individuals who want to explore playing with others, whether as a duo, trio, or group.

Skill level, styles and influences, and questions about what musicians are seeking from the experience help Orbital to recommend collaborations. Most of the jam sessions are one-offs, although some of Orbital's clients have formed ongoing musical relationships.

They started out using space provided by Art Works, as a way to test their concept. Orbital is now fully funded and ready to throw open the doors at a new physical location on Tomlin Street near Thomas Jefferson High School. The building has been laid out to include two rehearsal pods, each 320 square feet. The goal is to have five such pods, while a lounge will take up half of Orbital's space.

Funky furnishings and unusual décor are designed to send a message.

"You don't have to be perfect here, just colorful," Illmensee says. With the lounge space incorporating the jam pods, Illmensee and Huff have effectively made a brick and mortar version of social media. Come have a chai tea and watch a jam session.

"We want the lounge to be filled, and to grow this little community. We want to let things happen on their own," Illmensee says. "[To] create a chemistry set and see what blows up." Annual memberships are available to the public. There is also a lending library of instruments that can be used in the jam sessions. Need a mandolin? There is one. Keyboard? Got it.

"I am really excited about the new instrument we acquired. … We now have a theremin," Illmensee says.

And so one December night five musicians stood in a circle facing each other.
"This is one of my favorite stories," Illmensee says. Two guitars, bass, and drums were augmented by a female vocalist. "What chokes me up is meeting people who got up the guts to put themselves out there. Miranda confessed her experience was limited to singing in her car. She is into operatic metal. Here she is, willing to step out in front of four strangers who have been playing for a while."

As the night went on the five attempted various songs, trying to find material that suited them and that they knew well enough to play. Eventually they found three songs they could work on. After running through them several times the band sounded quite good, and was clearly pleased with their performance, especially on an old Fleetwood Mac number.

While the band hammered out their choices, Illmensee and Huff sat and watched, offering encouragement. The two were clearly ecstatic as they watched them come together to create something they could be proud of. It was evident that the two former bandmates and IT workers were the biggest fans in the room. As facilitators they pull this off so effortlessly that the musicians never notice they are doing it.

"It's about listening and compromise and adjustment," Illmensee says.

"We had this high school kid. … His mom brought him to us. He was dressed very nicely, like he was going to a classy gig. He plays trumpet. He plays along with records. His hair is all brushed back like Beethoven. And I have no idea what his skill level is. I wasn't sure where to start, so I began playing a jam in one key. I start strumming and out comes this Coltrane-like ribbon of sound. This kid doesn't read music. So we just played this cat and mouse game of sounds for over an hour. What excites me about where Orbital is heading is that I have 50 more stories like that."

The two ask themselves a lot of questions.

"What sort of encouragements do people need on their musical journeys? We want Orbital Music Park to be a place Prince would be proud of. Prince represented this diversity. … gospel, funk, soul, rock. All these styles. We hope when people walk in they say, 'Really? This goes on here?' And pinch themselves."

Orbital can be found on the web at orbitalmusicpark.com and on Facebook.