Memorial for slain police will be at William Byrd Park 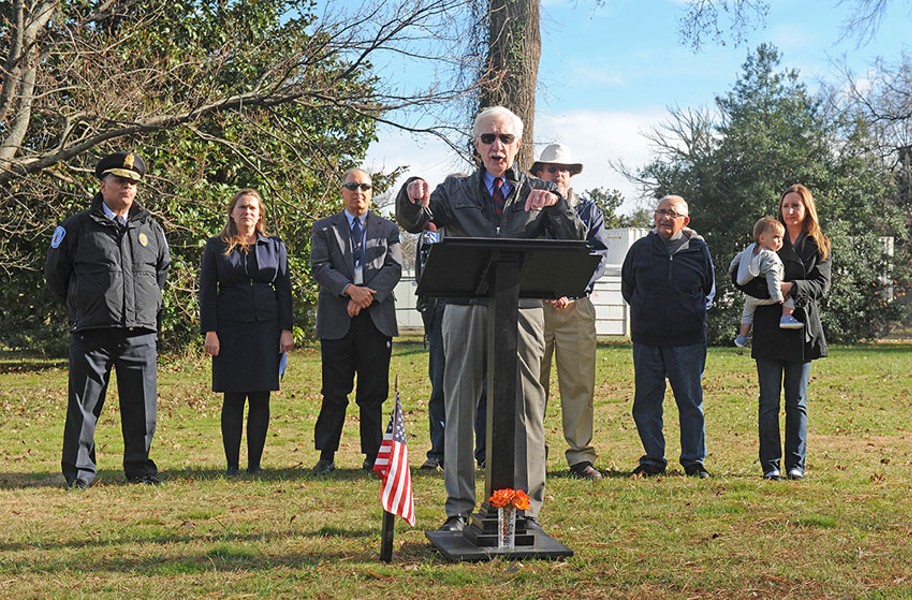 Scott Elmquist At a Byrd Park press conference, Glenwood W. Burley points to the spot where a Richmond police memorial statue will be relocated in 2016.

A disagreement over where to relocate a statue commemorating 28 Richmond police officers who died in the line of duty has been resolved.

The statue of a policeman holding a child will soon stand at William Byrd Park at Trafford Road and Blanton Avenue, a short distance of where another site had been suggested near the Carillon area.

“Our original choice would create a ‘peanut on a billiard table’ concept, meaning our statue would be greatly diminished in a broad sense,” said Glenwood W. Burley, a retired police officer who led the relocation movement. ”I am happy to report we have a better site.”

The Carillon Civic Association and the Friends of William Byrd Park, two neighborhood groups, had opposed placing the police statue close to the Carillon, which was opened in the 1930s to honor World War I dead.

Burley made his statements during a press conference at the new site. Police Chief Alfred Durham said he was “totally delighted” with the new statue location. “Nowhere in their contract does it say you have to give up your life,” Durham said.

Another speaker was Anne Wendell, whose husband Douglas was the last of the 28 police officers honored by the statue. Officer Wendell was shot and killed in 2003 at 33rd Street and Midlothian Turnpike in Richmond’s Southside.

“He was answering a call that came in from residents who said there was drug dealing going on,” she said.

Ms. Wendell said she is looking for the families of other deceased officers so they can attend the commissioning of the new site when it is ready, perhaps next May. She said survivors can call the Richmond Police Academy at 804-646-6117 to make certain they are included.

The police statue is currently located in the Nina F. Abady Park at 412 N. Seventh St. downtown, but few people visit the park.