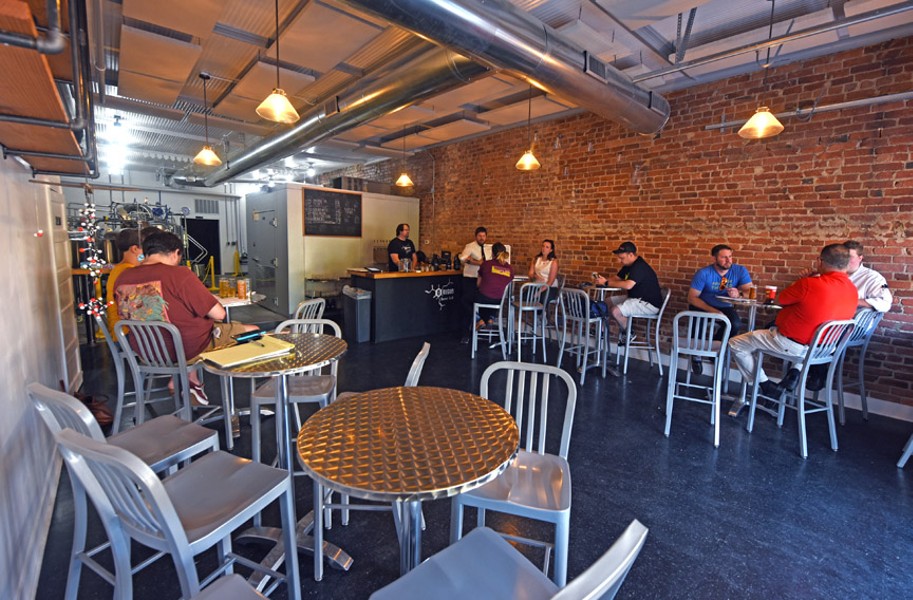 Scott Elmquist Expansion continues and Origin Beer Lab, an offshoot of Center of the Universe Brewing Co., is one of the latest sibling breweries to open in the area — and beyond.

It seems that Richmond breweries are bursting at the seams. Besides new taprooms, many continue to expand, locally and farther afield, with satellites and siblings. Much has transpired since Style’s Oct. 25 article on second locations.

Triple Crossing expanded its production capacity and added a generous taproom that opened to the public in December in Fulton at 5203 Hatcher St. The space includes separate food service offering thin-crust, Neapolitan-style pizza.

Meanwhile, in Goochland, brewery spokeswoman Elisabeth Edelman says, “Hardywood West Creek is due to open in early 2018 on a peaceful, bucolic and easily accessed setting.”

Also in February, Center of the Universe Brewing Co. celebrated the grand opening of Origin Beer Lab at 106 S. Railroad Ave. Just a few miles from the mother ship, Origin brews small-batch and experimental beers along the railroad tracks in downtown Ashland.

“We are running a bit later than we had hoped,” says Dave Gott of Legend’s Portsmouth Brewing Depot. He’s hoping for a mid-July opening.

New and ready to enjoy:

On June 24, Beale’s Beer opened at 510 Grove St. in Bedford, west of Lynchburg. The brewery is a Dave McCormack project. He opened Trapezium in Petersburg in 2016. Like its sibling, Beale’s has resurrected an old industrial space, and both breweries utilize spacious buildings for sizable brewing systems — 30 barrels at both locations — plus kitchens and roomy taprooms that add polished modern elements to an industrial look. The Bedford location includes skylights that illuminate and contribute to the atmosphere.

Trapezium brew master James Frazer is adding the same title at Beale’s to his résumé. “We have hired a head brewer for Beale’s who will work under James,” McCormack says. New brewer Jim Knichel is coming to Bedford from Apocalypse Ale Works in Forest.

Beale’s will focus on lagers that are approachable, malt-forward and easy-drinking, such as the flagship Beale’s Gold, a German-style Helles lager. Other beers will include fruit concoctions and India pale ales. Right now, the taproom is serving beer that’s contract-brewed at Trapezium until its brew house is up and running.

And what about the name? It comes from a legendary treasure that was purportedly buried in Bedford County by the dark, mysterious Thomas Jefferson Beale in 1819 and 1821. A large treasure map mural on the wall, and other design and branding elements allude to the legend.

According to McCormack, another brewery is in the works — this one in an old mill in Amherst County.

Strangeways Brewing at 350 Lansdowne Road in Fredericksburg opened to the public on June 23, in a renovated 10,000-square-foot former Burton’s Menswear warehouse. If that name rings a bell, it’s Strangeways’ owner, Neil Burton, and his family ran the business. The tasting room offers 48 taps indoors and 48 outside. Highlights include a 100-foot, U-shaped bar, an arcade, a patio with an outdoor bar and the brewery’s intentionally strange décor.

Head brewer Matty Eck will operate the 10-barrel system. Eck comes from Søle Artisan Ales in Easton, Pennsylvania, known especially for its IPAs. “Matty is the perfect fit because he’ll be able to expound upon the weird that Strangeways represents in its many unique brews,” Burton says.

Lickinghole Creek Craft Brewery is working on a new production brewery and taproom in downtown Lynchburg that will focus solely on sour beer production and a barrel-aging program.

The city’s downtown has been undergoing redevelopment, including a river walk with a boutique hotel and independent restaurants. The brewery will be taking over a large auto service space at 1300 Court St. “Lickinghole Creek will be the anchor tenant and primary draw for a new retail and restaurant facility in the middle of our rapidly revitalizing downtown,” says Lynchburg Mayor Joan Foster.

Chesterfield’s Steam Bell Brewery has announced a second location, too, but not so far from home. Canon & Draw at 1529 Main St. is expected to open in the fall. The seven-barrel brewing system will put out small-batch and experimental varieties.

It’s not all good:

Restaurateurs aren’t always happy with the strategy behind satellite breweries. After Style’s October article, Matt Simmons and Chris Holder of Capital Ale House expressed concern about the number of customers who get their craft beer at the source rather than at local restaurants and retailers. According to the Brewers Association’s numbers from 2016, nearly 10 percent of all beer produced by craft brewers was sold directly to consumers last year.

At a June 15 meeting of the industry in New York known as Brewbound, executives from beer-centric restaurants Old Chicago Pizza and Taproom, World of Beer and Yard House said they weren’t concerned about brewers’ on-premise sales.

“What’s the difference between a taproom and another restaurant?” asked Gregory Howard of Yard House. He noted, however, that breweries shouldn’t undercut prices in restaurants or the dozens of branded satellite outposts across the country.

Having opened its first location before Virginia’s law that allowed on-site consumption at breweries, since the beginning, Capital Ale House’s focus has been to educate consumers about craft beer and to encourage Richmond’s craft beer boom. Unfortunately, Simmons and Holder say, sales have fallen since breweries started selling their wares directly. S