A look back at a historic week that Richmonders won’t forget as the coronavirus changes life as we know it.

The Richmond couple was returning from a European vacation when the stark reality of COVID-19 struck.

They arrived at Dulles International Airport on March 14 and passed through health screening that evening. The next morning, one of them awoke with a high fever and chills. After calling around, they ended up at St. Mary’s Hospital.

Hospital staff, some wearing hazardous material bunny suits, met the sick man in the parking lot and escorted him to an outside tent.

“It was like a scene from a movie,” his wife says.

He waited there for 30 minutes before getting a test and was told to go home and rest. The staff did not get his telephone number and the man had to call back when he was told he did not have the flu but the results for COVID-19 were not in yet.

Six days later, he was told he tested positive for the virus and has been suffering through what his wife described as “the worst flu in his life.”

This episode shows just how much the strange and threatening coronavirus, also known as COVID-19, has upended life in Richmond and around the globe. It has a high mortality rate and no cure.

After starting in Wuhan in inner China in late December, the virus has quickly spread throughout the world. Strict measures such as forbidding large crowds and social distancing have apparently stemmed the spread in China, Singapore, South Korea and Taiwan. Countries such as Italy are seeing thousands of deaths.

So far, there are 254 cases of COVID-19 in the state, including 28 in the Richmond area and six deaths statewide as of March 23. As in much of the United States, the virus has spread very quickly in Virginia. In a worst-case scenario, the pandemic could kill 2.2 million Americans according to London’s Imperial College.

It has been spreading quickly. On March 12, there were only 18 cases in Virginia and the number rose dramatically. From March 21 to 22, the number doubled.  Some of the biggest concerns are for older people, especially those older than 80 in retirement communities who have other ailments.

The virus is closing schools for at least a month and shutting down restaurants, bars, theaters, libraries, courts, stores and events including sports games and graduation ceremonies. Stock markets and retirement plans are tanking dramatically. 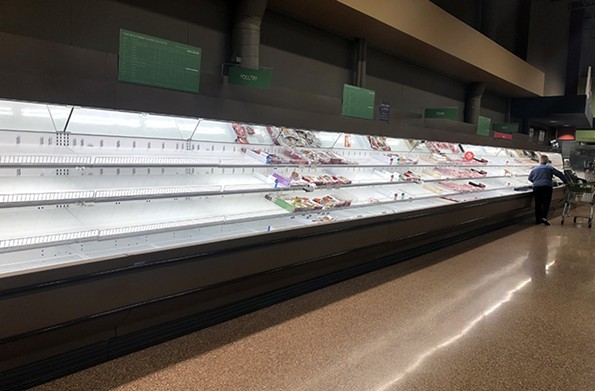 Thousands of area residents are working from home, such as employees of Capital One Financial Corp. Many are being quarantined in their homes for 14 days. Gov. Ralph Northam has banned gatherings of more than 10 people.

The phenomenon illustrates major inequities and the lack of preparedness for pandemics, despite gobs of warnings about them.

About 1.2 million Virginians, most of them in low-paying jobs, are not getting sick pay, according to the Virginia Interfaith Center. Worried about the state budget, the General Assembly spiked a bill this year to expand sick pay although there may be relief in new federal laws. Since March 16, the state has fielded more than 30,871 applications for cash assistance, a 1,500 percent increase over the previous week, the governor’s office reported.

One group being badly hit are gig economy workers who are independent contractors who must work to be paid. They include at-home tech experts, car drivers and restaurant wait staff. Car services Uber and Lyft say they will pay their drivers if they undergo 14-day quarantines.

U.S. Sen. Mark Warner, a champion of gig economy participants, says: “Workers who cannot continue to earn a paycheck during the crisis will face enormous hardship.” He’s proposing setting up a liquidity facility run by the Treasury Department and Federal Reserve to help small and midsized businesses with loans.

The health care system faces criticism for not being more forthcoming about how many beds, ventilators, coronavirus test kits, masks and other necessary equipment are available. On March 20, Gov. Ralph Northam’s office announced that the State Department of Health has received only 5 to 10% of personal protective equipment that it had ordered. “There is a real shortage,” the statement reported.

Asked about bed availability, Joanna Callaway, a spokesperson for HCA Virginia, which operates several large area hospitals, says there are enough beds and that it has “surge plans” if there is a large influx of patients. When asked, she did not provide plan details. VCU Health had not provided details of its plans as of Style Weekly’s deadline.

Six doctors who work at retirement communities in the area have written a letter saying that the state Department of Health has lagged in providing adequate testing to their elderly patients, according to the Richmond Times-Dispatch.

The Health Department “has been misaligning resources to more healthy people rather than people at most risk from bad outcomes,” wrote Dr. James Wright, medical director for Canterbury Rehab and Our Lady of Hope in Henrico County and the Memory Center in Chesterfield.

According to the Virginia Mercury, the state has about 2,000 licensed intensive care unit beds. All have access to ventilators that can save lives if the virus limits patients’ ability to breathe. After days of media questions, state officials say that there are 400 ventilators in Virginia and more could be had from a national stockpile of 12,700 units. The Mercury also reports that the rise in hospital treatment is creating a blood shortage.

Experts worry that if serious cases of COVID-19 increase, doctors might be forced to decide who gets ventilator access and who will die — a horrible choice that medical professionals now must make in Italy.

Food industry representatives say there is plenty of food available but the distribution network has been impacted.

“Our associates working as rapidly as possible to get the trucks on the road and delivered to our stores,” says Emma Inman, a spokeswoman for Food Lion LLC, which operates dozens of stores in the area. Most limited, she said, are hand sanitizers, cleaning supplies and paper products. Similar shortages have hit Wegmans. Company officials say they are restricting hours and closing in-store pubs and food courts as they try to even out supply flows.

For now, food supplies at food banks appear to be adequate.

“Right now, we’re good,” says Jessica Howe Hickey of Feed More.  The outlet is adding frozen meals to its Meals on Wheels program so senior citizens can stock up their freezers for a week or so. 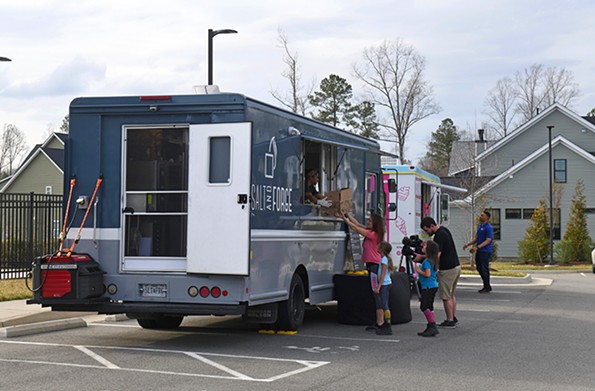 As more people work remotely from home, there are worries that the internet system might not be able to handle the load. Kristen Gohr of Comcast says that its system has built in protections when use spikes. Comcast is also increasing connection speeds.

David Weissman of Verizon says that the biggest spike in web use — 75% — is from people playing web-based games, perhaps by at-home children. Web traffic is up 20%, he says.

Richmond will suffer from upcoming cancellations. It isn’t clear, for instance, what the impact will be on the coming Flying Squirrels baseball season. Local potters and other artists had been working for about two years to hold a national conference of the National Council on Education for the Ceramic Arts this month. The event, which was expected to draw thousands of visitors, has been canceled.

Many restaurants in the area have closed or reduced service to takeout. Fast food chains such as McDonald’s and Starbucks have shut down children’s playrooms and in-store dining.

In Richmond, some of the most prominent restaurateurs, including Johnny Giavos, Eat Restaurant Partners and others have met with Mayor Levar Stoney to come up with a coordinated response to the crisis, according to the Richmond Times-Dispatch.

The owners operate such popular eateries as Kuba Kuba, the Daily, East Coast Provisions and Alewife. Some of the ideas are relaxing parking restrictions to make it easier for patrons to pick up takeout meals and take breaks, according to Jim Nolan, Stoney’s press secretary.

The Department of Motor Vehicles has closed its service centers, saying that motorists can register vehicles online. There’s also a chance that ABC stores could shut down temporarily. One medical professional says that could be a bad move because alcoholics with withdrawal seizures could inundate emergency rooms.

On March 19, Altria, one of the area’s largest employers, announced it was shutting down its Philip Morris USA Manufacturing Center for two weeks because two employees had contracted the disease. Its chief executive officer, Howard Willard, has temporarily stepped down for the same reason. Stock analysts expect the company to continue to do well. “COVID-19 doesn’t stop addictions,” wrote Seeking Alpha.

On the flip side, some firms are benefitting from the COVID-19 crisis. Amazon, for instance, has two facilities in Chesterfield County that fulfill net-based orders. They typically employ 2,000 local workers and can add 1,000 more around the Christmas season. Gun sales are also breaking monthly records, according to the Times-Dispatch.

As the pandemic struck, more people are buying products online for home delivery to avoid contracting the disease in crowded stores. Amazon has announced plans to add 100,000 workers nationally, including 700 more in the Richmond area. It is temporarily raising hourly pay rates by $2. The sales behemoth has drawn national criticism, however, for not doing enough to ensure that its workers are safe, according to the Washington Post. Amazon did not respond to a Style Weekly request for comment.

Grocery outlets such as Kroger and Walmart are adding workers.

Economists are uncertain how long the pandemic will last. President Donald Trump predicts that it will be over by August but others fear it will last 18 months. A major fear is that it will tip the economy into a major recession if not a depression, ending years of strong growth.

Congress is pondering massive aid packages that could see every American receiving checks that could total more than $1,200 each. Another bill would require companies with fewer than 500 employees to provide sick pay in exchange for tax credits. Federal help for those in the Supplemental Nutrition Assistance Program would be expanded and the work requirement would be waived.

The future is uncertain and many Americans are still trying to flatten the curve, though it’s clear that the country got off to a dangerously late start.

A worker in a local hospital told Style they were expecting a shelter-in-place order soon and that morale was low, thanks in part to the coming spike in cases and a lack of protective wear for health care workers. The Centers for Disease Control and Prevention was telling people to wear bandanas if they had nothing else.

Nolan put it this way:

“This is like the end of a basketball game when you’re down six points and you keep fouling to stretch out the time.”