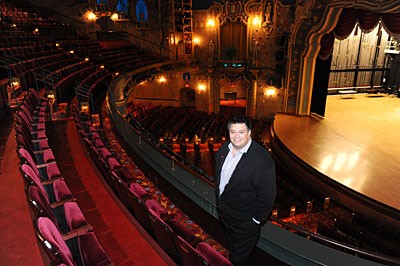 The new executive director at CenterStage knows his building's controversial history. But Richard Parison, a veteran arts administrator, says he's determined to change its image as an exclusive opera house for rich county dwellers. “I can't rewrite what happened here,” he says. “But I want to learn from what happened.”

Parison grew up in Leroy, Ohio, a suburb of Cleveland. As a young lad he worked on musicals at the local Lakeland Community College. After earning his degree at Miami University in Ohio, Parison returned to Lakeland to head up its theater program. “I spent two years turning this fantastic arts center, which it was, into a subscription series, having lectures and producing theater,” he says. “You don't know any better when you are 20. You just do it.”

He eventually hooked up with northern Ohio's Great Lakes Theater Festival. After a few years shuttling between the festival and Lakeland, Parison joined the staff of Philadelphia's prestigious Walnut Street Theater Company and ended up staying nearly a decade as a producing artistic director before moving over to the Prince Music Theater. That job led to an executive position at the distinguished Barrington Stage Company in Massachusetts, where he spent three years before being tapped to head CenterStage in November. “I'm still a theater director at heart,” he says. “It's the same work … bringing people together.”

But even a cursory look at CenterStage's schedule would yield questions about the venue's future. Aside from an appearance by the famous BalAc FolclA3rico da Bahia, a Brazilian music and dance troupe, and the expected productions from the Richmond Symphony and Ballet, the venue's spaces seem underused; comparatively, the Modlin Center at the University of Richmond weekly attracts consistent, world-class programming. This is the kind of situation that CenterStage critics (such as this writer) warned about: the creation of another downtown white elephant with limited appeal that would require expensive upkeep, a top-down enterprise that would take away limited funding resources from more vital artistic endeavors (such as Curated Culture's First Fridays Art Walk, which is wildly popular but enjoys no financial support from the city).

The bloom also seems to be off the rose when it comes to local support. Privately, some smaller arts groups have complained about CenterStage's high rents; they plan to stage shows elsewhere in the coming months. Clearly, now is the make-it-or-break-it time for the center. Style Weekly spoke to Parison about the challenges and the possibilities in his new office, barely broken in.

Style: You come from a producing background, but CenterStage is wholly programmed by SMG, which programs other regional venues. How is that going to work?

Parison: SMG works very hard to make sure that this is an attractive venue for promoters. I'm going to work very closely with them to make sure whatever happens here happens really well. They have a vast network of connections which helps me understand a world [of presenting outside shows] that I don't know very well. SMG runs the day-to-day operations — they schedule the facility for rental, keep it clean. …

I look at the Modlin Center's calendar, and CenterStage's, and it's relatively bare here in the coming months.

The hope is that there will be more shows. The resident companies [such as the Richmond Symphony, the Richmond Ballet and the Virginia Opera] do have a lot of time that they take with their programs. But SMG is working very hard to fill the rest of the dates. And I'm going to work to put things in that fill in other cultural gaps. Today's [high-end] performers often book several years out. So, forget next year, I've got to plan for two years out.

And you can't reduce it to just what's on the calendar. There's our arts education program and the work we do with our educational partnerships … and the amount of kids that come through here with instruments and dance tights in tow. It's a more global picture than just what happens on the Carpenter schedule. It's not just a space, it's an experience.

So what should Richmond audiences expect from this venue?

It should be the catalyst for the arts in this community. But how will that manifest itself? We don't know what the future will hold. We're still finding that out. … Maybe we will act as sponsors of things that happen out in the greater Richmond community.

Which brings us to First Fridays. There was a rumor floating around that CenterStage was going to merge with the Curated Culture's popular Art Walk. Any truth to that?

We have partnered with them on things in the past. Curated Culture is its own nonprofit entity and I think it will remain its own 501(c) (3). But we will certainly help to support the programming that they do. I met with [Curated Culture Director] Christina Newton a couple of times and, while I don't think the [CenterStage] Foundation will absorb Curated Culture, I want to know from her what I can do to help First Fridays.

They have a great infrastructure, a great network and they do these great music events. And I think the music world is something [that is] a little untapped here. In future seasons, I think it would be great to have music going on around here, beyond what's on the stage … like street musicians outside playing as people arrive at the ballet. I love that. That kind of thing makes me feel like I live in a cosmopolitan urban environment.

What about the argument that those sitting on the CenterStage boards represent only the area's corporate interests — not exactly the type of creative people that should oversee a vital performing arts center?

I'm not looking for better ideas. I'm looking for a wide variety of people to give me ideas. For me, I don't think you have to be of the theater or of the arts to have the best idea in the room. Because, ideally, a staff person with experience can take that idea and make it a reality.

What would you say to the average taxpayer who's not into classical music or opera who wonders why he's paying $500,000 a year to keep CenterStage going at a time when the city and state are battling budget shortfalls?

I'll give you a long answer to that but I'll have to get back to you. [Several hours later, Parison releases a statement addressing this question.]

In thinking about your question part of my focus came to one important aspect of my work here at CenterStage and that's to help send a local, regional and national message that our community is successful. I mean, look at the New York Times article that touted the wonderful Richmond Ballet “Nutcracker” production and celebrated CenterStage as a beautiful venue at the same time. Before that, Tony Bennett stood on the stage of the Carpenter Theatre and remarked how fortunate Richmonders were to have such a wonderful performing arts center here in downtown -- and then proceeded to sing a capella to demonstrate the great acoustics.

More to the point for the local taxpayer, it is my goal to try and reach every one of them and make them feel welcome here at CenterStage at any number of traditional or nontraditional events. We want to be accessible to everyone in Richmond across the street or across the region.

To that end, we work hard every day to be responsible stewards of every tax dollar and philanthropic dollar that flows through CenterStage. This is a community investment and everyone here is passionate and dedicated to preserving it in the best possible way. The taxpayer is getting multiple venues in which we provide services to any number of community stakeholders. They are getting effective and efficient operations management of CenterStage. SMG does a wonderful job in maintaining the buildings. Going forward it's my goal that taxpayers will continue to see affordable programming on our stages that reflects the wonderful diversity that exists in our community. For example, the BalAc FolclA3rico da Bahia (show) has tickets that start as low as $8, and the top ticket price is $25.

And all of this can have tremendous economic impact. The recent Cultural Action Plan indicated that arts, culture, history and heritage contribute at least $300 million annually to the local economy.

Sometimes these bench marks, rather than measured in dollars, are measured importantly by the increased artistic, educational and cultural opportunities. Our education initiative is helping students across the region use the performing arts to aid in their mastery of core subjects and provide increased access to the performing arts. The region's artistic activities and cultural facilities provide a great deal of the beauty and pride that as that same Cultural Action Plan states, “provide a source of local pride.”

I've heard from a couple of local performing arts groups that the CenterStage rent is simply too high for them to use the facility. If true, shouldn't these local groups who are already getting taxed get a discount on rents?

That's SMG's territory, and I know that they are doing their best to keep down the costs. If the rent is too high, of course the companies will go elsewhere. But then we will adjust. This is a problem that, I think, will correct itself.

Do you have a timetable for success here?

Not yet. Because we are still evolving. We opened last year and people say, “You've been open a year, you should know what you are.” But I think we're still finding out — with this management model — how we can contribute to a vibrant performing arts experience.