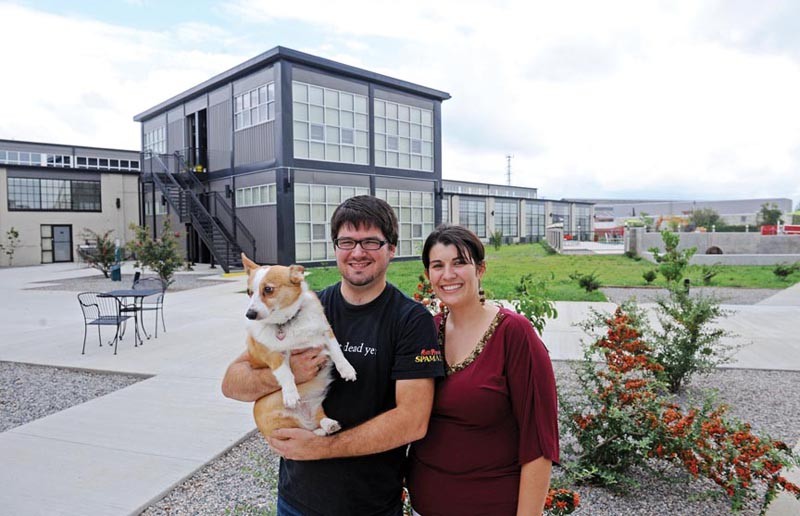 This place is weird.

Its stark geometry gives it the feel of a kibbutz. Or a back alley in Mos Eisley. Or a desert compound — the artsy kind, not the culty kind.

That last one’s not far off, actually. Here at the New Manchester Flats, Fountainhead Properties has turned a former stove factory into a green-built hive of apartments, businesses and soon, a restaurant.

Redevelopment of old buildings is nothing new. It’s Richmond’s favorite hobby, after all. But Fountainhead made an outlandish bet: that people would want to live in a modern complex surrounded by junkyards, weedy lots and Interstate 95, as long as they had suburban-style amenities and a sense of community.

The question now: Can Fountainhead do it again? And again?

The flats are at the southeastern end of Sixth Street, on the very edge of Manchester. “Some would say past the edge,” Papa says. “We’ve created another edge.”

In the labyrinthine complex there are 172 apartments. Fifty-five are designated as affordable housing (rent between $420 and $830 per month), half of which are designed for people with disabilities. The rest are rent for market rate, $830 to $1,800 per month. With concrete floors and high, hardwood ceilings, the apartments give the impression of being upside down. Papa calls the look “industrial honesty.”

The flats also are home to media-production facility Studio 108, along with 38 studio spaces used both by creative companies and artists such as Heide Trepanier. All the studios have been leased; 95 percent of the apartments are occupied. In 2012 Fountainhead will complete a third building with 92 more apartments. The entire 10-acre project to date has cost Fountainhead $38 million, Papa says.

Fountainhead began work on the flats in 2008, when real estate was the last place anyone wanted to put money. “Our timing was pretty bad,” Papa acknowledges. But the numbers he’s seen since the crash support his prediction that Manchester was Richmond’s new residential hot spot.

The trends: People ages 25 to 30 prefer renting to buying, Papa says. City populations — including Richmond’s — are growing. There’s a chronic shortage of apartments in the Richmond area. And living downtown is just plain hip, Papa says.

Andrea Goulet and M. Scott Ford both live and work at the New Manchester Flats. The newly married couple always wanted to live downtown before they had children, Goulet says. They found they could rent a one-bedroom apartment and a 300-square-foot office for their Web-development business, Corgibytes, for the same amount they spent on a two-bedroom in the West End.

“Our image changed too with our address,” Goulet says, explaining that “people automatically thought that we were more hip, more creative.”

Fountainhead wants more tenants like Goulet and Ford. In 2012 it will start building 200 apartments on the two city blocks occupied by Miller Manufacturing. One half will be called Liv-Space, the other Liv-Work, with studio space and apartments. Fountainhead also is buying the old paperboard plant that stands on a little island on the western side of the Mayo Bridge. That will become the 91 apartments called South Canal (and an elevated park built on a concrete ramp). “We are really busy,” Papa says.

They’re not the only ones. Robin Miller’s development company, Miller & Associates, owns more than 150 lots in Manchester and has been busily developing condos and single-family homes. To the west, other developers are building a 188-apartment building on McDonough Street, just south of the Manchester Bridge, and a 200-unit building on Cowardin Street, at the foot of the Lee Bridge.

But Manchester still is missing a few important pieces. One is retail. “The one big, big, big complaint,” Goulet says, is the lack of a grocery store nearby. And the empty storefronts of Hull Street have yet to be refilled.

“Candidly, it’s just not a reality to expect that J. Crew is going to put an outlet on Hull Street now,” Papa says. But he says he’s confident that as more people move into Manchester, shops and businesses will follow.

From the outside, however, Manchester still looks the same: bricky, industrial and gritty as hell. “You’re going to need some place to inhale air,” Gulak says. “Sit on the grass, throw a ball or something like that.”

Gulak’s team was one of seven that submitted proposals on how to green Manchester in a recent competition sponsored by the James River Green Building Council. Ideas ranged from the straightforward — small parks and improved river access — to the far-out, such as indoor farms in the old Southern States silo and an “anaerobic digester park” that would process dog waste and compost.

Papa thinks Manchester already has its own, hidden natural splendor. Just behind the New Manchester Flats, there’s a beautiful meadow next to I-95, he says, teeming with birds. Trouble is, it’s fenced. All that needs to happen, he says, is “to figure out a way to open the gates.” S