A Richmond photographer is meticulously re-shooting the work of Ansel Adams to document environmental change. 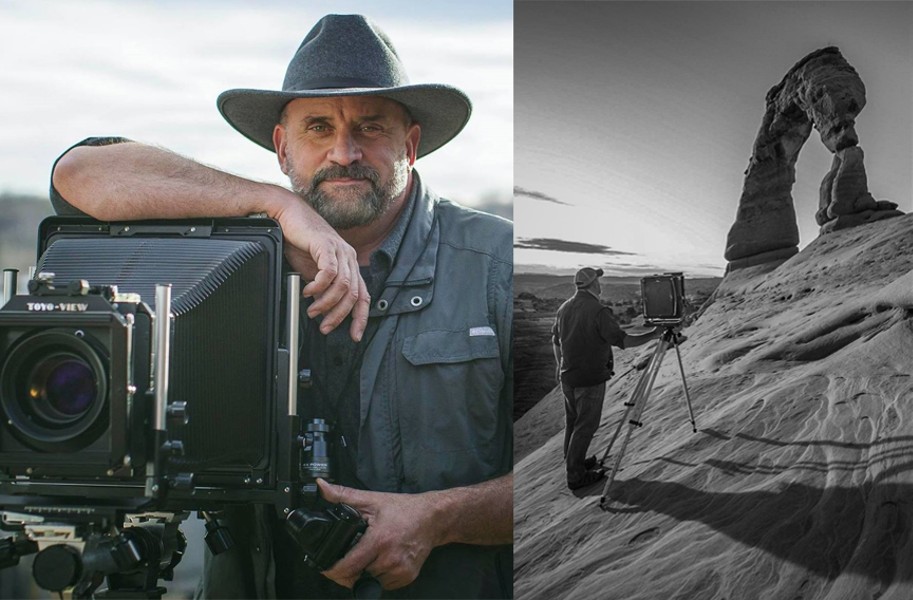 Frank Ruggles is the kind of photographer who has a Stetson named after him.

Dubbed the Ruggles, the photographer’s field hat has an extra-wide brim for maximum shade when shooting outdoors and is necessarily water-resistant. The kicker is that it’s made of wool felt in an 18% neutral gray so that, as Ruggles puts it, “you can meter off it for exposure and white balance.”

Ruggles, a former paratrooper, was fresh out of the Army and looking for a new way to serve his country. While taking a photography class, he was introduced to the work of landscape photographer and environmentalist Ansel Adams. He wondered how he could use photography as a way to serve. After stints working as a photographic printer for Colin Powell and the Smithsonian, Ruggles landed the position of official photographer of the National Park Service from 2007 to 2011.

His inspiration came from photographs Adams had taken throughout the park system during Franklin D. Roosevelt’s administration. After being given a five-year assignment, Adams was recalled following the attack on Pearl Harbor, having shot 150 photographs in 15 parks. Commissioned by the federal government, they’re in the public domain. “What we can see is a snapshot, a perfect sampling of what those 15 parks looked like back then,” he says.

Ruggles’ inspiration was immediate. How much change had occurred since Adams had documented the parks? And if he didn’t set out to redo Adams’ project, who would? Dubbing the project 79 Years, the name refers both to the average American life span and to the fact that he intends to wrap up the project in 2021, 79 years after Adams shot the originals.

The good news was that Adams had been a meticulous note taker, so Ruggles had details on date, time of day, aperture and shutter speed. It was a matter of record what camera bodies, enlarger and lenses Adams used. The bad news? The iconic photographer made no mention of the location of the 150 shots. So while a photograph of the Grand Canyon is labeled “South Rim,” that rim extends hundreds of miles.

Undaunted, Ruggles sees the search for specific locations as a fitting use for his experience.

“I can tap into my Army skills and read relief maps, use a map and compass,” he says. “I’ll be walking the Grand Canyon for two weeks at a time, using Adams’ pictures to locate a point on the horizon.”

His goal is to show environmental change by documenting exactly the same sites today.

“When you have a photograph of the exact same place, there’s no room for interpretation,” he explains. “My photographs could demonstrate drastic changes in the environment or they could show that when we determine a place is worth saving, we can save it. It’s not all doom and gloom.” At the same time, he’s hoping to inspire a young generation of park lovers who will be the stewards to ensure that the parks are there for their grandchildren.

Determined to be as authentic as possible, Ruggles scoured the U.S. to find the exact model camera Adams used. He called 71-year old Alan Ross, Adams’ former assistant who was with him until the end, and got him on board as senior advisor. Ruggles felt like some universal force was watching over the project when Ross told him that Adams had used a Beseler 8-by-10 enlarger that Ross himself had designed. Only a few weeks earlier, Ruggles had driven to Arizona to purchase that exact enlarger without knowing its ties to Adams.

The self-funded 79 Years project is being run out of a former bank building on Brook Road. Despite its nondescript exterior, the inside is a photographer’s wonderland with the bulletproof glass replaced with concrete to create a spacious darkroom. Ruggles enlisted Brian Grogan, who worked at the Ansel Adams Gallery and spent time with Adams in his darkroom, to help set up his darkroom to be historically accurate, even to the use of period chemicals. A custom table built in place that’s used to measure, cut and frame photographs now resides in the former lobby.

Once completed, he’ll send full-size prints to the National Park Service and publish a coffee table book using both sets of photographs.

“I want to take the concept of environmentalism out of the abstract and let people see with their own eyes,” he says.

Currently, Ruggles is in the research phase, taking two-week trips in his Jeep to scout Adams’ locations and document them for when the photography phase begins next October.

“This was an idea Adams dreamed up on his own before he approached the cecretary of the interior,” Ruggles says. “I’m never going to fill Ansel Adams’ shoes but I’m hoping to follow in his footsteps and walk the trail he blazed.”

Donations are welcome at 79years.com.