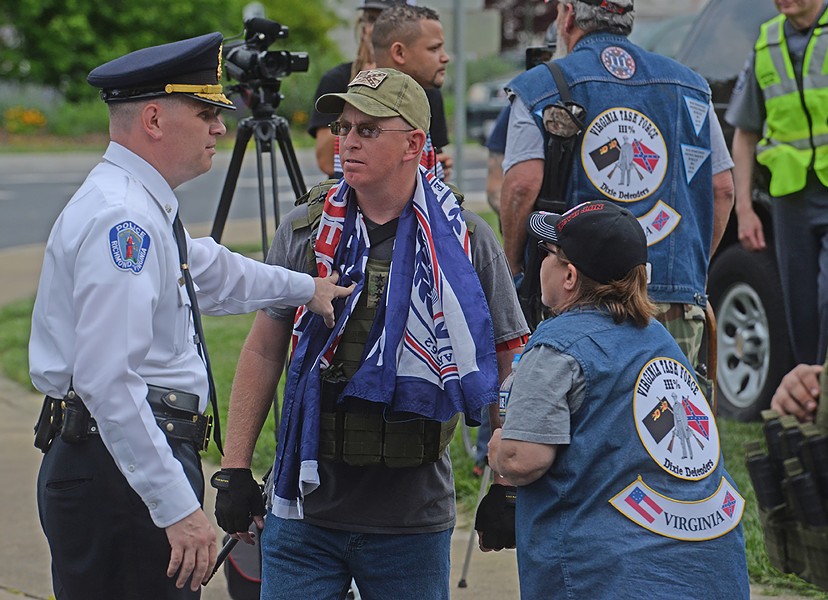 Deputy Chief Steve Drew of the RPD holds back Thomas Crompton of the New Confederate States of America, which again held a small rally on Monument Avenue met by many more counter protesters.

Two distinct crowds show up at the Robert E. Lee statue on Monument Avenue the morning of May 5, one outnumbering the other by about 100 to 12.

Members of the New Confederate States of America (or CSA II) are decked out in camouflage pants and bulletproof vests, with .40-caliber handguns strapped around their legs and [assault rifles] slung over their shoulders. Halfway around the traffic circle, representatives of the Virginia Defenders for Freedom, Justice and Equality wear black t-shirts with the organization’s name in red. Some hold a banner that reads “No shrines to white supremacy! Take ‘em down now!”

“The Confederacy itself was built around the enslavement of people, of black people in particular,” says Virginia Defenders member Joseph Rogers, whose great-great-great grandfather was a slave. “As a group that labels itself as the New Confederate States of America, it’s kind of difficult to not be racist and to also be the new Confederate.”

It’s been nearly nine months since the violent clashes between white supremacist groups and counter-protesters at the Unite the Right rally in Charlottesville, and what separates Saturday’s event from last summer’s, aside from a considerable difference in numbers, is the absence of blatant, overt white nationalists. If any self-proclaimed Nazis are in attendance they keep it quiet, and nobody chants “Jews will not replace us” while marching in circles.

Protesters on both sides agree that groups like the Ku Klux Klan and other inherently racist organizations are not welcome at a rally that’s intended to be peaceful. But that’s where the commonalities end. While some Confederates and Dixies claim they want no association with racist hate groups, many on the other side argue that there’s a slippery slope from one to the next.

“I do see a difference, but it’s not as great of a difference as they would probably like it to be,” says Rachel Robinson. “The alt-right guys are unashamedly racist. These guys say they’re not. But they support Robert E. Lee as a hero so it’s a little confusing.”

Wearing an “Alt Right Delete” sticker and a “Commie Bitch” pin on her black tank top, Robinson weaves through the crowd with a basket of white paper flowers. She hands them out to protesters on both sides, smiling and reminding everyone of the interfaith vigil scheduled for later.

She believes that everybody in attendance wants the event to end peacefully without any injuries, she says, and she’s glad the police have an abundant presence.

“We don’t want Richmonders to be nervous on their streets because of these yahoos,” she says. “We also don’t want this to be normalized, and that’s why we always show up to these events. Because by ignoring it, it doesn’t make it go away, it brings more of it.”

Among those accepting a flower is Doug Sweet, a Dixie Defender from Mathews County about 75 miles east of Richmond. He made the trip to Charlottesville last summer for Unite the Right and Saturday’s rally marks his third time protesting on Monument Avenue.

“It’s a beautiful statue, isn’t it? I just don’t want it erased,” Sweet says. “I don’t want Arthur Ashe erased either. I don’t want anybody erased. I think it’s great we have Monument Avenue, I think it’s here to celebrate America, American history of all brands, shapes, colors, it doesn’t matter. And if they want to see more monuments put in, I’m all for that, too.”

Sweet says he’s open to having a civil discourse with anybody who disagrees with him, and he’s not here to cause any pain or violence.

“They have an opinion just like I do, and it’s valid just as good as mine,” he says. “My perception of their opinion is they think that we’re racist, and one reason why I’m here is to show I’m not a racist.”

He’s never been accused to his face of being a racist, he says, and were that to happen, he believes it would be a result of a miscommunication.

“Either I’m misrepresenting myself or you’re misinterpreting me, and we’ll have to come to some kind of conclusion on that because I’ve never been a racist,” says Sweet, wearing handgun on his right hip and a t-shirt featuring a Confederate flag. “I wasn’t raised racist. Really I’m offended by someone calling me a racist just because I have Confederate ancestors. I’m not a racist.”

He says he can understand why someone would associate Confederate groups like his with the ideals of white supremacists, but Sweet insists there’s a difference. Even the CSA IIs, with their assault rifles and military garb, are more extreme than his group, he says. He goes on to say that the “globalist left” doesn’t understand his side’s viewpoint because the history books got it all wrong. “The Civil War was not all about slavery. It wasn’t over slavery, and it’s not over slavery now,” he says.

When Kasey Landrum arrives, a member of CSA II and the local activist known as Goad Gatsby are in the midst of a loud, angry exchange across the street from one another. A wall of cops separates the group as tensions rise, and Landrum can’t help but notice that most of the officers have their backs to the armed protesters.

“As you can see, the entire police force is facing two men that are yelling that are probably not that big of an issue. And the people with guns are not really monitored,” Landrum says. “From a community policing standpoint, it shows that the concern isn’t those guys, that it’s us. That’s problematic in itself.”

Like a lot of those at the rally, this isn’t Landrum’s first rodeo. She’s met several of the Confederate protesters before, and she’s had more than one interaction with Deputy Chief Steve Drew of the Richmond Police Department, whom she approaches with her concerns about the policing tactics.

Landrum says she’s not worried for her safety at events like this, and like others have expressed, she’s glad the KKK and other white supremacist groups didn’t show up. But in her mind, the CSA IIs and Dixie Defenders shouldn’t get to claim much of a moral high ground because they “align very closely with all of those ideals.”

For nearly four hours, each side of the rally does its own thing. The CSA II blasts a playlist on repeat, featuring a song called “Raise Your Battle Flag” by the Celtic Confederate. Nearby, Virginia Defenders and faith leaders speak to the crowd and lead the group in songs about peace and unity.

Aside from a tense half-hour period of shouting insults, interaction between the two sides is mostly limited to negotiations about when to call it a day.

Despite the projected 6:00 p.m. end time advertised on the CSA II’s Facebook event page, the group packs up and leaves the area around 1:15 p.m.