Greek gets the modern family touch at Stella’s the third. 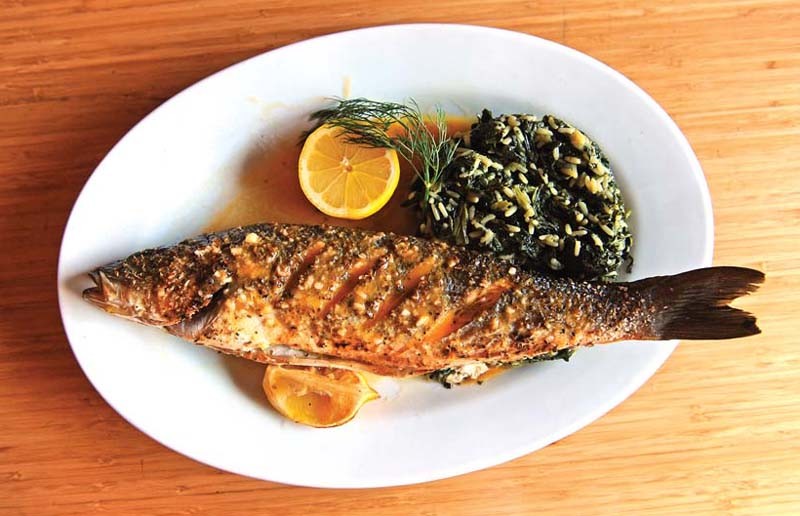 Stella Dikos came to America in the 1950s after an arranged marriage in her native Greece, and shortly thereafter the teenage bride and her husband opened a restaurant, the Village, near what was then the Richmond Professional Institute, now Virginia Commonwealth University. More than half a century later she and her family are the city’s pre-eminent restaurateurs.

The new Stella’s, the third to be named for the matriarch, is the crown jewel in their growing empire, adding to Kitchen 64, Kuba Kuba, Sidewalk Café, 3 Monkeys and, beginning in December, the Continental Westhampton in the space previously occupied by Phil’s Continental Lounge.

As energetic as ever, Stella, a compact, congenial dynamo who turns 70 in January, is back in the kitchen after a brief interlude. (Her husband, Steve, died six week before the Aug. 1 opening.) According to her daughter Katrina Giavos: “Mom is ‘cutting back.’ She arrives at 6:30 to bake her famous bread, makes her magic happen at the prep table, and leaves between 4 and 5” — a mere 10-hour day.

Two young chefs, Stuart Lowrie, formerly of the Hanover and Willow Oaks country clubs, and Russ Williams from Sette, do the heavy lifting, while Katrina and Johnny Giavos oversee both sides of the swinging door.

This latest incarnation of Stella’s was constructed from the ground up, on a small commercial strip of Lafayette Street two blocks south of Monument Avenue. The interior of the one-story red-brick building was designed by the Giavoses. Completing the family affair, their son, Constantine, a student at the Parsons School of Design in New York, did the menus and branding, and daughter Maria is the hostess.

Befitting a family-run operation, Stella’s is handicapped-accessible, accommodating of children and vegetarian friendly. The décor is modern and the style casual — bamboo table tops, an L-shaped bar, with a silent, but unwelcome television, a long, communal table, with a portrait of a younger Stella and family photos on the walls.

The menu and atmosphere are uncompromisingly Greek — from the wine, beer, appetizers, entrees, desserts and strong coffee — to Hellenic music and classic movies running silently on the back wall. Entrees range from $12 to $25; lunch, brunch and appetizers are about half that. Weekday “meze ora” offers small plate and beverage specials.

The star of the evening is likely to be a whole fish — branzino, sea bass, dorado — or whatever’s fresh. Another night it is red snapper too big to be served whole; it’s grilled to perfection and needs little enhancement other than a dressing of olive oil, lemon and salt — the latter a distraction for some of us, but an essential touch for my wife. Typically the fish is complemented by orzo, a seed-sized pasta mixed with bits of spinach.

Crab cakes, one of Stella’s signature offerings through the decades, are gently seared and big and chunky enough to win a prize at a Maryland fair. Lamb is omnipresent at dinner, lunch and brunch. A braised shank ($19) is fall-off-the-bone tender. At brunch, a lamb burger ($9), smothered in a yogurt-cucumber dip and topped with a fried egg, makes me forget about eggs Benedict.

Fortunately it’s the season for smelt, those tiny, translucent fish that are best when prepared simply and eaten in multitudes. Stella’s meet the test, lightly floured and fried, arriving in a glistening pile tasting crisp, rich, oily and mild.

One dish that proved too authentic for some diners was sautéed shrimp — unshelled, head and tail on — immersed in a thick tomato-and-cream sauce fired by a shot of the Greek liqueur ouzo. Diners complained about having to peel the shrimp, so the shells are now removed in the kitchen.

A half-dozen comfort dishes, large enough for entrees, include a mouth-watering pastichiatho ($13), layers of slippery fat noodles tossed with a long-simmered meat sauce seasoned with nutmeg and cloves. It’s topped with a grated kasseri cheese and sprinkled with ultra-thin strips of fresh basil.

With Stella’s longtime fans flocking to the 68-seat restaurant, a few Malvern Gardens neighbors expressed worries about noise, but it turns out their concerns were misplaced. There’s a terrible noise problem, but it’s inside. At peak hours the combination of a tin ceiling and a concrete floor made conversations nigh impossible. Newly installed acoustical wall panels have helped but it remains a noisy room, so foam will be placed beneath the tables and a softening cloud dropped from the ceiling.

Buzz about the new Stella’s created “a crazy first three weeks,” Katrina Giavos says, and reservations often are difficult to come by, so most patrons arrive expecting a wait. Suffice it to say, it’s worth it. S